One Day of Living Large

August 05, 2007
Since Mr. T's birthday fell on a Tuesday this year so we didn't get a chance to celebrate with his family until the weekend. First of all, Mr. T is pretty lucky as this would officially be his 3rd birthday dinner. My birthday is coming up in Septmeber so you'd better believe I've got 3 places picked out!


Since we were having an early dinner we meet up at Landmarc in the Time Warner center at 4:00. The TWC is famous formany upscale resturants such as Per Se and Masa. Landmarc is one of the newest additions to the mall.

Although most of the tables were filled we easily scored some seats at the bar. Landmarc is basically shaped like a rectangle with one side facing the mall and two sides with large windows that look out onto the streets of Manhattan.


Unfortunately the tall buildings right next door blocked much of the sunlight and I found Landmarc to be a little too dark. I noticed our bartender seemed a little depressed and I wondered if it was because of the lack of sunlight on, what was a gorgeous bright summer day.

That being said, the lack of light was my only small complaint, I really enjoyed everything else about the place. Directly behind the bar was the open kitchen which added a great vibe to the room. It was fun to sit and watch the food being cooked. The burgers they were making were enormous and smelled wonderful! Mr T's mom and I couldn't seem to stop staring at them and probably would have ordered one if we didn't have a huge dinner coming up.


The best part of Landmarc had to be the wine though.


Landmarc has an extensive wine list that includes both half and full bottles of wine at extremely reasonable prices. This is a great place to come with a group of friends and try out some different types of wines without breaking the bank. 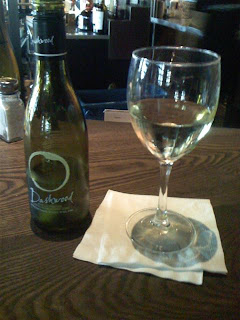 I was excited to see they had the Dashwood Sauvignon Blanche from New Zealand on the menu. I love this wine and at $14 for a half bottle it's a bargain! It really worked out to being about $4-$5 a glass! This was $4.00 cheaper than the wine we had the other night at a local pub(Jake's Saloon- don't ever go!) You won't find a better option in the area.


Since we were so happy with prices here you would think we would have stayed for a couple of bottles of wine, right? Well.....


Instead we thought- hey we just saved so much money, we can afford to splurge a little on a drink in the Mandarin Orientals bar next door! So we headed over.

I was excited because I had never been inside the hotel. It was absolutely gorgeous. We took the elevator to the top floor and where the lobby is located. This is the view from the Lobby Lounge. 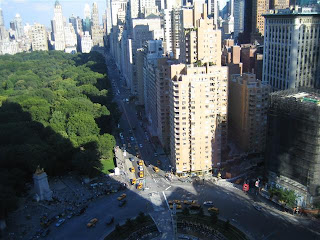 Wow- It was stunning. Huge windows overlooking the park and Columbus circle. It was really spectacular. Views like these don't come cheap though. The drink menu was a tad more expensive than Landmarc! I decided to order some sort of Peach Martini and Mr. T's dad had a Rob Roy. 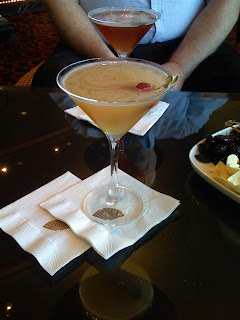 Yum! Just looking at the picture makes me want to go back and get one. It was a fantastic cocktail! There was definitely lots of alcohol inside but it didn't taste strong at all. If I was rich I would drink these babies all night! Maybe this is why Lindsay Lohan has so many problems.

I wish I could say this was the most expensive cocktail I have ever had but alas, this is New York and there are more than a few spots that charge this much or more for a cocktail. We went to the Rose Bar at the Gramercy Park Hotel on Mother's Day and cocktails were $20 a piece! I remember the good old days going to their bar with my parents and getting a beer for $5. How things change...

Anyway back to events at hand. Every table in the Lobby Lounge had a bowl of floating flowers on it that were absolutely beautiful. 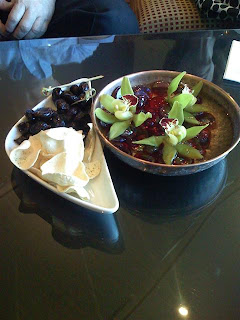 They also brought over some black olives for us to much on while we drank that came with some very spicy tortilla chips.

Since I knew I wouldn't be able to afford coming back here for a while I decided to make the most of it and scoped the rest of the place out. Of course this means checking out the bathrooms. They did not disappoint! 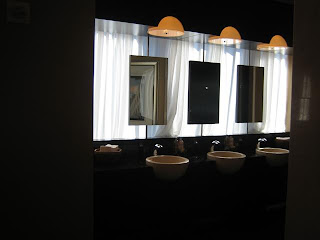 This is a picture of just the sinks. Everything inside was marble and so clean the tiles were literally gleaming. I had pictures of the rest of the bathroom but they seemed to have gone missing. If I can find them I will certainly post them here because these really were fantastic bathrooms.

In the end, Mr T's parents ended up picking up the check which was incredibly generous! When I win the lottery or start rolling in the dough for my famous food blogging abilities I'll definitely be returning the favor!

After our cocktails we walked over for our dinner. Nobu 57 is the newest of the NYC Nobu restaurant's and the most impressive as far as space and decor are concerned. There were barrels of sake piled in the corners and bamboo covering various parts of the wall. Where the other Nobu restaurants go for a minimalistic approach, this place was going for fun and trendy. It definitely hit the mark.

We decided to order a bunch of plates and share everything family style. We started out with Yellowtail sashimi with Jalapeno. 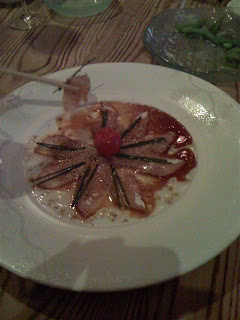 The jalapeno gives just the right kick to the silky smooth taste of the sashimi. People always kind of knock Nobu for focusing too much on their hot dishes and not enough on their sushi and sashimi. After trying this dish I highly disagree because in my opinion it was flawless. 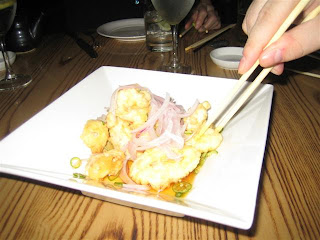 Our second dish was the King Crab tempura "Mazu". This was probably one of my favorite dishes of the night. The crab was cooked with a very light batter and the ponzu sauce was great for dipping the creamy crab into. 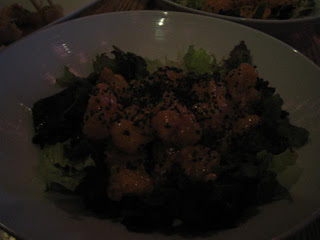 We followed up the crab with two orders of rock shrimp tempura with creamy spicy sauce. This was the only dish I was a little disappointed in. This used to be what I always ordered at the other Nobu's because of the creamy sauce. Somehow I thought this one fell a little flat and I'm not sure why. The shrimp were bigger than normal and the flavor seemed to be a little lacking It was still a good dish but not the best showing I've ever had. 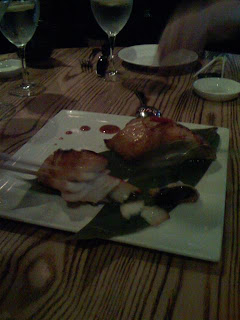 Then came the dish Nobu is probably the most famous for the Black Cod Miso. If you go to Nobu I highly suggest you try this dish. The fish falls apart as soon as you cut into it and it has a caramelized miso top that is one of the best sweet and savory taste combinations I've ever had.

We finished up dinner by splitting some desserts of which my favorite was the Banana Caramel Soy Toban Yaki. This was bananas that had been caramelized in soy sauce and then topped with roasted candied pecans and Malaga ice cream. I would have gotten a picture but I couldn't put my spoon down long enough to grab a shot. Why do desserts have to be so good!

No trip is complete without a quick stop to check out the bathroom. 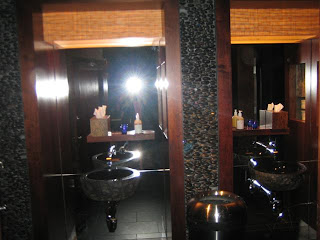 The bathroom was much like the restaurant. A little over the top as far as decor but nice. The only thing it was missing was the serene music of a babbling brook or ocean waves that the other Nobu's play in theirs. All in all, a fantastic meal!

We decided to head out towards home and began walking east. Along the way we walked by the Peninsula Hotel and decided that the day would not be complete without one more stop of extravagance. So we went inside and took the elevator to the very top of the hotel to the Pentop bar.

After a few moments we were able to snag a table outside on the terrace. They brought us over some honey roasted nut mix which of course I began to devour even though I could hardly walk a moment earlier because I was so full. 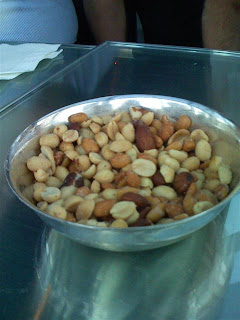 We each had a drink and relaxed, taking in the view. 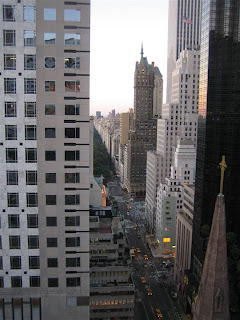 The view here wasn't as nice as the Lobby Lounge (listen to me, acting snobby about places I can't even afford), but the warm summer air felt so nice on top of the roof. It was such a relaxing end to a thoroughly indulgent day.

So Mr T's birthday extravaganza is finally over and it was an outstanding success. You only turn 30 once. Thank goodness or we'd all be in the pour house! What's on the horizon? Back to the basics: grilled cheese, hot dogs and Coors Light.

Anonymous said…
Nobu is auctioning off a fantastic dinner at a charitable auction. There are a ton of other great food and wine related things to bid on. Check it out. http://www.cmarket.com/auction/item/Browse.action?_sourcePage=%2FauctionHome.jsp&categoryId=38456498&auctionId=46129071
October 9, 2007 at 4:25 PM