August 02, 2007
I was craving some wings tonight because well... when am I not craving wings. I wasn't feeling like a regular Buffalo style wing so we decided to go for some Japanese.

Tebaya is a tiny little place in the Flatiron district that specializes in Japanese finger food. They have a couple great items on their menu but are known most for their Teba Chicken Wings. They use the same recipe for these wings as the ones they sell at their store in Japan. 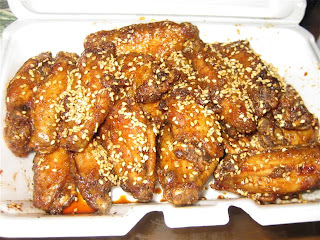 As you can see from the picture, these aren't your average wings. They are fried twice in soy oil which removes almost all of the fat from the wing itself but keeps the juiciness of the chicken inside.

Once the wings are fried they cover them in a Teba sauce which is basically a garlic sauce topped with toasted sesame seeds and black peppers. The final result is a wing with extra snappy skin, juicy meat and no visible chunks of fat.

The best part about this place is the man who runs it. He is probably the friendliest guy to order from on the phone and our food always comes in less than 20 minutes. This is a great fast and cheap option if your in the area.