August 04, 2007
I was grocery shopping at Whole Foods the other day and decided to swing by their beer section to see if they had anything new and interesting. As I was looking through the beers a man came out and started putting some bottles on the shelf that I had never seen before. As I walked over I noticed the big B on the label and realized it was the new Brooklyn beer I had hear about.

Zum Schnieder had just hosted a party last week in celebration of this new beer. Apparently the Brewmaster of Schneider brewery and Brooklyn Brewmaster Garrett Oliver have been friends a long time and decided to make a beer together. I love almost all of the Schneider beers and Mr. T and I went to a beer class that was taught by Garrett Oliver and just loved him. So I was extremely excited when I saw the bottles and grabbed one right away.

Work was tough this week so it wasn't until Friday night when I finally got to try it out. 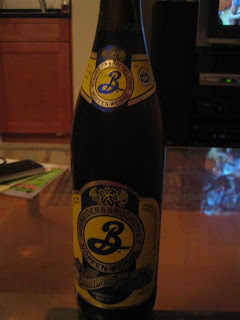 Upon pouring the beer I was a little put off by the color. It poured a murky orange brown and had a huge head on it. The foamy head was nice as it resembled most German beers I've had. The smell of the beer was very strong of bananas and cloves. 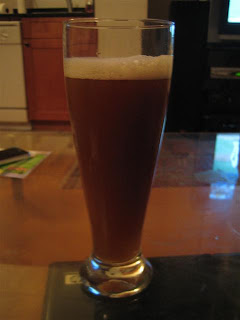 Once I gave it a try I realized that it tasted just like it smelled. Bananas, cloves and pepper were very evident. It was interesting because it tasted like a wheat beer and an IPA in one. I'm not sure if I liked it or not. It was a little too hoppy for me. I think it would be better if it mellowed out a bit. I'm thinking about buying one and aging it a little to see if that smooths the taste out. It has an alcohol content of 8.2 and you really taste how strong the beer is. Overall I was pretty disappointed. I guess I'll just stick the my regular wheat beers for the rest of the summer.
beer