July 10, 2013
We took the train up the Hudson River last week to sample Peekskill Brewery.  I've been absolutely obsessed with their Simple Sour so this was a chance to check out some of their other offerings.  The brewery is big, with the main bar and barrels on the first floor, dining on the second and space for private events on top.  We sat in the dining room to enjoy a full relaxing meal.  I was sad to see they didn't have Amazeballs on the draft list that day but once I got my flight of beers I was pretty happy:) 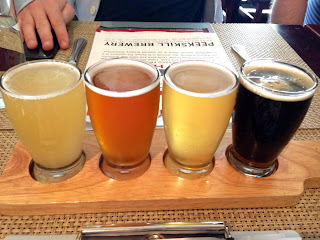 We started our meal with a few brunch appetizers like this bowl of warm sugary Beignets... 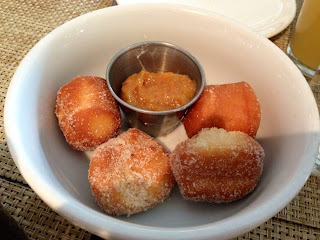 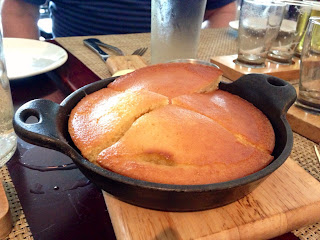 Since the sweet component of brunch was satisfied with beignets I went savory for the second half with the PB Burger. 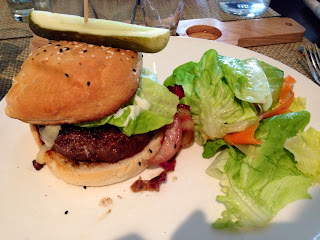 This hefty sandwich had big slabs of Applewood Smoked Bacon, Grafton Cheddar and garlic aioli on top. I asked for salad on the side instead of the usual fries, ensuring I had room for one more beer before we left. 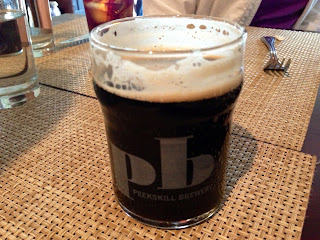 I had the Liger was a lot darker than I expected with lots of malt and toasted rye.  While Mr. T enjoyed a half pint of the dark Midnight Toker.  It was a nice way to cape off a boozy beer brunch. 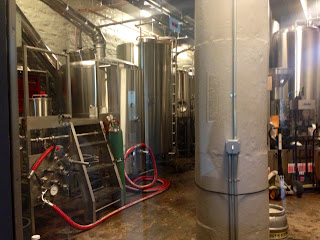 We took a look at the brewing equipment before we left. It's amazing how sleek and new everything inside looked.  It really had a nice modern feel.  We decided to take something to go so we filled up a Growler of Eastern Standard IPA and hopped back on the train. 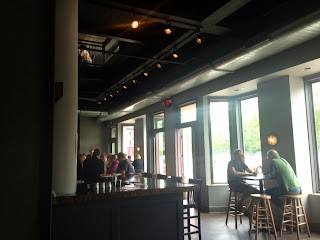 The brewery in only about a two minute walk from the Peekskill Train Station so getting here from the city was a breeze.  This is an awesome new addition to the beer scene and one I'm psyched about having in New York.

Anonymous said…
Thank you so much for coming to see us! It looks like you enjoyed your visit. Just one thing I'm sure there was a mistake made... That looks like a half pint of Midnight toker not the liger! I'm sorry you didn't get a chance to taste liger but Midnight Toker is great too! Maybe it's an excuse to come back as well as amazeballs is back on? Cheers
July 10, 2013 at 6:30 PM

Roze said…
The Liger was a lot darker than expected that makes total sense. Well as you said another reason to come back...although I don't even need that. I'll come anytime:)
July 10, 2013 at 8:47 PM