April 25, 2012
Fraunces Tavern is ’s oldest surviving building dating back to 1762.  It’s had many reincarnations in the past but most recently it was reopened by ’s Porterhouse Brewing Co. and they are serving up some fantastic beers. 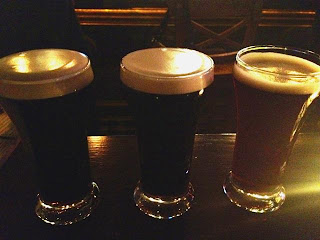 Both Mr. T and I decided to do a flight while we were there focused on the Porterhouse beers.  Each one had a nice hearty flavor and balanced texture.  I think my favorite was the Oyster Stouts while Mr. T  leaned more toward the Plain Porter.  We decided a little snack would be nice so after a quick peruse of the menu we decided to split the slider tasting listed as a burger, cheeseburger and pulled pork. 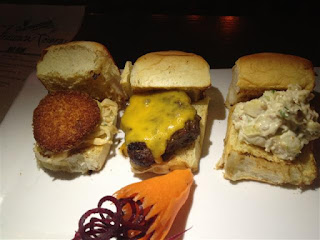 As you can see we were quite perplexed when this arrived.  Instead of the pulled pork and burgers we received a crab cake slider, chicken salad and the usual burger.  Apparently they forgot to update their menu with the new options.  Oh well- it wasn’t anything bad just your typical pub fare.

We spent a good amount of time there- trying out different beers and enjoying the rustic old atmosphere.  What’s better than having some beer with a history lesson.