Return to Pearl Oyster Bar and A Big Surprise!

August 12, 2009
So after our wonderful brunch at Onda on Saturday we spent the afternoon walking around the Seaport and enjoying the weather. We checked out the newly opened Water Taxi Beach. It’s kind of neat but kind of weird with people hanging out in bikini’s left and right. I mean it is a fake beach but it’s right near Wall Street right?

Then it was time for the Yankees to play the Red Sox so we hopped in a cab and headed to the Blind Tiger to watch the game and enjoy some good beers.

Now the plan had been to go to Blind Tiger and then run over to Pearl Oyster Bar at some point to put our name on the list. So about 6:45 I decided to check it out. I didn’t see any line while I was walking but I was still nervous. Pearl is ALWAYS packed.

I looked inside and couldn’t believe what I was seeing! Tables, bar stools, empty! Lots of them! I went back and told Mr. T I didn’t think we had to worry. So we watched the rest of the game and returned about an hour later and got the last table in the back right away.

Blame it on summer; blame it on the recession- whatever. We didn’t have to wait in line so I was happy!

We started out with a big old pot of Steamers. 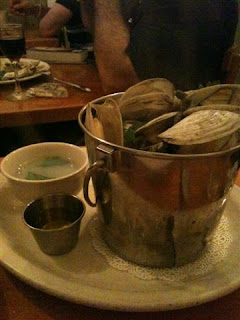 OMG I love the Steamers here! They were steamed perfectly so they retained a good amount of moisture and were soft not rubbery. They came with a generous portion of clarified butter that we didn’t even come close to finishing even though the bucket was the size of my head!

For the main course I got the coveted Lobster Roll which I always order. 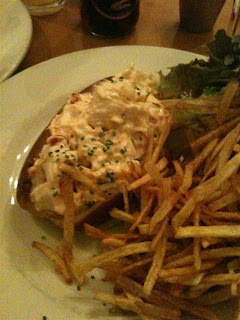 Now I’ve had this Lobster roll at least 5 times in my life and I have to say I’ve never had a bad showing. Although I am getting to like a roll with less mayo in my old age, the chunks of lobster meat seemed even bigger than the last time. 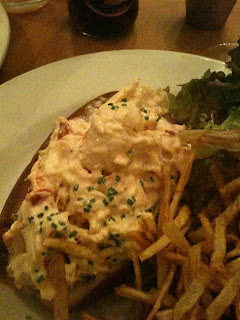 As always the shoestring fries were excellent. I love putting a couple of the long skinny fries right inside the sandwich. Then you get a little salty crunch with each rich lobster bite!

During dinner Mr. T and I talked about our very first time at POB. I was actually visiting from Buffalo while we were still in college and it was my first week ever being in NYC. Besides some pizza and Gray’s Papaya hot dogs, Pearl was our first fancy (and expensive-yikes college!) meal together.

It was nice being able to reminisce.

By the end I was so stuffed I could hardly move. Mr. T wasn’t doing much better so we hopped in a cab and headed back home.

It was still such a gorgeous evening Mr. T suggested a drink on our rooftop to end the night. I thought that was a great idea! I grabbed a couple of beers for us and we headed up.

We walked over to our usual spot where there is a fantastic view of the Empire State building and most of Midtown. I was busy taking in the beautiful view when I heard Mr. T say he wanted to ask me something. I knew right then and there what was about to happen.

All of a sudden I was really nervous. I knew I wanted to give him my full attention so I tried to gently set my beer on the railing. Of course it didn’t stay put like it was supposed to. Somehow that stupid bottle slipped out of my hand and went crashing to the ground, spilling beer and glass everywhere!!!

I turned around in horror to see Mr. T going down on one knee (right where the puddle of beer was quickly forming), ring in hand about to propose. For a second there was a very awkward silence….and then we both burst out into laughter.

What would a romantic proposal be without me and my klutziness being a part of it!

So long story short I am now engaged!!!! I love my ring, I loved the rooftop proposal and of course I love Mr. T. I’m quite happy.

So it was quite a wonderful weekend- the Yankees swept the Red Sox, I had one of the best brunches ever and Mr. T and I got engaged. I would say it was a pretty good time to be a girl in the city!
Pearl Oyster Bar