August 04, 2009
The last meal of Mr. Pruner’s visit and he still hadn’t had a burger. The one thing he said he really wanted to get on this trip was a good burger and I hadn’t produced yet.

I was planning to take him to Prune for their English Muffin bonanza of beef on Thursday, but his plane was delayed and we lost our reservation.

Now it was Saturday night and I wasn’t sure what to do. Our three person group had grown to seven and everyone was looking to toss back some beers and chill out.

It was such a nice day the Stoned Crow seemed too underground, PJ Clark’s too far away, Shake Shack way too long a line. Then I thought of Royale, one of my favorite bars to grab a great burger and sit outside with some beers.

We hopped in a cab and headed to Royale only to find out they were closed for a private party.

Drat. We had taken a cab all the way down to Alphabet City and our only burger and beer idea was shot.

We started walking around kind of aimlessly looking for some ideas when Mr. T suddenly remembered that Black Iron Burger Shop was nearby.

I had never tried it out but if burgers are their specialty they have to be good right?

We walked into Black Iron and found it quite a tiny space. They kind of jammed the 7 of us back in the corner table explaining that they couldn’t move the tables at the front together because it just wouldn’t work.

So we squeezed in and ordered up some beers from their short, but impressive craft beer list.

For our mains almost everyone ordered the burger medium rare with cheddar cheese. 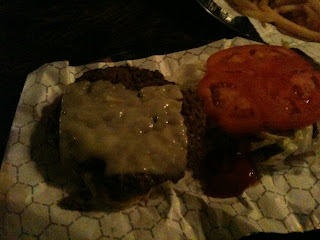 The patty was a lot thinner than I thought it would be and kind of greasy. The bun didn’t fit the size of the wide burger but did a good job of soaking up all of the juices.

I have to say I really enjoyed this burger. I like a greasy burger now and then and this one was dripping with grease and had a great beefy flavor that went well with the cheddar cheese.

The fries were pretty good as well- long, skinny and crisp. 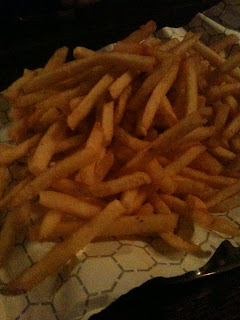 However the star of the show would have to be the Onion Rings. Man these things were huge and had the best salty, sweet, I want to gobble you up in two seconds flat even if it gives me a heart attack flavor!!! Whew!!

All that being said however, I’m not sure if I will be back right away.

First of all I told you about the cramped seating. When we left, I noticed a group of seven had come in and pushed the tables up front together like we had asked to do. I don’t understand why they accommodated them and not us?

Second of all, if you bill yourself as a burger shop, than I expect your burgers to be pretty spectacular. Overall they were pretty good but no where near to being up there as far as burgers joints go. In fact- when I think about burger places in the city this place probably won’t even come to mind.

However if I’m craving onion rings it probably will. So maybe they should call it Onion Ring shop?

Oh well- we were in desperate need and it did the trick. Next time the Pruner visits I may have to make up for it by having a purely burger weekend. That sound pretty damn good to me.