Interesting Brews at the Blind Tiger

August 27, 2009
Blind Tiger had a ton of Sly Fox beers on tap last weekend and a couple really stood out. One in particular was the Sly Fox Incubus.

This is a Belgain style Tripel that poured with a fair amount of head and a bready sweet aroma. Since this beer weighs in at 10.3% alcohol, I couldn’t believe how drinkable it was! It had a very sweet taste, almost like honey that was rounded out by a slight spicy kick on the finish. A very nice beer I would get again. 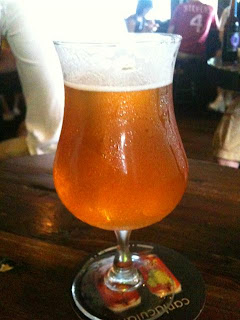 Unfortunately the other two Sly Fox beers I had were not very good at all. The Oktoberfest had a strong skunky taste to it and the Sly Fox Grisette was just plain weird. It poured slightly darker than a glass of pineapple juice and had almost no beer flavor. Everyone at the table tried it and not one person thought it tasted good. It is possible however,. that all the strong beers before trying this might have damaged our palettes a little. Maybe I’ll give it another shot.

They did have one surprise- a new spin on an old classic- DogFish Head 90 Minute (via Randell) What is the via Randell part you may ask? Well this guy explained it great in his blog here

But it’s basically adding extra hops to the beer as it leaves the keg. Only Sam Calagion would come up with something like this. He’s the founder of Dogfish Head and quite an interesting character. The New Yorker did a great piece on him last year. I highly recommend reading the article if you have the chance.

Anyway the added hops in the end process created a very different flavor to the beer. It was a little bit silkier in the mouth and definitely had more pronounced hops both on the nose and on the palate. Very interesting to be able to try.

Blind Tiger is truly a beer lovers dream. A great homey environment, nice regulars at the bar and a wonderful rotation of excellent craft beers.