August 21, 2009
Saturday we spent with friends touring around the city from Sardi’s in the Theater District all the way down to the NYU part of town on MacDougal Street. We tried to pretend like we were in college again and played some beer pong at Off the Wagon. You know what I discovered? I am NOT in college anymore and I can not drink that much. So after 2 short games I was a little tipsy and ready for some serious food.

We walked outside to get a cab over to the East Village when I remembered Minetta Tavern was right next door.

I’ve tried to get into Minetta Tavern a bunch of times now. Every time we walk by I stop in and ask if there’s a table and I’ve called for a reservation at least 4 or 5 times as well. Every time my request is answered by the same response- “We have an 11:30 available”.

Okay I don’t know about you but I’m thinking about sleepy time around 11:30 not a big meaty dinner.

Well this Saturday I decided to try again. I walked inside right at 8:00 and asked for a table for four.

I was so sure they would say no I was already turning around to walk out the door when she said “Right this way.”

We got seated right in the middle of the main dining room. I absolutely love the feel of the place. The secret underground kind of vibe, the vintage murals on the wall, the hustle and bustle of the crowd, everything!

We were starving so we got right down to business and ordered our entrees. I went for the much lauded Black Label Burger and Mr. T got the regular Minetta Cheeseburger.

Okay the pictures came out horrible but I kind of like the dark shadowing of my hands. It reminds me of the speakeasy vibe of the place so I’m using them anyway. 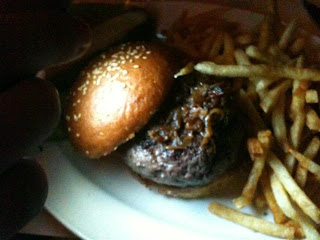 Wow. This was definitely unlike any burger I have ever tried in my life. It was a blend of short rib, brisket and skirt steak. The meat was almost creamy in texture with a salty crispy char on top. It tasted like a steak that had been dry aged and then ground down into patty form. It was cooked exactly as I asked- medium rare- and had a crazy earthy quality that is almost too difficult to describe. It came topped with some caramelized onions that were so fantastic I almost asked for more.

Okay- call me crazy but as much as I liked this burger I just couldn’t love it. It completely lived up to the hype, it was utterly amazing in texture and flavor but it just wasn’t for me. It tasted too much like steak. When I want a burger, I want a burger. When I want a steak I want a steak. Part of me found the two combined just strange and I didn’t really understand what part the toasted bun played when the meat was so fantastic on its’ own.

Luckily there was another burger on the table- Mr. T’s regular Pat La Frieda cheeseburger. 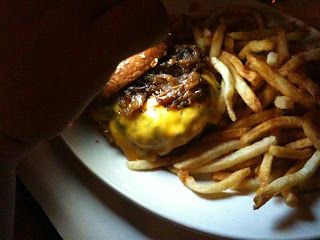 Now this was a burger! Again it was cooked perfect, a blend of short rib and brisket, with a nice deep red middle and a salty char on top. Then they topped it off with some fabulous cheddar cheese and more of those amazing carmalized oinions. This was a classic example of a burger done well. It was moist, a little greasy and had a perfect bun to beef ratio. I absolutely loved it!

Well it turns out that Mr. T absolutely flipped over the taste of the Black Label burger. He loved the cremy texture and earthy flavor of the meat- so we switched! It worked out pretty well for both of us.

The burgers came with a serious amount of fries on the sides that were so skinny they were almost shoestring but not quite. Very delicious.

So the burgers were amazing just as everyone has said but that wasn’t even the best entrée at the table.

Our friends had decided to go a different route and ordered the Trout and the Bone-In NY Strip.

Okay the Trout was nothing to write home about that’s for sure. Maybe we were all just in such carnivorous moods or something but it just fell completely flat. The steak however…OMG the steak!!!!

Just thinking about makes me drool a little. This was one of the best steaks I have ever had in my life. I can’t even describe how good it was. When I read Frank Bruni’s review of Minetta Tavern he described the steak almost by describing what it didn’t have compared to Peter Lugers and I have to say I agree.

Don’t get me wrong- I am a complete lover of all things Peter Luger (well except the steak sauce) but somehow this steak rocked in a different way. There was no melted butter on top, no super crunchy exterior, just a slightly charred, super drippy, incredibly moist piece of flavorful meat.

Would I say it was better than Lugers- I’m not sure? I don’t think I tried enough to make that kind of statement. I will say that I have been craving it like a madman this week. I have literally thought about it every single day and I may have to go back this weekend just to get my fix.

We were so stuffed at the end of our meal that we couldn’t even think about dessert. I wish we could because the soufflés walking by looked absolutely magnificent.

I would say without a doubt that Minetta Tavern rocks. You have to work incredibly hard to get a table-that is true; but in the end it is totally worth it. The cool vibe, the excellent service and the ridiculously good food make up quite the perfect package. Keith McNally has truly done it again.