August 28, 2009
Ahhh Mercadito Grove….Remember this place? The one with fantastic fish tacos but surley and unprofessional service?

Well I retuned against my better judgment the other day. I had been craving fish tacos and we were meeting friends later at Blind Tiger. It just made sense since they were nearby.

So Saturday afternoon we walked down to 7th Avenue South for brunch. The hot humid weather gave way to a sun shower and by the time we arrived we were both quite soaked. We got a seat at the front table and drank in the air conditioning above. Even though it had rained we were still sweating from the thick humid air.

I knew I wanted fish tacos and Mercadito has a $15 brunch special that includes the tacos and a drink. Mr. T got an orange juice and I went for a mimosa. The waiter asked me if I wanted any fruit flavor added to my drink. I wasn’t sure what he meant by that but I decided to go with Strawberry. 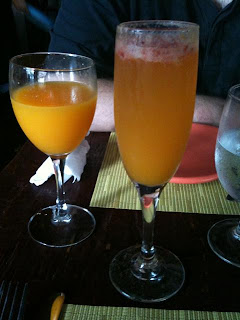 My drink came and there were pieces of strawberry floating on the top.

This wouldn’t have been an issue if the chunks’ were smaller but they were long and stingy. Each time I took a sip I started to gag on the slimy long bites of fruit. It was really disgusting texture wise. After a few sips I fished them out so I could enjoy my drink without fear of chocking.

For our entrees we both ordered the fish tacos. Okay here is where the service issues start to come into play again. Although we had received our menus quite quickly our waiter took forever to come back and take our order.

Once we finally placed our order another couple came in and sat beside us. This couple had a different waiter who was apparently much better since they ended up receiving their food at the same time as us even though they came in about 20 minutes later.

I’ll get back to the service in a minute- but onto the food. 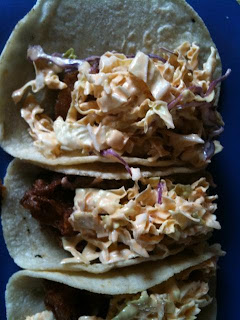 The fish tacos came just as always- beer battered Mahi Mahi topped with a spicy Mexican style coleslaw. At first I thought the tacos were bigger than usual but then I realized the fish simply had more breading. A little bit too much breading in my opinion. I used to enjoy all four tacos and be pleasantly full. This time I got full halfway through the dish and my stomach felt like a ton of bricks. I enjoy a lighter breading for fish tacos.

Well Mr. T and I finished our meal and got ready to pay the check. Now here is where the service just got kind of annoying. Our waiter had been standing behind us the entire time we were eating just kind of staring out the window. He never checked in to see if we wanted more to drink or to ask about our meal. Then rather than bringing over our check once the buser cleared our plates I practically had to flag him down by waving both hands.

It’s not like this is a big place either folks! It’s tiny! So the service issues still seem to be going at Mercaditio Grove which is too bad. I swore last time that I would only go to the East Village location. This is what I get for going back on my word. Next time I swear it’s Avenue B or bust.
brunch Mercadito Grove