A Day In the Park

August 19, 2009
Our old college friends were visiting this past weekend and we had basically a non-stop party. They got in late Thursday night and we went out for Thai food in our neighborhood. Friday we awoke and felt like the same type of food! So we ended up at Sea Thai in the meatpacking where we proceeded to walk the Highline.

The true reason for the friends visit, besides to see us, was to go watch a Mets game.

Yes, my friends are Mets fans and that’s okay!

So we headed to Citifield for the first time this year. I love baseball but I was mostly excited about the food this time since the Mets aren’t exactly doing so well.

We got to the stadium and after about the third inning we headed over to Centerfield where all the fancy concessions stands are- Blue Smoke, Shake Shack, Box Frites, etc.

First we stopped at the middle beer stand where they had a ton of good beers listed. Unfortunately the woman behind the counter had either just woken up or smoked a huge joint before work, because she was slow and spacey to say the least.

A line of 6 people took almost 20 minutes. I mean come on- it’s not like you’re cooking anything. Just put the beer in the cup! Then when it was our turn to order they were out of my first two choices. I was not having any luck at this beer stand.

After finally settling on my third choice (boo!) we walked over to El Verano Taqueria where I was super excited to try their Chicken Mole Pipian with ground pumpkin seeds.

After a few minutes though, it was evident that the taco guys might have been puffing the same huge joint as the beer lady! The line wasn’t moving at all.

We were both a little frustrated at this point and very hungry so we left. We noticed there was no line at Cascarino’s Pizza so we grabbed a couple slices from there.

This is the Grandma slice. 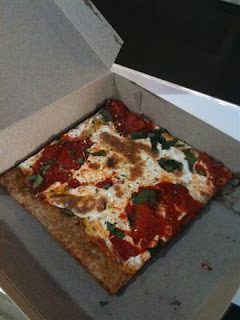 This slice was actually pretty good. The sauce was a little on the sweeter side and there was an excellent ratio of cheese and fresh basil.

The dough was a little bit on the thin side though and extremely soft. Maybe it was the whole wheat crust but it just tasted bland. A little more crunch and some salt could have livened that up a bit.

One other minor complaint was the price- $5.75. That’s pretty steep for a slice that won’t even come close to filling you up.

After the pizza we looked back at the taco line and there was still no movement! We decided to give up on the fancy food and split a hot dog instead (where there was no line but actually took forever as well).

So my Citifiled food experience was pretty disappointing. I did like the new stadium however- it’s about 20 times nicer than Shea. If I had to choose though I enjoy the feel of Yankee stadium better. There’s just something about walking into that huge grand entrance that sends chills up my spine.

After the Mets win we hopped on the LIRR and went back into the city.

I was still hungry and in need of something greasy and filling fast. We were right next to Koreatown so we headed over to Forte Baden Baden. Luckily a large group was leaving right as we arrived and we got a great table by the windows.

Now if you don’t know Forte Baden Baden it’s pretty neat because it’s hidden from the street. There is no sign outside and you basically just have to know to walk behind the newspaper stall to find the stairs up to the 2nd floor.

The special here is Korean Fried Chicken and man is it good!

Some pitchers of beer after arrival, they brought out Korean Fried Chicken wings and the regular Baden Baden fried chicken. 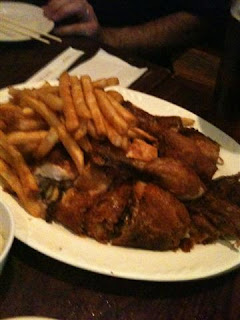 Okay the picture is pretty fuzzy but this fried chicken is awesome. It’s crunchy, greasy and filled with huge chunks of white meat chicken and extra crispy fries. I was in heaven.

The wings were pretty good as well but the sauce on top was so hot I couldn’t even finish one. Literally my lips were on fire for a while after eating. My friend loved them however so maybe I got the super spicy one of the batch.

We demolished our food and walked back to the apartment for a nightcap. Baden Baden was the perfect choice for the end of a long and beer filled Friday.
Citifield Forte Baden Baden