Ribs and the US Open

September 04, 2008
I have always thought Mr. T and I are extremely lucky to live in the neighborhood we do. We are super close to multiple trains and buses, we are surrounded by Danny Meyer restaurants, which are all fantastic and we have the beautiful Madison Square Park right nearby to relax and enjoy the sun.

One of the coolest things about Madison Square Park, besides the Shake Shack of course, is that once a year they turn the north end into a US Open party.

They put up a HUGE screen and bring in some bleachers where anyone can go and watch the matches.

The best part though? They serve beer, wine and food!

Mr. T and I stumbled across this the first year they set up shop and come back to chill now annually.

This year we were pretty psyched to hear that Hill Country was one of the vendors there. So on Saturday afternoon we ambled over to check it out.

We got there around 3:00 and were pleasantly surprised to see they added tables and chairs on the lawn! 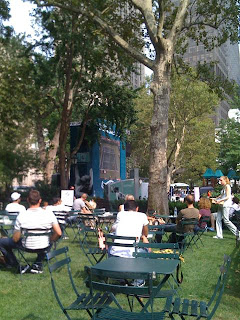 We bought a couple of Coronas and decided to split an order of the Beef Ribs.

For $9.00 I was pretty impressed with the amount of meat they gave us. A lot of times they skimp during these park events but not here. 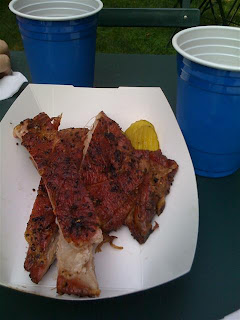 We grabbed one of the tables and watched some tennis.

Unfortunately the ribs didn’t taste as good as they usually do at Hill Country itself.

They were a little over seasoned and tougher than normal.

I think the travel must have hurt them a bit.

I have to tell you though neither Mike and I really cared that much.

I had actually attended a funeral that morning and was feeling drained and emotional to say the least.

But sitting out in that sunlight, relaxing with a cold beer and watching sports with Mr T was exactly what the doctor ordered. I felt about ten times better just relaxing and enjoying the day.

As we were sitting a squirrel came right near by looking for a place to bury a nut he had found. 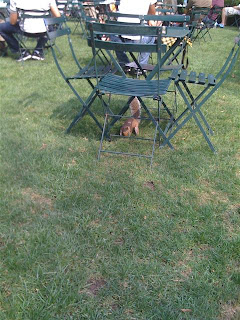 If that’s not a sign that summer is over I don’t know what is!

The matches are being shown through the end of this week so head on over if you get a chance. It’s really something quite special.
Hill Country