The First and Last Lobster Roll of Summer

September 02, 2008
If you look back to my posts last summer you'll see that Mr. T and I pretty much were having a lobster roll a week!

This Summer we decided we had to reign ourselves in a little but we did a little too much. We hadn't had one at all!

You can actually get lobster rolls year round but there's something about having them in the summertime that just makes them extra good. So realizing that this was technically the last weekend of summer we knew we needed to get our Lobster Roll fill Stat.

So we met up with some friends on Friday and headed to Pearl Oyster Bar.

The place was packed as always so we put our name in and came back about a half hour later. We were told we would only have to wait a few more minutes so we took a seat in the window and had a drink.

The few minutes turned into at least 20 minutes and I have to say I was getting anxious. It's hard watching everyone's food going by when you're starving and I thought about going somewhere else a few times but I am so glad i didn't!

We finally did get our table and we put in our order immediately.

They had a steamer special that day so we decided to split a large bucket. 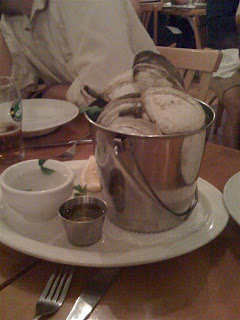 Wow! These clams were enormous!! They were so plump and juicy I could have sat there all day dunking them in melted butter.

They made me as happy as a clam!

Then the main event arrived. The Lobster Roll. 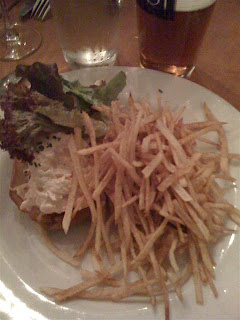 Pearl's lobster roll comes garnished with a little bit of lettuce and a huge pile of shoestring fries. Some people dislike the shoestring fries but I think they're fantastic!

Each one is perfectly salted with an excellent crispy exterior. Yum!

And how about the roll! Check out these huge chunks of lobster! 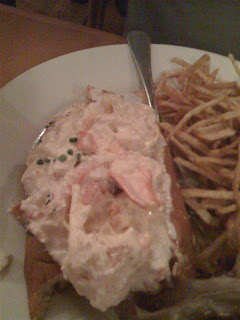 The lobster meat is slathered in Mayonnaise and stuffed into a top loading bun that's been grilled and buttered so its crispy on the inside and soft and squishy on the outside.

The lobster roll was awesome. I noticed it had a little more mayonnaise than it used too. I could have gone for little bit less but it was still fantastic.

Lobster rolls here are going for $27 bucks right now which is pricey but worth every penny.

I think we all pretty much licked our plates clean.

Pearl is hands down the best lobster roll in the city. Mary's come close but it's really just not the same.

I have to say I love the hustle and bustle of Pearl as well. You feel kind of energized in the harried chatty atmosphere.

The only thing I would change about Pearl is the beer selection. They only have three beers on tap and I honestly don't care for any of them.

Oh well, that's a small price to pay for such an excellent meal. And we got it in just before the end of summer!! Success!!
Pearl Oyster Bar