September 23, 2008
We were aching for a good burger the other night but one look at the Shake Shack cam told us the line would be at least an hour. Neither of us felt like cooking either so...we headed to the computer and checked out seamlessweb.

Mr. T and I order in a LOT! Too much honestly. We have started to become sick of our options because we always choose the same stuff.

Well as I was scrolling through the choices I ran across Jackson Hole.

So we placed our order.

About a half hour later this mammoth mound of meat arrived at my door. 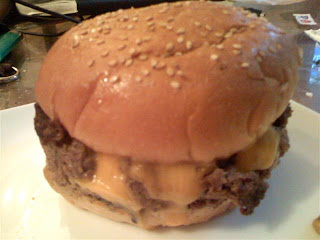 Whoa!! This burger really was huge! I was impressed by the juicy looking exterior and wonderful smell as I opened the bag.

Unfortunately the burger didn't end up tasting as good as it looked and smelled.

The first problem was the temperture.

Had ordered medium rare and this baby was cooked all the way though.

Because of this, the inside was a little dry and not nearly as moist and flavorful as I would have liked.

It was actually a little weird. The outside was almost dripping with juice and grease but the inside seemed to be void of any moisture at all.

Th meat was also a little bit gritty. I think I have been so used to burgers like the Shake's and PJ Clark's where they use good meat and get a nice salty char on the outside.

This lacked both the quality meat and char so I was left a little disappointed. I'm not sure if they cooked it kind of weird or what.

I was kind of surprised of all the great reviews it got when I looked it up.

I guess if I was having a couple of beers at Jackson Hole I may have enjoyed it a little more. The size certainly is impressive at least.

But I've never been a fan of the "bigger is better" mantra. Give me a good quality slider for goodness sake and I'll be a happy camper!

Next time I'll probably just go wait in line for the Shake when I am craving a good burger.

Anonymous said…
The chicken sandwiches at Jackson Hole (with same topping combos as the burgers) are the way to go. They have a huge moist chicken breast instead of the burger. (Gimme a copsegmore or a Soul one any day!)

The burgers are cooked under a lid so they're partially 'steamed.' You won't get a char and a pink rare middle the way they cook them. But it is a lotta meat, and I like them occasionally, even though they are more generic tasting than the Shack or 5 Guys.
March 22, 2009 at 11:01 PM