One For Me, One For You

September 18, 2008
Mr. T was in Pennsylvania for a meeting last week and got a ride back to the city with a co-worker.

He called me to say he was getting dropped off in Chinatown. Since I usually walk home from work that way, I decided to meet him for dinner.

It turned out that Mrs. Wu (Mr. T's co-worker) was meeting her husband as well! So we all decided to have dinner together.

Now the Wu's actually grew up in Chinatown, so they know a little something about the area!

We decided to leave the dinner pick in their hands and they chose Penang.

Penang is a Malaysian/Thai restaurant located on Elizabeth street.

Upon entering I was greeted by the usual feeling I get at most restaurants in Chinatown- a kind of homey bustle.

We sat down and got some beers and tea and looked at the menu which was HUGE!!

There was many different kinds of food it was really quite overwhelming.

Luckily the Wu's said they would order for the table...And order they did!

We had tons of tasty food; crispy orange beef, chicken satay, tripe (okay Mr. T and I didn't eat the tripe but the Wu's seemed to enjoy it). So much food there was really to much to write about.

So I'll just tell you about our two favorite things of the night.

First up- Mr. T's favorite the Home Made Roti Canai. 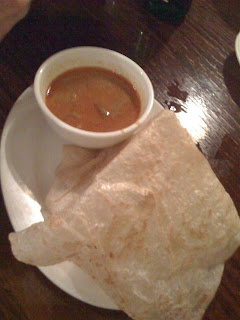 The Roti Canai is a kind of Malaysian flatbread that is made by kneading the dough, flattening it, allowing it to rise and then the whole process is repeated.

What comes from all of that process it this big piece of dough.

As I broke into the hot crusty exterior it flaked away to reveal a fluffy warm inside perfect for dipping into the tasty chicken curry sauce.

I couldn't believe how light and airy this dough was. Almost like a pastry.

The Wu's had gotten four orders of the Roti, which I thought was a little excessive, but by the end of the night they were all gone!

Now while I really enjoyed the Roti, it wasn't my favorite dish of the night.

Oh no...that spot is usually reserved for some sort of sweet, calorie laden dessert that it will take days to burn off my hips.

And tonight was no different. I give you the Peanut Pancake. 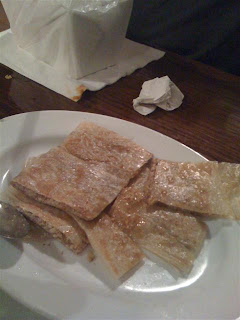 Oh...My...Goodness...this thing was so freakin good!

They took the same kind of dough as the Roti and stuffed it full of ground up peanuts, butter and sugar. The they slathered some kind of sticky sauce, possibly honey, all over the top to seal the deal.

This was just everything I love about dessert without the chocolate!

I couldn't stop eating this thing! The rest of the night I felt like I had a huge rock in my stomach because it was so dense, but man oh man it was worth it.

It turns out that Penang is a chain restaurant with 2 locations in New York and also some in New Jersey, Maryland and North Carolina.

I guess they must be doing something right huh?

All I know is that the Wu's can pick our meal for us anyday and we will be an extremely happy couple.