March 02, 2008
Mr T had to work all day Saturday so I was on my own. I spent the morning shopping at Trader Joe's and doing various errands that I felt like I needed to get done. Once I was finished with everything I came home and realized it wasn't even noon! What the hell was I going to do with myself all day!

I happened to have NY1 on and they did a piece on the Plaza Hotel reopening today. It was like a message sent from heaven! I would go and check out the new hotel!

So I grabbed the train and headed uptown to the Plaza. I decided to make a pit stop first at Fika since it was only a block away. I was super excited for my favorite macchiato in the city but unfortunately it was kind of gross.

There was a new barista working and I'm not sure what she did but my macchiato was pretty bad. This kind of thing makes me nervous. I told a lot of people about Fika and how much I love it. I really hope no one else goes and gets a bad brew. Oh well..in every one's life a little bad coffee must be had- it has been stellar every other time I have been there so I'll chalk it up to an off day.

Walking into the Plaza it was quite obvious that the word was out on the opening. It took me about 3 minutes just to get in the door because of the line of people waiting. Once inside I did a quick walk around.

Only part of the hotel was actually open. The right back side where the Oak Bar and lobby used to be is still closed off for renovations. The new lobby is now to the left and is also where the Champagne Bar is located.

Now to be honest I had planned on getting a drink to celebrate the opening but there were no seats available. The place was packed! Second I looked at the menu and nothing was exactly in my price range! I think the cheapest thing was a glass of Chardonnay for $16.

This wasn't a special occasion or anything so I couldn't bring myself to spend so much on a drink. At least not alone- I would want to enjoy this with someone.

They also served food in the Champagne Bar and everything coming out of the kitchen looked fantastic! They had some sort of lobster and crab slider that looked amazing. I will definitely be back.

After looking around the Plaza some more I decided to head out and walked over to do some shopping on Sixth avenue. I eventually wandered into Times square and found myself outside of ESPN Zone. I wanted to check on some of the college basketball scores so I went inside.

Now I was in ESPN Zone once way before I moved to NY and barely remember it. I saw all of these people heading upstairs so i decided to follow them. Up and up past bar after TV after bar after TV...you get the gist. But then low and behold at the very top it opened up and there was a huge game zone! I mean huge! There were basketball hoops, bowling games, jet skiing, waverunning, golfing game and then your average arcade games as well. It was better than a Dave & Busters!

I had nothing to do so I decided to buy a game card and ended up shooting some hoops versus a couple of 10 year olds. Not my proudest moment but man it was fun!

After about a half hour of gaming my arms were so exhausted they were shaking and I had a little bit of sweat running down my back. I realized that my body wasn't exactly in the same shape it used to be when I was younger. I was feeling kind of bad about myself when I realized hey, being older kind of stinks but there are lots of things I can do now that I couldn't do in High School....Like drink beer! (Not legally at least!) So I decided to go and get a drink!

I grabbed the train down to the West Village and went to Blue Ribbon Bakery. I grabbed a seat right by the window and ordered a Paulaner Hefeweizen. 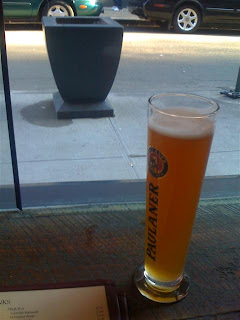 If you're a solo diner this is one of the best places to hang out in my opinion. There's good drinks, good food and great people watching. I perused the menu a little bit and then realized I had a hankering for some oysters.

I am just getting into oysters and really don't know much about them. I decided I should go some place where it's their specialty so I could have some help. I finished my beer and headed down to Aquagrill.

I got to Aquagrill right before the start of the dinner rush and got the last seat at the bar. I looked at the wine list and was really disappointed in their white wine by the glass selection. I decided instead to just get a Peroni.

Now as I was looking at the oyster menu the bartenders were changing hands and got into quite an argument. Basically the dinner bartender yelled at the brunch bartender about not having stocked the bar for him.

Now I know things happen- this is a business but usually restaurants try to have things somewhat behind closed doors. Here the fight was in front of everyone at the bar. It was kind of weird and put me off a little. 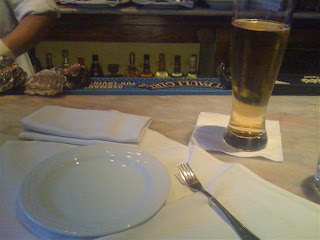 Anyway once the fight ended the bartender steered me toward trying two oysters. The first was a Beavertail Oyster from Rhode Island. 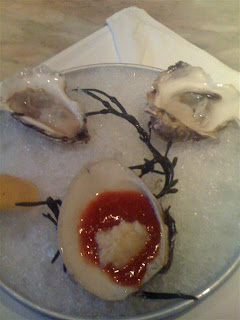 This is the oyster on the right. I really liked this one. It had a slightly sweet taste to it which was really nice.

The other oyster was from Alaska a Canoe Lagoon on the left. 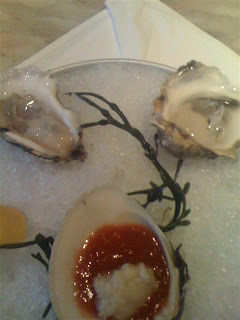 I didn't really like this oyster very much. It was a little too briny for me. I did like however how different the two oysters were. I was looking for something to really differentiate for me the flavors different kinds of oysters can have.

After the oysters I decided it was time to head home. Mr T ended up finishing work a little earlier than he thought and we grabbed some burgers near home at Molly's. Although I had a great time wandering the city by myself it was nice to have some company in the end!