March 22, 2008
We stopped by a new Irish bar last Saturday down in the LES to celebrate St. Patrick's day without the crowds. Luckily the Sixth Ward was exactly what we were looking for. After a day of mostly lounging and shopping we walked in around 5:30 and the place was just beginning to get filled up.

We sat down and ordered some Buffalo Wings and beers. 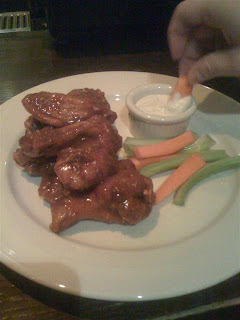 These puppies came out steaming!!! They were right out of the fryer hot and crispy just like they make them in Buffalo.

The sauce was a little tangy, sweet almost, not like a typical hot wing sauce. I almost want to say it tasted a little like honey BBQ but really good. The wings were a good size for NYC as well and not super fatty. A better than average wing I would say.

They also had a decent selection of beers including a Bluepoint Blueberry (sign of Spring!), Weinstephaner Hefeweizen and Red Hook IPA.

The Sixth Ward itself was pretty cool. The inside reminded me a little bit of a hotel lounge with the back lights on the walls but the round booths, ample bar seating and multiple (albeit small) TVs made up for the lights and actually made it quite relaxing.

The biggest draw is the pool table and large outdoor space that is perfect for drinking some beers when the weather gets nice. Outdoor space is prime in the city. Hopefully this place won't get too packed in the summer.