March 19, 2008
So I took the train up to Chappaqua on Sunday to visit with one of my best friends and partake in the Hudson Valley restaurant week. My friend picked me up at the station and we decided to go out for some pre-dinner drinks and catch up a little bit.

Mr. T grew up around this area and I remembered going to a great bar called Peabody’s back when I used to come visit him. I looked it up when I was home and sure enough, they still had a website and everything so we decided to go there.

Well Peabody’s apparently changed it’s name to the Quaker Hill Tavern and we must have drove past it about 5 times when finally we figured out that’s what it was.

The place itself is still the same. Your typical Irish bar with nice bartenders and a great neighborhood vibe. It’s nice because it’s so close to the train station as well. I asked the bartender when they changed their name and he said about 3 years ago! I wish they would change their website as well! I do love their beer glasses though. 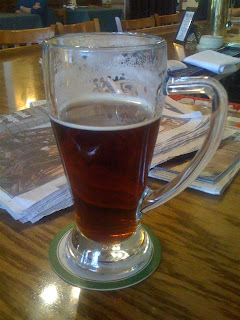 Anyway, after that little hiccup and a couple of beers we headed down to the Crabtree Kittle for dinner. Since it was a Sunday we decided to do an early dinner so I wouldn’t get back into the city too late. We made reservations for 5:00 and when we pulled into the parking lot I was surprised to see it so full. We waved the valet parkers away and found a space in the back.

The Kittle House itself has a nice old school elegant charm about it. It almost reminded me of one of those old estates you find down in the south. We walked inside and were greeted by about six eager hosts and hostesses. They were all very friendly but it was a little overwhelming. After one woman took my coat we were seated in the main dining room.

The dining room itself had the same old school elegance as the front of the house. Every table was covered in white linen and gold mirrors and various paintings were hung on the walls. There were nice big windows on one side, which allowed the sunlight to stream in and brighten the place up a bit.

We sat down and were given the restaurant week prix fix menu, which listed our options for food and a few select glasses of wine. I knew we had planned on splitting a bottle so I asked for the larger list. And larger list I received!!

He came back with a binder that weighed at least 5 pounds! I could barely manage it. I had no idea that the Kittle House had won various awards for their extensive wine list. We both thought it was pretty funny since we were both so surprised. I ended up picking out a bottle of white and we ordered our meals.

Now the nice thing about going out to dinner with friends is the sharing! Sometimes I know Mr. T gets annoyed by me always trying out his food. Here my friend and I decided to split everything.

First they brought over some crusty bread and then our appetizers 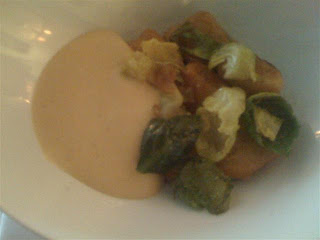 I decided to start with the Sweet Potato Gnocchi with Brussels sprout leaves, lemon and ginger sauce.

Wow. I thought this was really good. The gnocchi’s were nice and soft and the sweet potato flavor mixed with the ginger sauce gave this dish an almost Asian flare to it. Really nice.

My friend opted for the Hudson Valley Farmhouse Salad. 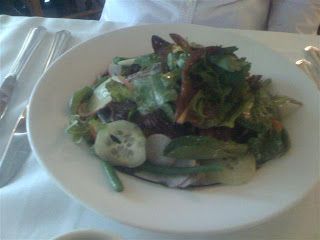 On the menu it described this dish as being field greens, fresh herbs and local vegetables.

I tried a bite and knew immediately there was something in the salad I didn’t like. Cilantro!

Now I have never cared for cilantro and Mr. T is extremely allergic to the stuff so we are always careful when we’re out to avoid this at all costs. I was kind of surprised it wasn’t listed specifically on the menu. Oh well at least Mr. T wasn’t here to get sick.

I had a couple more bites, eating around the cilantro and found the salad to be good. They used a Meyer Lemon dressing on top which I thought could have used a little more kick to it but overall your average dinner salad.

Then our main courses arrived. I ordered the Grilled Prime Sirloin Steak. 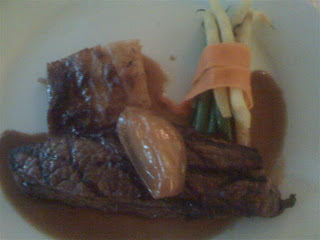 See that little bundle of color there on the side? That’s actually haricot verts that were wrapped up by a slice of carrot. Kind of neat I thought.

The beef came with a very nice cabernet sauce and was topped with a shallot confit. The only part of the dish I didn’t really care for was the potatoes boulanger. To me it was just a really big hash brown. Carrie seemed to like it though, so to each their own!

Although I enjoyed my beef immensely I have to say the other entree we ordered was the clear winner of the night. 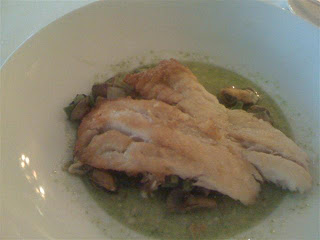 This is the Fillet of Nile Perch. First of all look at the presentation. This huge piece of fish sits atop a blend of mushrooms, asparagus, leeks and mussels. The entire dish is then coated with a basil broth.

Everything just worked in the dish. The leeks and asparagus complemented the basil in the broth and the fish was cooked perfectly.

Our last course of the night- dessert!! 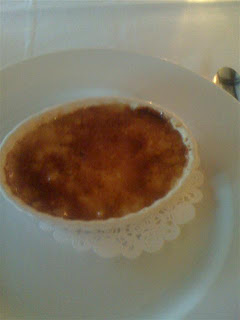 We ordered the Crème Brulee and the Peach Tart Tatin.

The first one I tried was the Crème Brulee. I have to say it had a slightly odd flavor and texture to it. The brulee itself was really thick.almost too thick. And while it was listed as being a Tahitian vanilla bean brulee it had a weird aftertaste that was almost a little sour. 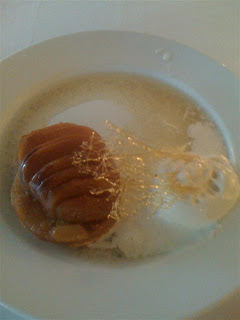 Our second dessert was much better. The peaches were just tart enough and it came with a Meyer Lemon rum sauce that was amazing. We gobbled this up in no time flat.

After our meal was finished we retired to the bar for an after dinner drink. They have a lovely long mahogany bar that is just gorgeous.

Some things I forgot to add overall. The pacing of the dishes was very good. At no time did we feel rushed and we were able to savor everything with ample time in between to chat.

The presentation of the dishes was wonderful as well. Each plate which was brought out was just as wonderful to look at, as it was to eat.

Overall our service was pretty good as well. Our waiter was very accommodating and even though every table was filled when we arrived the service never seemed to slip.

So to sum up overall, for a $26 three course meal, it was an excellent restaurant week deal.
Crabtree Kittle House Westchester