March 14, 2008
It was Mrs. T’s birthday this past week so we all got together for dinner at Allen & Delancey. Our reservations were for 6:00 and we walked in as the first people in the restaurant. Now I had been in here once before but only for a drink at the bar.

The back is absolutely stunning. I loved walking through the heavy red velvet curtains to reveal exposed brick and a ton of candles! Incredibly romantic. I would describe the style as refined bohemian. If that could be a style :)

Now it was too dark to take pictures of anything but here is a picture of the inside courtesy of the Allen and Delancey website. 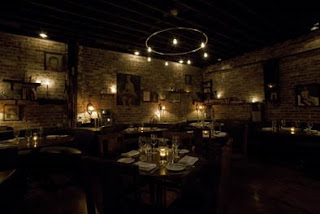 We placed our order while sipping some great cocktails and then our bread arrived.

Oh my goodness the bread is divine! They said it was baked to order right out of the oven. They gave us two pieces, one regular white roll and one bacon and sage.

I ripped into the bacon and sage and steam wafted up into the air. The top had a nice crispy coating of salt and butter while the insides were soft and so fresh! It really doesn’t get much better than freshly baked bread.

We had finished our cocktails and decided to move onto wine for the rest of or meal. We were split on ordering red or white so we decided to get a bottle of each. We had a couple of ideas in mind but asked the sommelier for some assistance.
The sommelier was wonderful. He listened to our requests intently and then gave a couple of his picks based on what we ordered.

Get this- He recommended a red that was $20 cheaper than the one we had asked him about. It was a Spanish wine, the 2006 Petalos and it was fabulous! We had had some snooty service from some other sommeliers in the city and this was a welcome change.

Then our appetizers arrived. I ordered the Sea Scallops which came with a bacon cream sauce, cipollini onions and verjus. The scallops were huge and cooked so that the middle was a little raw which I enjoy. I thought the flavor of the bacon cream sauce with the sour verjus was very interesting. It was a completely different spin on a classic scallop dish that I really enjoyed.

For our mains I ordered the Colorado Lamb Chops Persillade, Braised Middle Neck and Potato puree.

Now I know lamb is fatty but this was a really fatty piece. That being said, the rest of the dish completely made up for it. The garlic and parsley crust on the lamb was excellent and the braised middle neck was really moist.

I tried a bite of the other dishes which were all good but I have to say the Fluke with Cauliflower Cream was amazing! I’m not sure what they did but the little bite I tried was packed with flavor.

The only dish that disappointed me a little was the Cabbage Beef and Onions. The onions and cabbage were delicious but the beef itself had a strange flavor to it. We asked what it was cooked in and the waitress said just the cabbage.

Huh..Not sure what it was but I didn’t really care for it.

I was stuffed at this point but I always make room for dessert!

I ordered a macchiato (which was one of the best I have ever had btw) and the Chocolate Peanut Butter Tart, malted milk sorbet and Whiskey Vanilla shake.

This dessert was good. The tart was a classic chocolate peanut butter tart and the shake was a great accompaniment to the richness of the chocolate. It didn’t really blow me away though.

I think I have to change my dessert orders. I always order the chocolate one and there’ s only so much you can do with chocolate.

I tried a bite of Mr. T’s dessert the Sweet Cream French Toast with Oatmeal Ice cream and Caramelized Banana. It was really good. I’m a sucker for a caramelized banana!

Then the check came and this was just something else that I thought was nice.
As the waitress handed us the check she said “Just so you know the gratuity is already included since you’re a party of six”.

Now this might not seem like a lot but I can’t tell you how many times we’ve probably left double the tip after a long extravagant meal filled with wine and cocktails. And especially in this place where the low lighting makes it difficult to read the bill it was just a wonderful consideration at the end.

On the way out I mentioned to the sommelier how much I enjoyed the wine he had suggested and he took the time to write down the name and year so I could buy some at home. What a great meal!

My one small complaint would only be the lack of bathrooms. I believe there was only a single one for the entire restaurant and bar. I had to wait about 15 minutes on our way out just to get in. But overall just a really pleasant experience with the family.
Allen and Delancey