Pizza from another State!!

March 16, 2008
Last weekend we got to experience a very special treat. Some non-NY pizza that was actually good! Have a look: 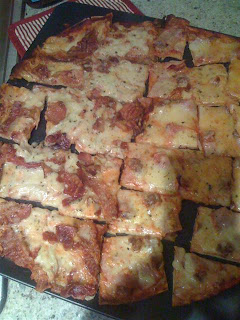 Where is this Pizza from you may ask? St. Louis! It’s from a place called Imo’s Pizza which is actually extremely popular out there. One of our friends is from St Louis and she decided to order some half baked pies and have them shipped up here for us to enjoy. How awesome is that. She actually used to work at Imo’s growing up so we had a true Imo’s experience.

We started the night off first with another St. Louis culinary delight. Some toasted ravioli’s. 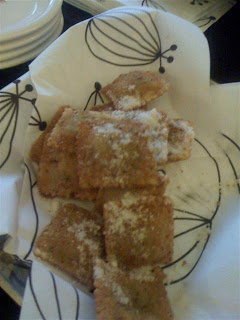 These beef filled raviolis were deep fried squares of deliciousness!! I found them to be a lot more satisfying for dipping in the marinara sauce than mozzarella sticks. They kept their crunch and while the inside was hot there was no tongue burning that usually accompanies my mozz stick eating. 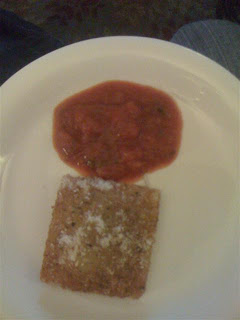 I had brought along a growler of the Southampton Black Lager from whole Foods bowery This is basically a German style schwarbeir that tasted malty and little bit like dark chocolate. It was really light and easy to drink. I would definitely buy this beer again. And isn't the growler kind of neat! 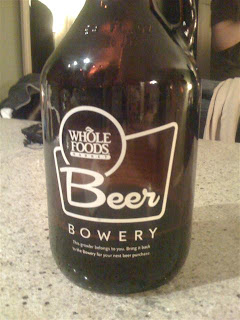 Once our hunger was quenched a little by our appetizers the pizzas were thrown in the oven.

So what makes these pizzas so different than nyc style? The cheese.

This is Provel cheese. It’s a processed white cheese that’s a mix of cheddar, swiss and provolone. Who doesn’t love processed cheese!


Now at Imo’s the pizzas are usually cooked in a pizza oven of some sort and come out nice and easy.

Here we threw them in a regular nyc apartment oven and hoped for the best.

Suddenly the entire apartment was filled with smoke! We had the windows open, fans on (it was freezing this night as well mind you) door open. We didn’t want to take the pizza out because it wasn’t done just yet. So we just stood there fanning the smoke away and coughing until finally the pizza was done. A little sacrifice goes a long way for good food.

The pizza came out and looked amazing:

I offered to help cut the pizza up since everyone was still kind of running around getting the smoke out. So of course this is what I did:

Luckily I only had time to cut up one of the pies before one of the St. Louisians saw what I was doing and stopped me.

See Imo’s pizza is always cut into squares! Me and my nyc pizza styling’s were all wrong. Luckily she took over and they came out looking more like this.

The pizza was awesome. The dough was really thin almost like a cracker and the Provel cheese has an awesome almost slightly sour taste to it that I loved. I actually put some non-melted Provel cheese on my salad and really liked it too. I may have to get some shipped up to me!

Now our other friend went to college in St Louis so he decided to recreate his glory college days by bringing over some cases of Natty Ice.

Well we got really back into the college days and started drinking that and playing cards. It was tons of fun until the next day.

Mr. T and I woke with horrible headaches and didn’t really move much for the first couple of hours.

Thank goodness I don’t have to party like I used to in college. My body can’t handle that anymore! So our Imo’s night was a huge success.

Those people from St Louis are pretty cool....even if they do talk funny :)
Imo's Pizza