June 27, 2016
I was having a serious craving for mussels last week so we walked over to Petite Abeille, a Belgium bar and restaurant in Stuyvesant Town.  Petite offers three different kinds of mussels; Mussels Marinieres with white wine & garlic, Mussels Basque with roasted peppers & chorizo and Mussel Grand Mere with cream & bacon.   Both Mr. T and I ordered our usual Marinieres but when our food arrived it was quite obvious they had brought us the Grand Mere instead. 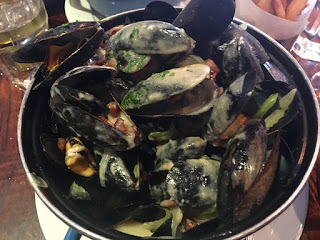 I figured this would be an easy thing to fix so I grabbed our waiter and proceeded to have this conversation:

Me- "I think we received the wrong dish we ordered the Mussels Marinieres."
Waiter- "Yes that's the Mussels Marinieres"
Me- "Ummm...But this has bacon inside"
Waiter- "All of the mussels have bacon or chorizo."
Me-  "But we ordered the white wine mussels"
Waiter- "All of the mussels have white wine"
Me- "But this one has cream inside as well" (pointing to the giant pile of cream covered shells)
Waiter- "That's not cream that's garlic." 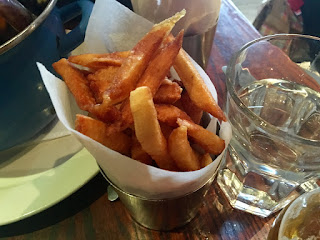 Well I was completely stumped after that interaction.  I looked across at Mr. T and he was just shaking his head.  There was obviously no way I was going to win this argument so we both just ate our mussels in creamy bacon beer sauce.  They were damn tasty in all honestly just not exactly what we had planned on eating. 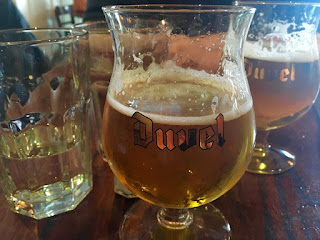 Along with the surprise of creamy bacon mussels all Belgian beers were half price as a Monday night special so that made everything a little better.