June 03, 2014
Friday we got up bright and early and took a cab over to Sparta Hallen for the Copenhagen Beer Celebration.  This festival is the brain child of Mikkel Borg Bjergsø of Mikkeller brewing who has organized it since 2010.  Forty brewer's were in attendance from around the world, offering two different beers at each four hour session over the course of two days.  We had tickets to three of the four and let me tell you it was easily the best beer festival any of us have attended.  Besides some serious problems with purchasing the actual tickets months ago (which was the ticketing site Billetlugen's fault) the event was pretty flawless. 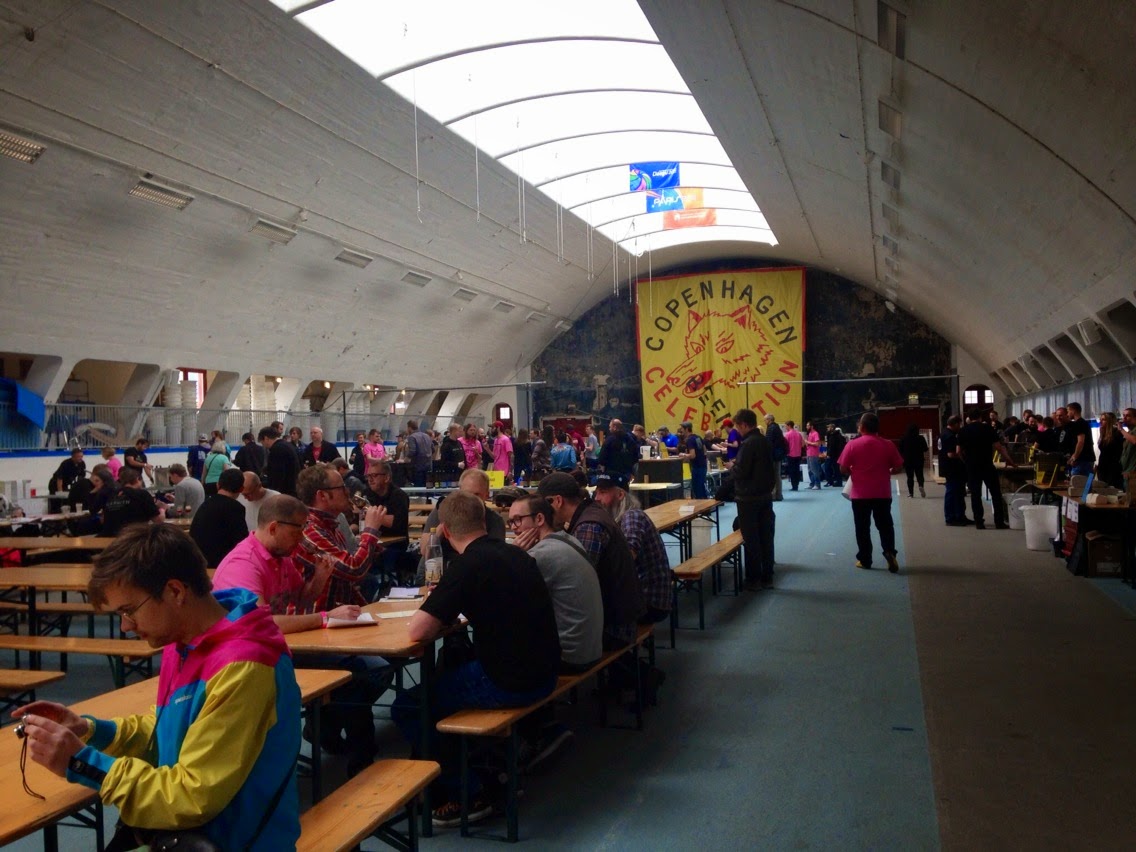 We showed up right around 9:30 and got in the small line that had formed outside for the 10:00 AM start.  After a quick check of our tickets we were handed our glasses and walked inside to begin the next 8 hours of beer tasting.

The event had been sold out for months, but tickets were so limited that there was never more than a 3 minute wait for beer.  The first session had an absolutely incredible lineup including Three Floyds Vanilla Bean Dark Lord, Cigar City Double Barrel Hunahpu and Boneyard Hop Venom.  I'd have to say it was probably the best beer morning of my life.  Plus the brewers were actually pouring the beer so you could chat with them a bit about their craft.  Glass rinsing stations were scattered throughout the room... an extra nice touch for cleaning out some of those big sticky stouts. 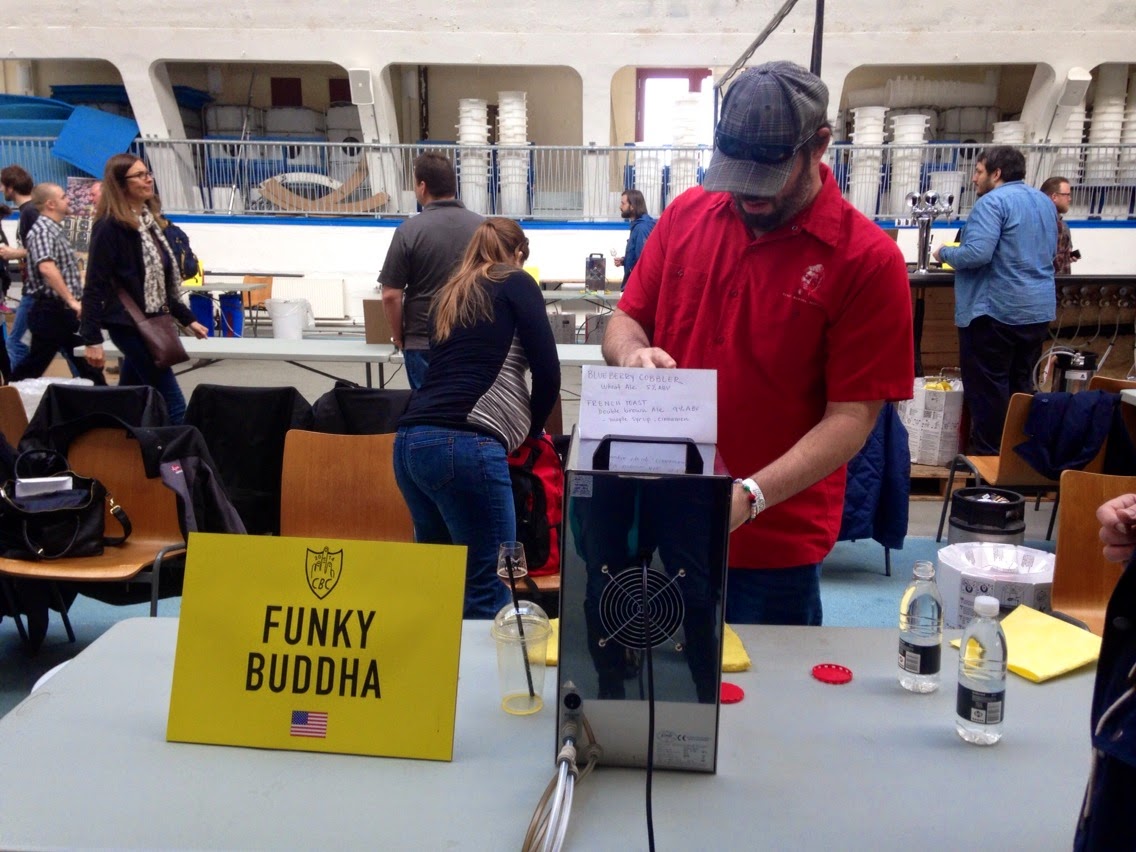 If I had to choose a favorite brewery of the event it would be little old Funky Buddha from Oakland Park, Florida.  When this place says they're pouring a French Toast beer it really tastes and smells like French Toast.  Ditto for the Bonita Applebum (apple pie beer) and of course the crazy delicious Last Snow made with white chocolate, caramel and coffee which was just so silly good I went back for thirds.


There were lots of beers I've had before like the amazing Firestone Walker Parabola and the always wonderful Jester King Boxers Revenge; plus a lot of new favorites like the Circus of Sour from Magic Rock Brewing.  This berliner weisse was part fermented in brett then aged for 6 months in chardonnay barrels making a crazy combination of round, salty and sour.  The Omnipollo Hypnopompa was also a surprise treat...kind of like a big boozy toffee bomb with burnt marshmallow on the end. The Beer Geek Breakfast Pooh Coffee edition, DDT (Double Barrel Whiskey) by Cycle and Mikkeller's Spontantriple Blueberry were also favorites...so many great beers in one amazing spot. 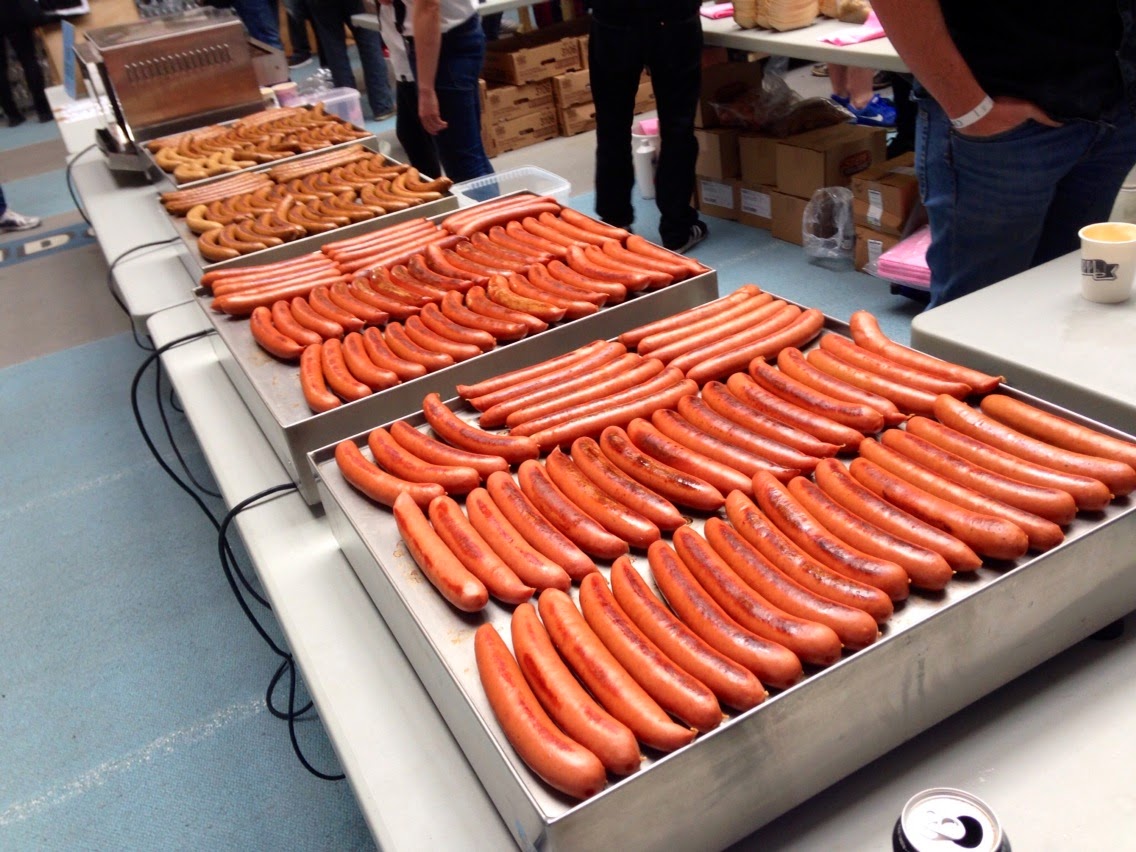 Oh and there was food on hand too...lots of it!  John's Hot Dog Deli was there with a few special creations for the event. 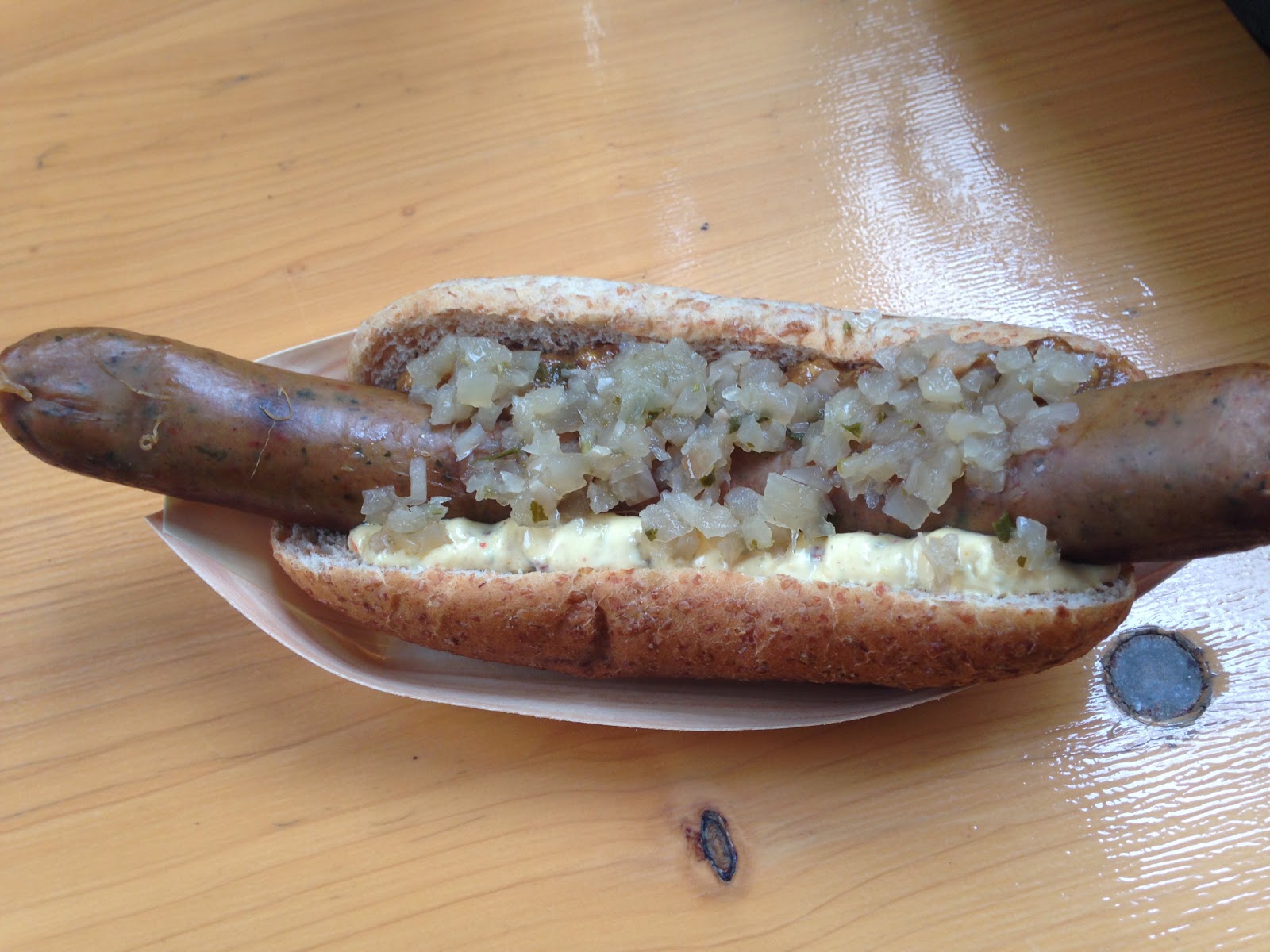 This one was called the Three Floyd's Dog with Chili Remoulade and Dark Lord sauce. 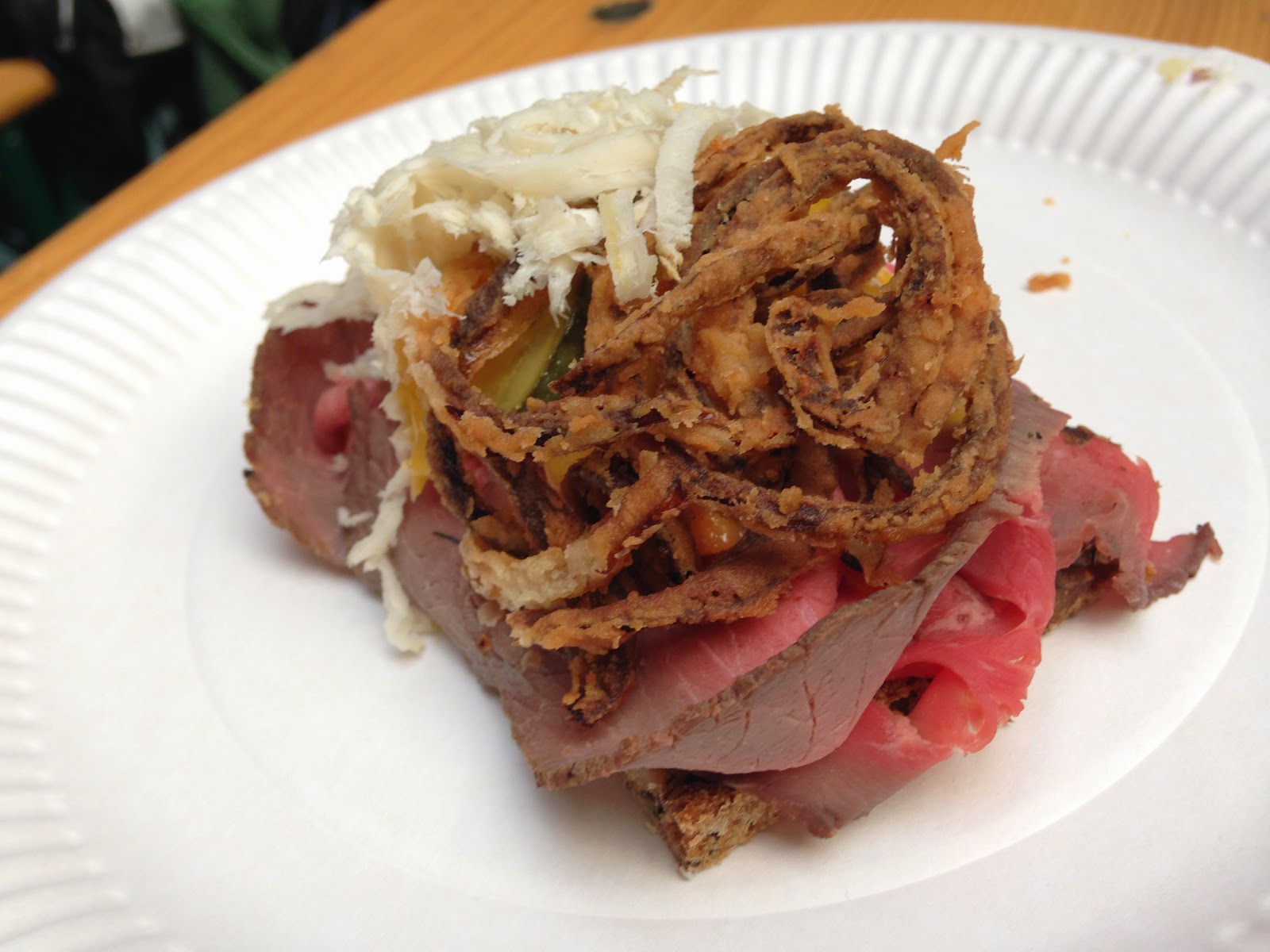 There was also classic Smorgasbord like this Roast Beef with crispy fried onions and even a little place serving Danish Cheese just perfect for pairing with the beer. 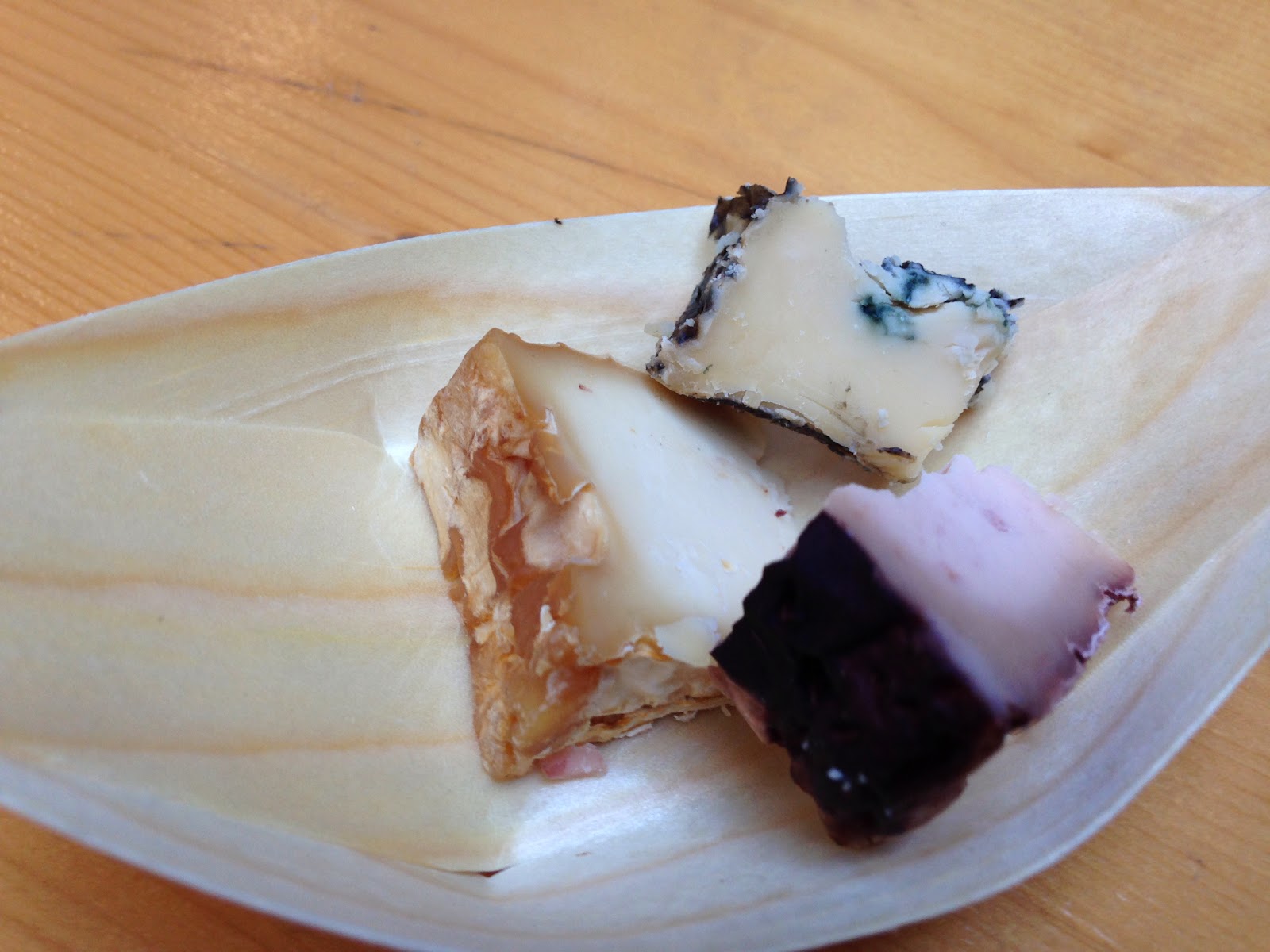 Between sessions we found a nearby park and did a little bottle share with some new friends from Norway. There was something perfect about chilling out in the sun that day.

We did three sessions total and each one had something a little more unique than the one before.  Saturday morning the guys from To Øl took a hangover day and left a bottle dispensing machine in their place...quite a fantastic idea if you ask me. 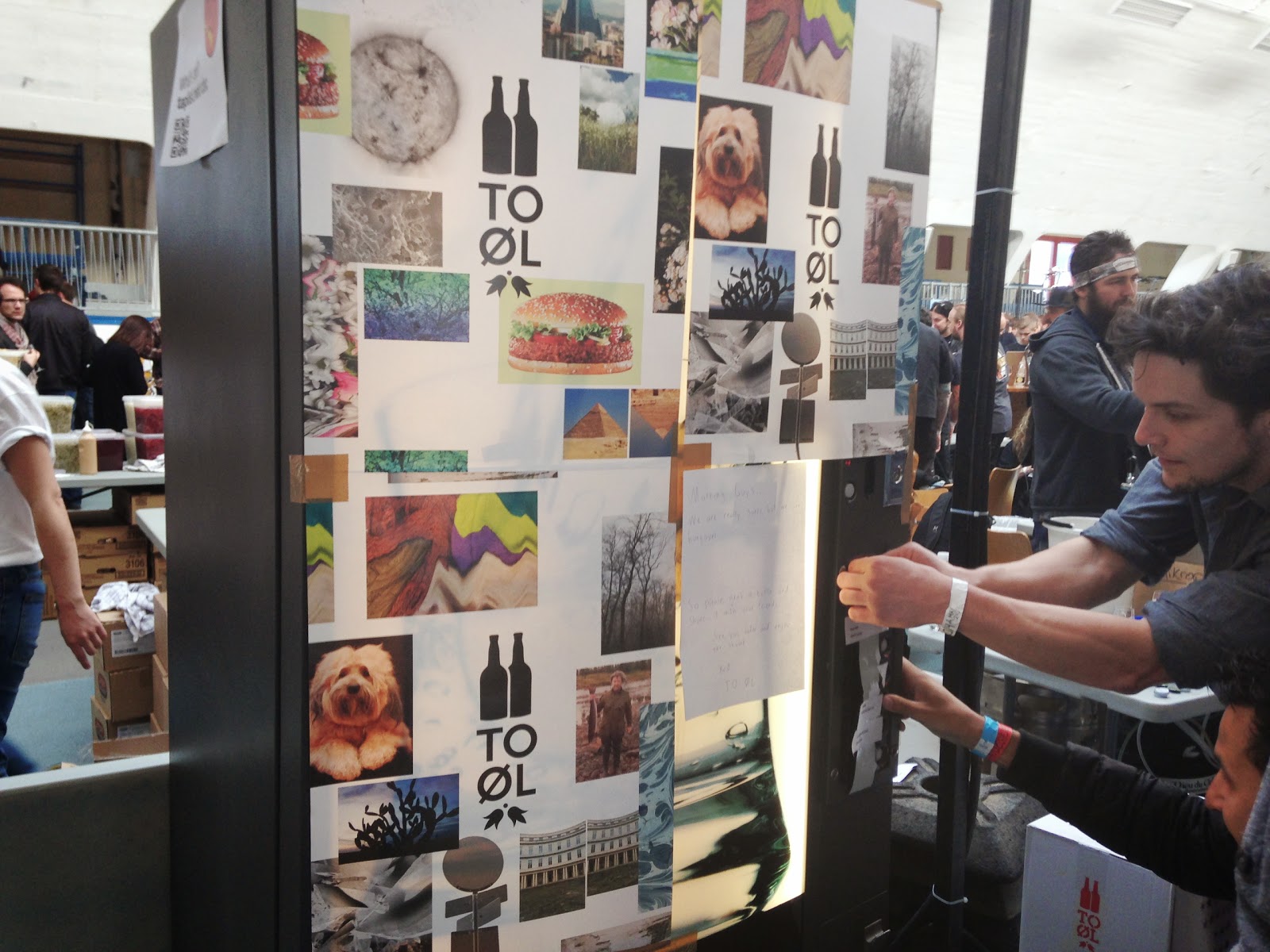 The Prairie guys seemed to be feeling the same way and spent most of the morning drawing some awesome cartoons of the event. 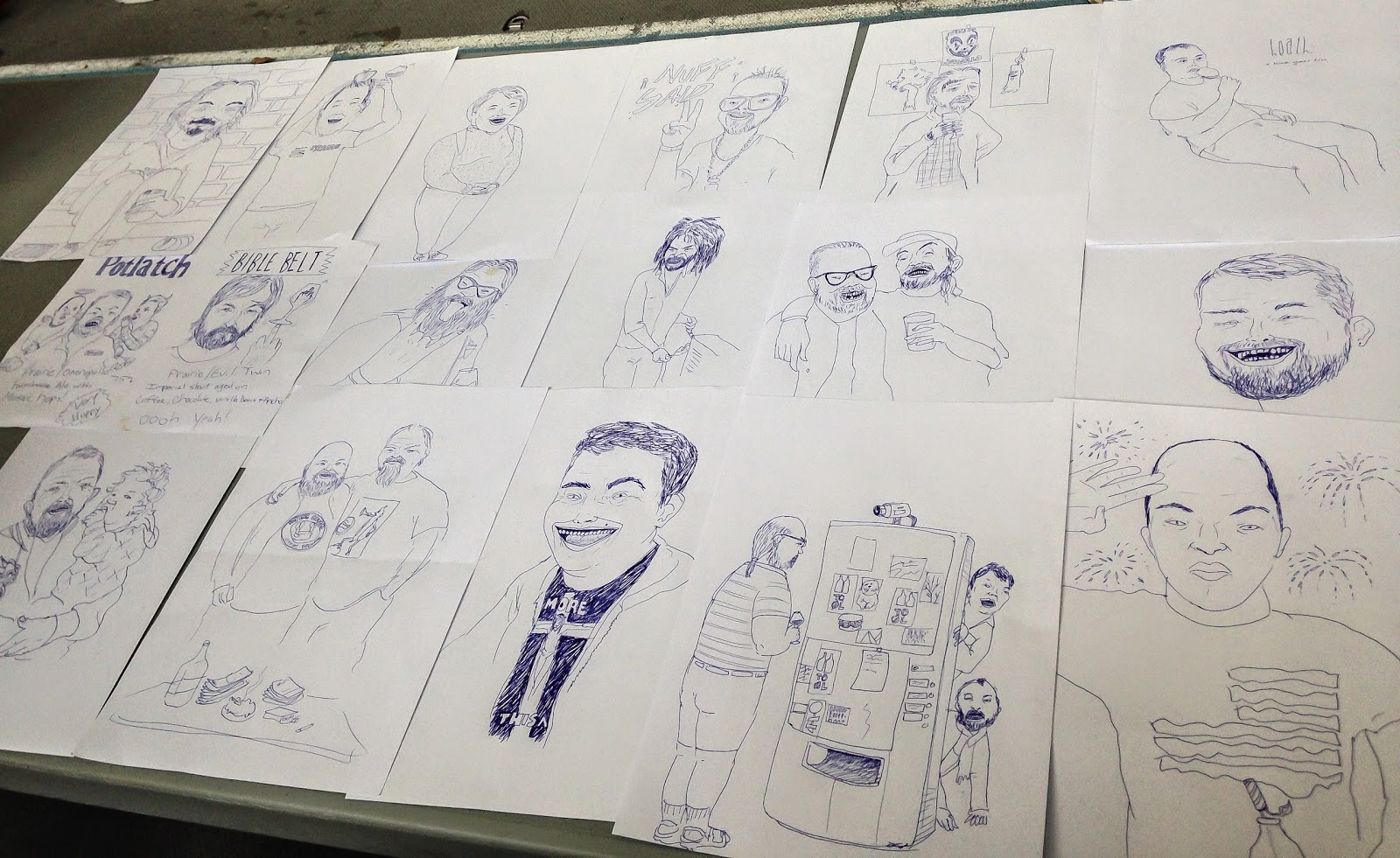 Besides offering some amazing food the festival had Coffee Collective offering drinks both days. 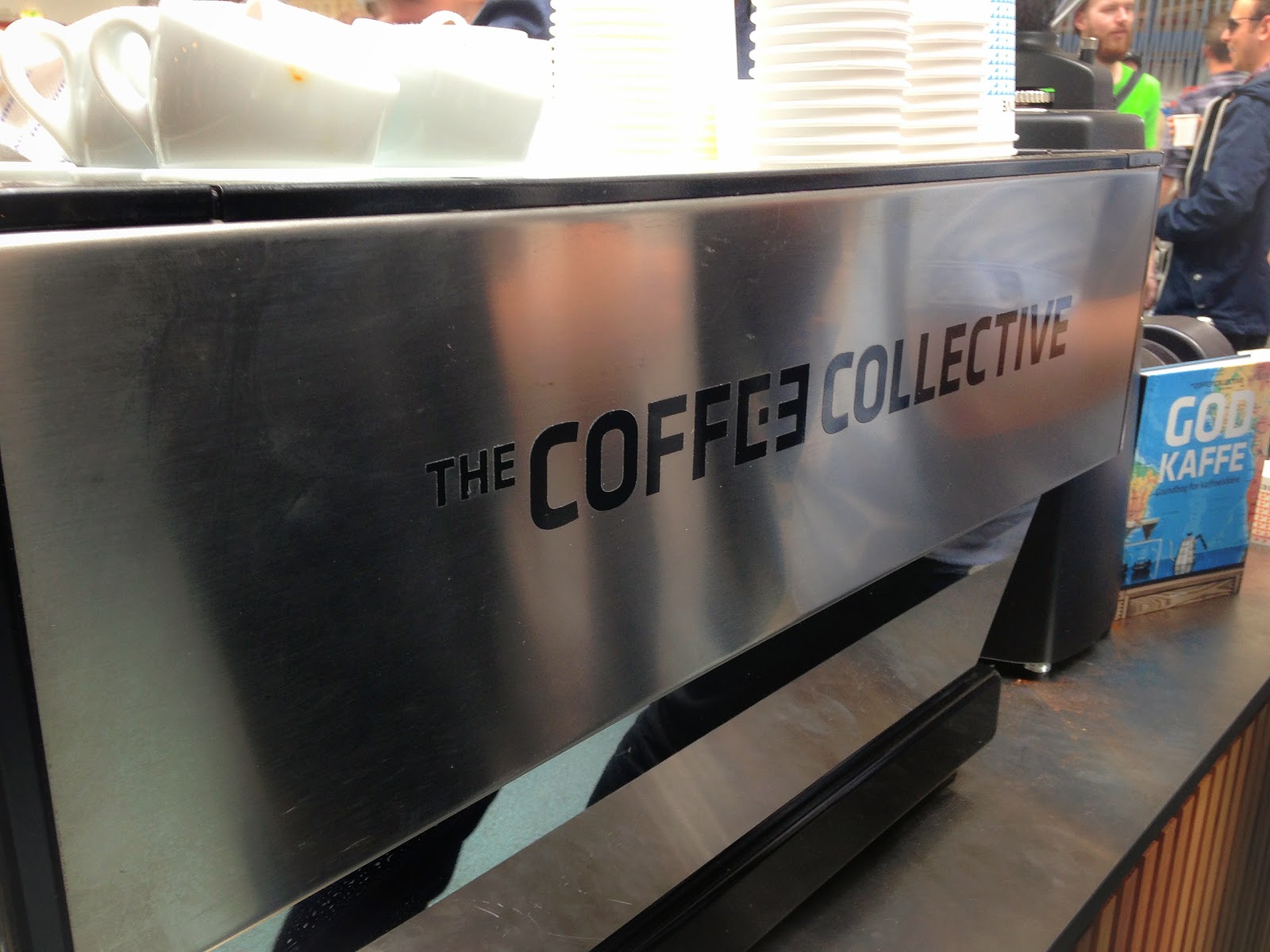 Espresso during a beer festival = life saving.  Seriously these guys really thought of everything. 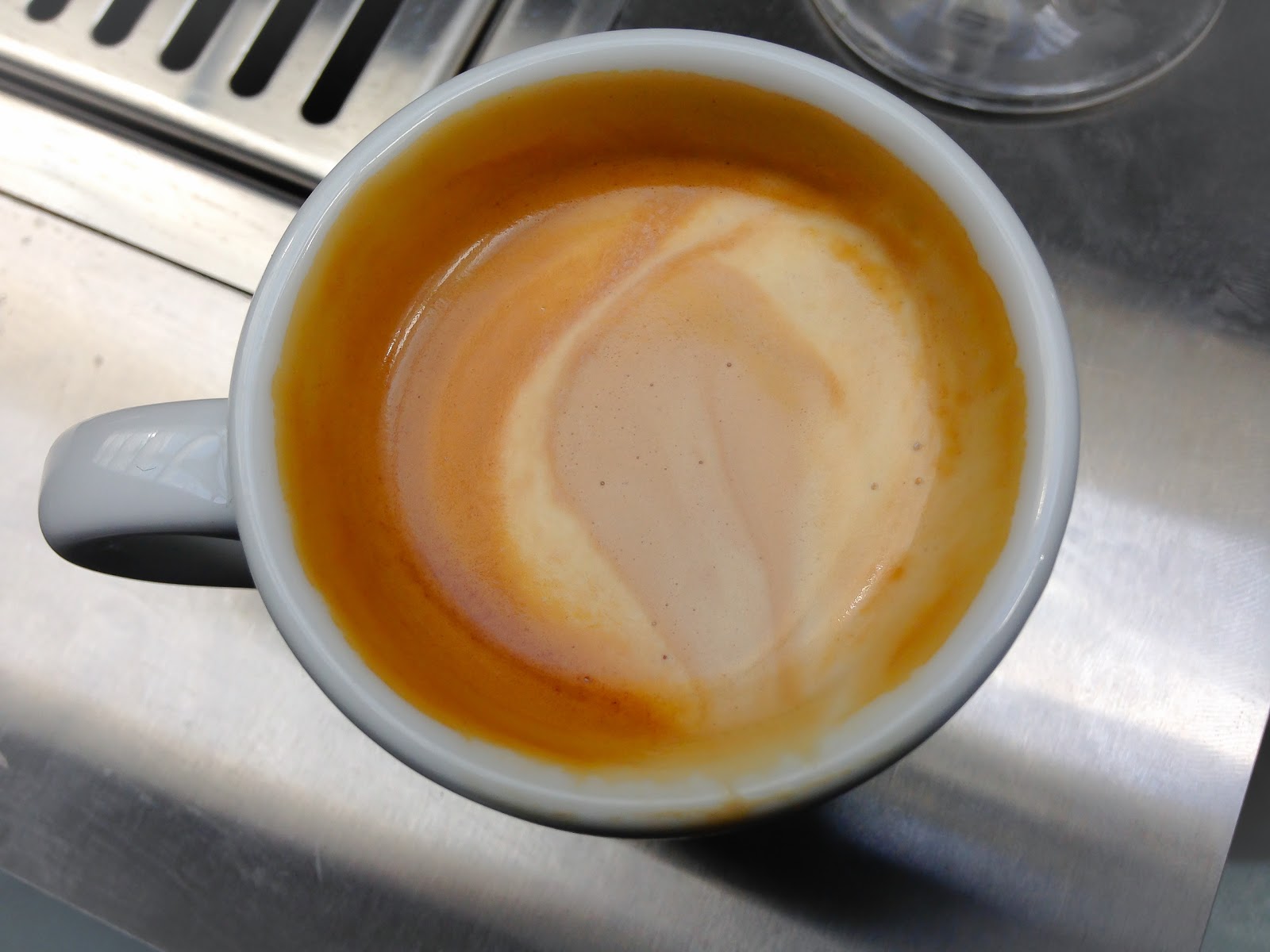 Overall it was just an absolutely amazing event.   We drank well, ate well and meet some incredible people. 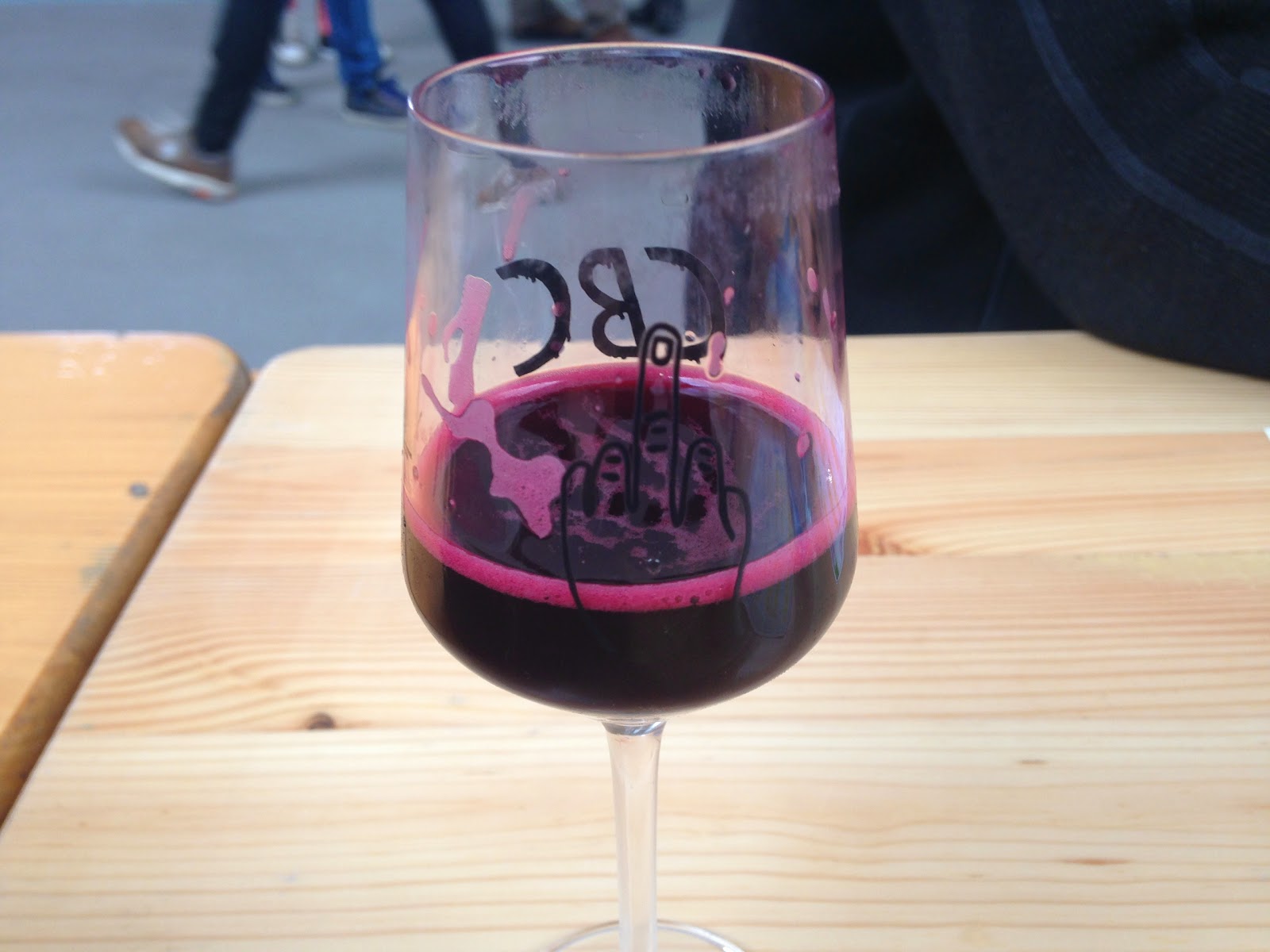