June 14, 2009
Sunday was the last day my friends from Vegas were in town. Their flight didn’t leave until 9:30 that night so we decided to pack in a few more things before they left.

There were two things they wanted to do Central Park and Brooklyn.

So we got up early and had a nice brunch right near the Alice in Wonderland Statue.

I had grabbed a bed sheet from the closet for us to sit on not realizing it was one of the fitted ones.

What a classic me kind of move. We all had to sit in the corners and not move so there was enough room and the sheet wouldn’t snap back.

But it was lovely nonetheless.

Then we grabbed their luggage and hopped on a train over to Park Slope.

They had a friend who wanted to show them around his neighborhood (which basically means going to a bunch of bars).

So we had some drinks outside at Cherry Tree and 4th Avenue Bar (Good Beer Selection at both) and then headed over to Alchemy to have one last meal all together before they got their flight.

I was really surprised how packed Alchemy was for an early Sunday evening. We got the last big table out back available.

For appetizers we decided to split a couple orders of the BBQ’d Spare Ribs. 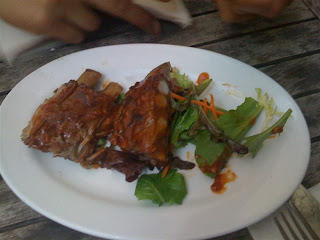 These were a little disappointing. The ribs didn’t have much meat on them and the sauce was a little too sticky sweet for my taste.

I think we may just have had a bad showing because the entrees that came out next were fantastic!

This is the Alchemy Burger. 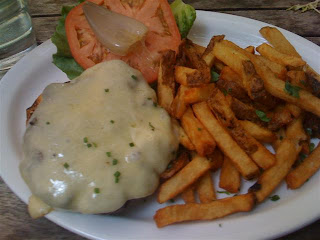 Yum!!! I knew I had to order his when I saw the cheese toppings for the burger.

Havarti!! I love that cheese and have never ever seen it on a burger before.

It was delicious. A nice thick slab of Angus Beef topped with a delicious shallot confit and terribly addicting crispy fries on the side.

The burger was slightly overcooked and it was a brioche bun which I never like but I still really enjoyed this burger.

It had so much flavor going on between the shallots, cheese and onion bun.

I would return for this burger in a heart beat.

Mr. T went for the Fish and Chips. 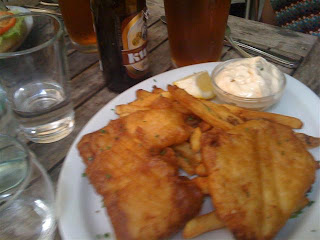 Fish and chips can be very hit or miss and these ones definitely hit!

The fish was perfectly crispy on all sides but the batter was light enough to really taste big chunks of moist cod.

The best part about the dish was the tarter sauce.

OMG it was so good I just kept dipping my fries in it.

I couldn’t tell what was inside, maybe some rosemary, but it was house made and delicious.

We ended our night at Alchemy with a couple send off beers and said goodbye.

Mr. T and I ambled our way back to Manhattan, exhausted but happy.

We had a great weekend filled with old friends, new friends and a ton of good food in between. What more can you ask for.
Alchemy Brooklyn