June 11, 2009
We had friends visiting last week from Vegas and spent quite a good amount of time eating and drinking our way around the city.

We had some awesome Roast Pork and Congee take out from Big Wong, some slices in the sun at Artichoke and of course some hot dogs at Gray’s Papaya.

All that stuff is great but we hadn’t really sat down anywhere to just eat. So on Saturday morning we decided to wake up and get a proper brunch.

I was craving some grits so we headed down to Acme where they promptly started us off with a nice big basket of Corn Bread. 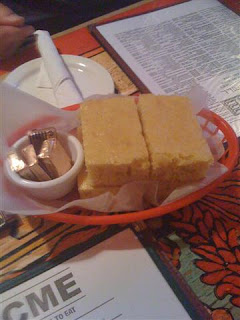 It was nice and fluffy and served piping hot so the butter melted immediately upon contact.

We all decided to order directly from the Brunch Pre-Fix which involves a free drink of some sort. 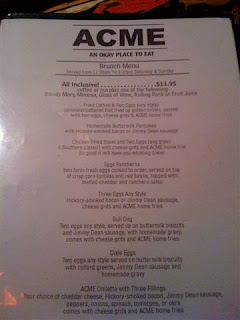 I went with my usual Pineapple Mimosa, Mt. T got a Rolling Rock and my friend Chris got one of the spiciest Bloody Marys I have ever tasted.

It was damn good. I mean serious sinus clearing good.

It was a pretty stupid comment because there were hundreds of hot sauce bottles lining the walls around us. I think they’ll have hot sauce.

For my main dish I got the Three Eggs Scrambled with Bacon, Hash Browns and Grits. 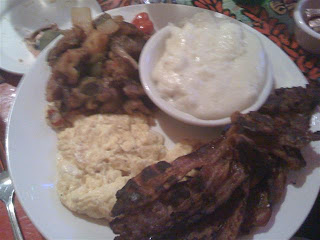 Wow- that is a TON of food!

There was enough bacon on my plate for the whole table to enjoy!

And talk about the bacon- It had been cooked until each piece had a nice crispy char on the outside and no visible gloppy fat.

The hash browns were spicy and the eggs had a nice taste although they could have been a little bit fluffier.

Our waiter brought over some Peninsula Gold Caribbean Pepper Sauce for the eggs.

It just kind of kicked the flavor up a notch. Not something I would usually put on my eggs but interesting.

The rest of the group got the Fried Catfish and Eggs and the Pancake Sausage Platter.

Everyone loved their meals and we were stuffed beyond belief at the end.

Another reason I really like Acme is the service.

Our waiter had the driest sense of humor that I just couldn’t get enough of. He was awesome.

Acme continues to be a chill place to hang out, have some drinks and a ton of food.

It’s not going to blow your mind, or lead you to some culinary epiphany.

It is what it is. Their slogan “An Okay Place to Eat.”