June 02, 2009
After a beautiful Saturday spent walking around aimlessly I met up with some friends for dinner and drinks in Midtown at the Perfect Pint.

We chose the Perfect Pint because they have a rooftop on the third floor with tables and TV’s for viewing the various games.

When we got there the place was packed but luckily we scored a table after only a few minutes.

We decided to order a couple appetizers to share.

Our first dish was the Spinach and Artichoke Dip. 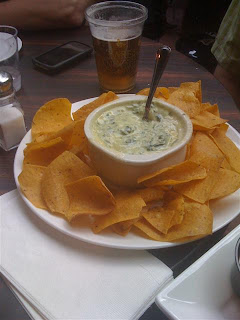 The dip had a nice flavor but the texture was a little bit watery. I prefer a dense creamy dip and this was kind of thin.

I didn’t really care for the chips either because they had obviously been fried twice.

I hate when they do that. Tortilla chips only need a dip once and then a dusting of salt.

Our other appetizer was the Chicken Fingers. 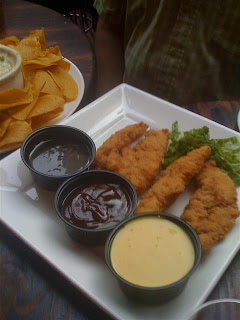 These fared much better than the dip I thought.

There was just the right amount of breading and lots of juicy white meat underneath.

It came with BBQ, Honey Mustard and some kind of Asian flavored dipping sauces that were all pretty good.

We also ordered a Steak Quesadilla and man was it spicy!!! 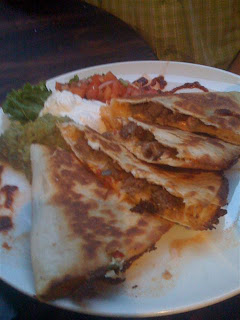 They must have marinated the Steak in something before they put it on the grill and it really didn’t taste very good.

It’s a shame too since it could have been a really great quesadilla otherwise with all of the toppings they put on top.

Overall the Perfect Pint disappointed me food wise. The prices were higher than your average pub so I expected the food to be better.

However watching playoff basketball outside is quite a luxury in the city.

And they do have some of the coolest bathrooms I’ve ever seen. 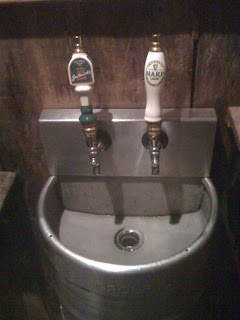 Look at this sink! Isn’t that cool! It looks like a keg and taps!

I’m sure I’ll be back for some drinks but maybe stop off for some food elsewhere.
The Perfect Pint