June 22, 2009
After some shopping in the East Village Tuesday night we headed over to our old standby yakitori joint Yakitori Taisho for dinner.

We got there about 5:55 and the women inside told us they weren’t open yet but that next door was available.

Next door? We had no clue what she was talking about.

We walked to the left and saw a similar looking joint called Oh! Taisho. This seems to be some sort of spin off of the original.

For the purposes of comparison I will call the spin off “Oh!” and the regular “Taisho” during this post.

We decided to check it out and ordered our usual Taisho dishes to see how it compared.

First up the Tuna Carpaccio. 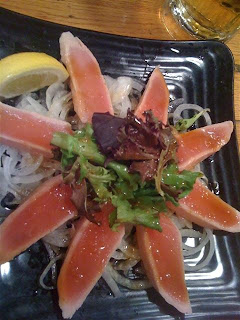 This came out looking a little different than Taisho. The tuna was in bigger chunks and there was a lot less lettuce.

The tuna was definitely thicker than normal but still had the same salty sauce on top and the same mayonnaise on the side.

I really enjoy having lettuce with my tuna to cut the salty taste a bit and would have enjoyed some more on the dish.

Next was our Chicken Meatball Skewer and Quail wrapped in Bacon. 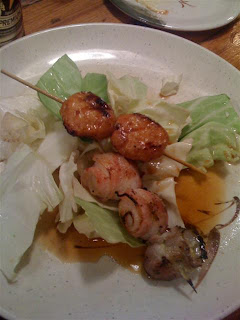 Okay the Quail wrapped in Bacon was awesome!!!

It was like having a mini breakfast on a stick! Why hadn’t I ever tried one of these before!

We also got some Chicken and Beef yakitori. 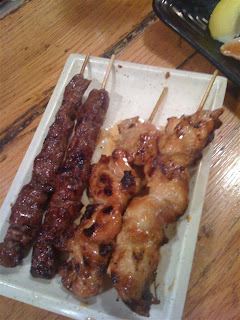 The chicken had a very nice char but seemed to be lacking a little bit in the flavor department.

We finished our meal with the grilled squid which was exactly like we had before next door at Taisho. 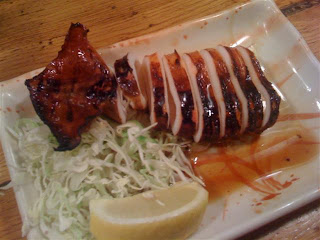 So overall our meal was good but it just seemed to be lacking the extreme flavor we usually get at Taisho.

Mr. T thinks they didn’t put as much sauce on the meat as they usually do.

I have no idea. I still found it to be good food at a cheap price.

The one thing I did see being ordered here a lot were the Mentai fries.

Man those looked good!! I am putting that on the list for next time for sure.

We will be sticking with the original Taisho but Oh! is a good alternative if you don’t want to stand in the insane lines that form outside for Taisho.
Oh Taisho