May 27, 2009
Saturday turned into a beautiful day so Mr. T and I did some wandering around of eating and drinking.

First stop was The Rusty Knot for some beer and their Pretzel Hot Dog. 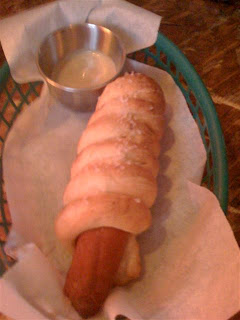 For some reason I thought the Pretzel would be baked on the Hot Dog more, fully encasing it.

Here the Pretzel was twisted around. It was pretty good but not as good as it sounded at first.

Two thumbs up however for having Busch Beer on tap! That brought me back to my High School days! Lol!

Then we headed over to The White Horse Tavern to watch the Yankee game and drink some more beers.

The White Horse is most famously known for being the place Dylan Thomas drank himself to death.

The White Horse is famous in my book for having solid pub food at rock bottom prices.

The burger was delicious. 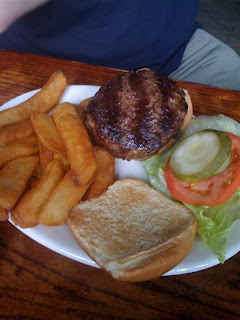 It was quite a sizable piece of meat with a nice char on the outside and a toasted bun. It came more well than medium rare but it still had a nice juicy inside and lots of flavor (although I would have preferred that red middle).

The fries are thick cut which I usually don’t like but these were pretty good.

Usually steak fries are too limp but these fires were nice and crispy with just the right amount of salt.

After a couple beers we stopped for a drink at Greenwich Tree House (great view for people watching), some vino at 8th Street Wine Cellar and then found ourselves at the new Union Square spot Lillie’s.

Lillie’s bills itself as an Irish Victorian bar and has an awesome charm about it.

I loved the architecture, the big windows in front and most importantly the diverse beer list.

I also love me a nice sampler platter!

I ordered one with Chicken Satay, Mozzarella Sticks and Chicken Wings. 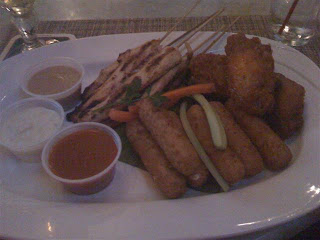 At this point all of the beers have clouded my judgment a tad but I have to say it was a really good platter.

They gave us tons of food- at least 7 Mozzarella Sticks! And all of it was tasty.

After Lille’s we headed home, full and tired.

It was so nice being able to just relax and have a lazy Saturday. We really needed it.