May 19, 2009
My friends were in town last weekend for a special bachelorette weekend. After hitting up the Yankee game Friday night we awoke Saturday morning in need of a solid brunch.

I wanted to try something new so we headed over to Kellari Parea, a Greek Bistro near my apartment.

We got there right at noon and were the first ones there. Not even the jazz band had set up yet.

We sat up front near the nice big windows that let the sunlight stream though. 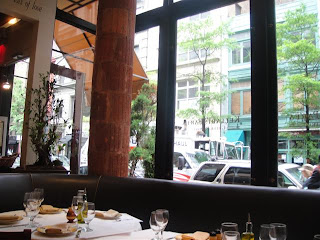 Each breakfast came with a drink so we got a Mimosa, Bloody Mary and glass of Champagne. 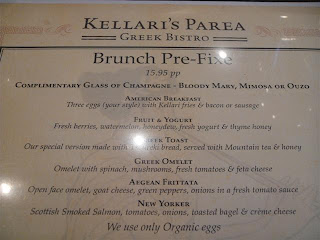 I was psyched. I was loving the atmosphere, the drinks, everything. This place had the potential to be awesome I thought.

And it could have been! If it wasn’t for a few big problems. But I’ll get to that.

After we ordered they brought out some bread and a little plate filled with olives, radishes and hummus. 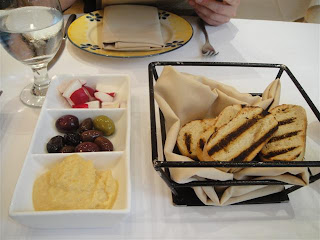 The hummus was pretty good but a little bit too garlicky for a morning start.

Then our entrees arrived.

My friend and I both ordered the American breakfast, which was a platter of eggs, bacon and greek fries. 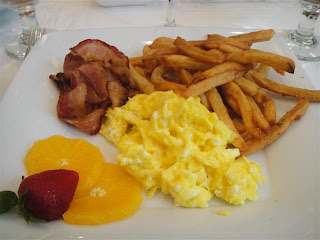 OMG the eggs were so good! I’m not sure what they did to them but they were some of the best eggs I have ever had. Light, fluffy and buttery mounds of goodness!

And the fries! Don’t get me started! They had just the right amount of crispiness and were shaken with a perfect blend of spices.

So where did the problems begin? Well here is my friend’s dish the New Yorker.

Hmm..let’s see a big scoop of cream cheese, some beautifully presented salmon and what else…something is missing. 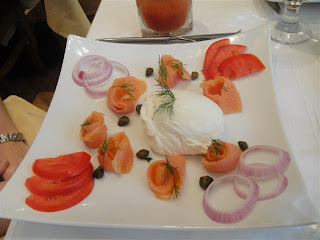 Where’s the bagel? The most integral part of the dish?

We figured it had to be coming so we all just kind of sat there waiting to dig into our meals for about 5 minutes.

Finally our waiter noticed something was wrong and came running up and explained that the kitchen was out of bagels. And would she like some pita bread instead?

Okay now I have a couple issues with this.

First- whenever a main component of a dish is missing the customer should be informed before so they would have an opportunity to change their order if needed. That didn’t happen.

Second- while pita bread was a nice offer they apparently didn’t have any of that made either! When she said she would like some our waiter came back almost 20 minutes later with a basket. By that time we had almost completely finished our meals and had no use for it.

Third- come on people this is NYC! There are bagels to be had on every corner! Why not just run to the corner deli and grab a couple? No one was in the restaurant, the matre’d had been just walking around aimlessly the entire time we were there. WTF?

So service became quite an issue.

Our waiter also never offered us another drink. We had waited so long for our entrees to begin with we had finished our cocktails. The waiter never once came to see if we wanted another one which is silly because we would drank another round which we would have paid for.

Apparently the waiter was banking on the cash from our water I came to find out.

When we sat down he had asked if we wanted still or sparkling. I answered by saying still without really thinking about it but there it was on the bill- $6 for a bottle of water.

What a rip-off. I thought those hoodwinking water bottle days were over.

So I was really disappointed in Kellari. The food and atmosphere were so wonderful! But those service issues really made it frustrating.

It makes me wonder how they would do if they actually had a full house for brunch?