November 11, 2008
It's starting to get chilly once again on Tuesday so we decided to go out and get a big bowl of some RAMEN!!!

Ippudo is a new place that opened this summer near St. Marks place. It's always very crowded whenever I walk by so I was a little nervous we would have a long wait.

We decided to go early and at about 5:30 we walked inside and got a seat right away.

Ippudo has a nice airy but sleek interior. It was a lot more spacious from the inside than I had imagined.

We looked at the menu and realized we both wanted to order the same exact things we had at Momofuku the week before!

Because of that, we ended up comparing each thing with Momofuku. It's kind of impossible not to when something is so fresh in your mind.

Anyway, we decided to start with some steamed pork buns. 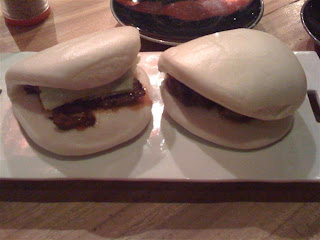 The two buns came out looking a little bigger than Momofuku's but quite similar in style.

The pork inside was thinly sliced and came topped with lettuce and mayonnaise.

I thought the mayonnaise took away from the taste of the pork a little and the bun to pork ratio was a little off. This bun was a little too big for the amount of pork inside.

This one goes to Momofuku BUT I do think these come in a close second. I think Momofuku has the best pork buns ever but I could also chow down on Ippudos all day long if I had to. The flavor of the pork was nice and it was a little less fatty than Momofuku's.

Next up were the chicken wings. 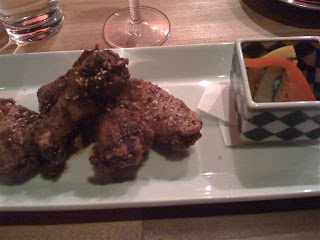 The wings were a decent size and had a great snappy exterior. They were covered in a black pepper sauce that really had some bite to it.

Man that stuff can sneak up on you!

After my second one I was chugging water like a mad man!

The wings were very good but I am still in love with Momofuku's. While I enjoy a black pepper sauce I like my wings to have more of a tangy flavor to them.

Bonus points though to Ippudo for the little side of pickled veggies that were fantastic!

Okay, now for the main event...The reason for coming to Ippudo in the first place. The Ramen! 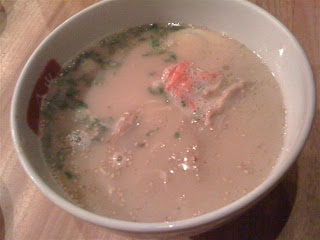 Okay, although this picture isn't the prettiest one in the world, you have to believe me that this ramen was amazing!!

This is the Pork Ramen Classic - Shiomaru Moto Sji. Which is basically ramen noodles, pork, berkshire pork chashu, cabbage and scallions all in a big bowl of soup.

I don't know how to describe how good this was. The broth was thicker than Momofuku's and somehow the pork flavor seemed to have been completely infused throughout the soup making each bite just heavenly.

The noodles and pork slices were both thinner than Momofuku's but the flavor was still spot on.

There's something about a digging into a big steaming bowl of ramen on a cold night.

It was almost like getting a hug from my Mom- warm and comforting.

I thought Momofuku's ramen was good but this one was fantastic!

So overall our meal was very good and I forsee many cold winter nights spent slurping up some soup in this dining room.

The only small problem I had with Ippudo was the service. Although it was attentive, I felt very rushed the entire time.

When we were walking out I saw that there was a line of about 15 people waiting so I guess they really want you to get in and get out fast.

So if you want to go out for a leisurely meal, this isn't the place for you.

But for some delicious ramen that will leave you feeling like all is right and good with the world, step right up!