June 21, 2008
Mr T completely surprised me the other day by making dinner reservations at Market table for Friday! He's surprised me with dinners before (okay only once before) but this was special. I had tried to go to Market Table a bunch of times and something always came up to prevent it from happening. So I was absolutely thrilled when he told me the news and I decided not to leave him after all :)

We got to Market Table around 6:30 on Friday night and the place was relatively empty.

First of all, I love the space!! High wooden ceilings made the space open and airy while the big windows bring in the sunlight and look right out onto the street corner for optimal people watching time.

The wind had started to pick up as we were walking in and we hoped to see a rainstorm while we ate, but unfortunately that never happened.

We were seated in the middle of the room at a big wooden butcher block table. We ordered a bottle of wine and listened to the specials of the day.

I was excited because they were offering the burger as a special that night. I am on a perpetual quest for the best burger so I knew I had to order it. But first we started out by splitting an appetizer. 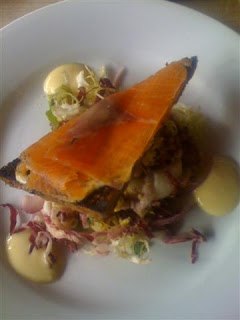 This is the house cured salmon gravlax on pumpernickel with frisee and egg salad.

They brought the dish out already split up on two plates. This is such a simple thing to do but it really makes the meal more enjoyable.

I actually can't eat salmon so Mr. T took my piece but the egg salad and frisee were wonderful! It came with a mustard sauce on the side that gave a little spicy kick to the creamy egg salad.

Mr T loved the salmon as well. I just thought the pumpernickel, egg and mustard together were a great flavor combination.

As one of the specials they had Beau Soleil Oysters from Nova Scotia, so I got one of those. 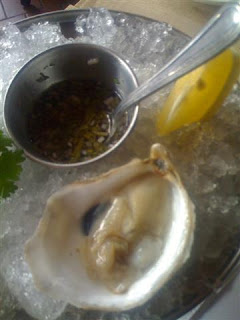 The oyster came with some kind of spicy chili sauce which I didn't use since the oyster itself was so perfect all it needed was a splash of lemon.

For our mains the burger arrived and it didn't look as impressive at first as I had expected. 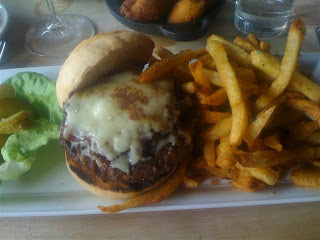 Then I realized what was missing. The tomatoes!!!

They had stopped serving them because of the salmonella scare! That made sense. The waiter offered to bring some out if I wanted but I declined. The tomatoes never make the burger for me anyway.

The burger came topped with caramelized onions and a thick white cheddar cheese.

It just didn't have anything distinguishing about it. The toasty Cheddar cheese was excellent but I hardly tasted the onions. It wasn't until about half way through the burger that I remembered they were there.

The bun was nice and soft but lacked the squishiness factor of a potato roll.

I was just expecting something a little bit more. The charred outside of a Shack burger, the buttery flavor of the Seymour Burton meat, the addicting saltiness of a PJ Clark patty...there was nothing like that.

It was simply a very good burger that lacked that extra oomph! to make it memorable.

What were memorable though were the fries! OMG they may be my favorite in the city! Every single one was perfectly uniform with a crispy, salty outside that was so good they didn't even need ketchup!

The other excellent part of the night was Mr. T's whole roasted Branzino. 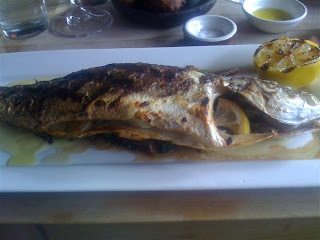 Wow!! The fish was incredibly moist with a slightly sweet flavor that was brought out by the whole pieces of garlic and lemon that were stuffed inside. It came atop a bed of sauteed bok choy that had soaked up the garlic and lemon juices flowing out of the fish. It was spectacular!!! We ate the entire thing!

As a side we ordered the hush puppies which came with honey butter sauce for dipping. 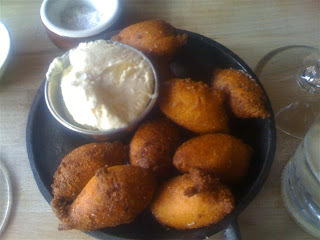 These were also very good but I was so busy enjoying my fries and stealing bites of Mr. T's fish that I couldn't really focus on sides!

We were so stuffed after the fish we couldn't even fathom doing a dessert so we just finished our wine and paid.

Overall I really liked my experience at Market Table. The space is beautiful,service was spot,the food was excellent and my wonderful man planned it all!

What more could a girl ask for!