June 30, 2008
I decided to trek out to Williamsburg Sunday morning to check out the Unfancy Food Show and see what it was all about. It was about 90 degrees and extremely humid around 12:00 and I thought the walk to the bar from the L train was going to kill me.

By the time I got to the place I was sweating profusely and looking for some good food and drink.

I was actually one of the first people there and the vendors were still setting up. I was surprised to see how small the event was but they really packed a lot of great stuff in the timy space.

There were so many great things there, especially the sea salt and almond chocolates from the Mast brothers, but I couldn't really pick anything up because I was afraid it would melt on the walk back.

The one thing I did decide to buy though was the ice cream.

I had a sample of the chocolate flavor upon walking in and the rest of the show I just kept thinking about it. So on my way out I stopped back and picked up a scoop for the road. 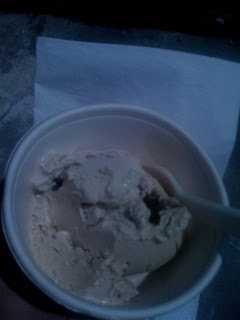 I already knew the chocolate was amazing from the sample so I decided to go for something new and asked for the pistachio.

Wow!!! One of the best ice creamsI have ever had. The pistachio had a great earthy nuttiness flavor and the itself was thick and rich without being overly sweet.

The ice cream came from Van Leeuwen Artian Ice Cream and I highly recommend checking it out. The people their were super friendly and you could tell they were serious about their gelato.

I actaully looked them up and found out they are the new artisan ice cream truch people in SOHO! Who knew!

Overall the entire event was very nice and I got to try a lot of good stuff. Hopefully next year it won't be so warm so I can actually purchase some stuff to bring home. But man, that ice cream really hit the spot.