June 11, 2008
Mr. T.’s sister and husband are moving to Florida in a couple of weeks, so they threw a going away party on Saturday night. They ordered a bunch of appetizers to snack on at the bar throughout the night and most people gobbled them right up.

Most people except for Mr. T. In his defense he was called out of the party for a work matter halfway through and then tried to play “catch up” when he got back by drinking a bunch of Duvel’s and forgoing the food all together.

We woke up Sunday morning and needless to say he was a little worse for wear and starving! I went through a list of foods I could go grab but there was only one thing he wanted- dim sum. Nothing else would do.

I took a look at the temperature outside and saw it was around 95 degrees. No way in hell were we going to schlep all the way down to Chinatown in this heat! Then I remembered seeing that Wakiya did a weekend dim sum brunch. We looked it up on their website and decided, although a bit pricier than we wanted, the two block walk was about all we could handle that day, so we headed out.

Wakiya is the Chinese restaurant that opened to a mixed bag of reviews last year inside the Gramercy Park Hotel. People had high hopes for the place but the early reviews slammed it for small, overpriced food. I hadn’t heard about it in a while but it hadn’t closed down either.

I took that to mean it had improved.

We walked in right about 1:00 and the place was empty besides one group of four and a solo woman dining. We were seated immediately at a huge wooden table that looked out onto the park.

The space was a little strange in the sunlight, but I could tell with the lights on low it would be very sleek and stylish.

We took a look at the menus and decided to order 4 dishes to split between us. They also offer a $35 prix fix but we thought that would be too much food and kind of a waste for the shape we were in.

The first dish we received was actually a last minute pick. We had asked for the Pork Bun but they were all out, so we subbed in with some spring rolls. 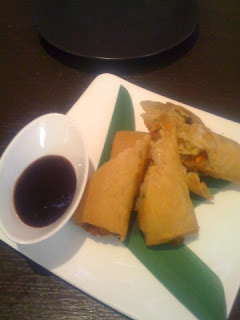 The spring rolls were surprisingly good. The last one I had was at Chinatown Brasserie and I hated the filling and thought they were small. 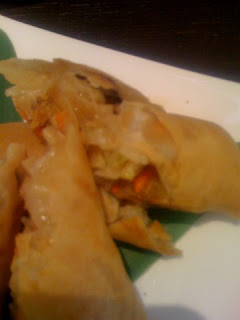 Here they were a pretty good size and came with a great dipping sauce. My only complaint was that they were a tad too greasy. I had to napkin off the bottom of the roll because I was a little grossed out.

Next came the Crab & Pork Soup Dumplings. This is really the main reason Mr. T loves dim sum so much. He is infatuated with soup dumplings. 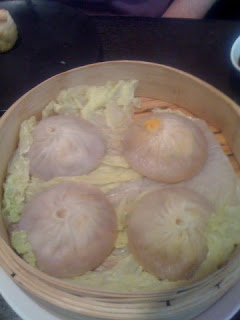 They looked nice and plump with a thin skin but unfortunately they just didn’t have a remarkable taste. The insides were somewhat bland compared to other ones we have had, and for $16 we could have gotten about 4 orders of great ones at Shanghai café instead. 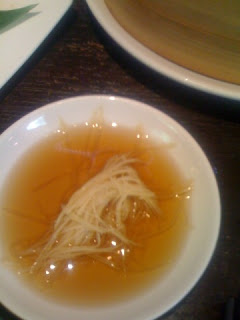 It came with Ginger Vinaigrette for dipping which added flavor to the dish but almost overpowered the Dumpling.

The next dish we got turned out to be our favorite. The Shrimp Shumai. 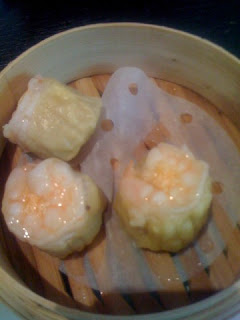 Shumai is a funny thing in the city. I feel like every place has a different take on what makes it. Here the shumai was exactly what it should be. A solid whole shrimp atop ground up pork with a great sauce.

Our last dish was the only one I had picked out- the Spicy Beef Salad with Yuzu dressing. 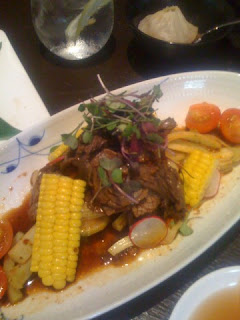 The presentation was gorgeous but as soon as she placed the dish down I realized what was missing- the salad.

Okay...I know that the term salad is a very loose term these days. I actually looked it up on wikipedia to see how they defined it. They said it is a “mixture of cold foods, usually including vegetables and/or fruits, often with a dressing.”

When I think of a salad I think of greens. Lettuce, arugula, spinach, something leafy. No leafy stuff in here!

It actually wasn’t cold either. The base was a mixture of slightly cooked celery, radishes, green turnips and corn. I don’t really like any of these vegetables so most of them were left on the plate.

The beef was good and I loved the yuzu dressing, but the dish was very uneven. Sometimes I would have a bite and almost choke it was so spicy. Then other pieces were simply bland.

We took a brief look at the dessert menu before leaving and saw a sesame white chocolate dessert that sounded absolutely wonderful. Unfortunately our waitress told us their pastry chef had just left so many of the desserts were unavailable.

I did enjoy the atmosphere though and would probably come back for a drink at the bar and an appetizer. The glasses of wine were surprising priced from $11 and up. I think they start at $20 a glass across the hall at the Rose Bar so that’s a significant difference.