A Nice Dinner at Punch

December 11, 2007
So after a completely emotionally draining week at home I was spent. All I wanted when I woke up Saturday was to have a relaxing trip home where I didn't have to deal with anything. Of course this didn't happen. Saturday ended up being awful and when we finally got home about 5 hours late I told Mr Trekker I was getting into bed and I wasn't sure if I would ever get out again.

Luckily, he intervened and said the six little words that I can't resist "I'm taking you out to dinner." So I dragged my depressed self out into the night air. Buffalo had been so cold I was always darting inside to the heat. NYC on the other hand was perfect. There was a chill in the air but it felt crisp and fresh against my skin. I was finally starting to feel a little better so we headed to Gramercy Tavern to see if we could get a seat at the bar.

Of course we walked up and saw that the bar was about 3 people deep and there were also people waiting outside. I was a little disappointed but I had been expecting that we wouldn't be able to get in. So we went over to our backup Bar Stuzzichini.

As I walked into the door I could already see the people- everywhere!!! The bar was jam packed and people were waiting all over the place! I couldn't believe it! This ended up being the case everywhere we tried! Lunetta packed. Craftbar ridiculously packed, Pipa completely utterly ridiculously packed. I was beginning to fall back into my depressed state more and more with each place. I forget the crowds of people that come into the city in droves during the holidays.

We were just about to give up hope when we walked by Punch. We looked in we could see a couple empty spots at the bar. Hallelujah!!!

We ran in, grabbed our stools and gave a huge sigh of relief. It had been almost an hour since we left our apartment and we were starving! I tried to look around at the scene of the place to calm the rumbling of my tummy.

We have been here many times for brunch but the space looked very different at night. The front bar area was dark with candles at each table and on the bar. It gave a nice secluded feel to a usually bright white and sterile room.

The bartender came over and handed us the menus.

First of all I was shocked at the incredibly reasonable prices on the bottles of wine. There were easily over 30 bottles that were under $30. I finally chose a nice Sauvignon Blanc from New Zealand and we set to ordering our food.

Mr T. ordered an appetizer of Steamed Clams & Tiger Shrimp which came in a Lemongrass Broth with Grilled Toast. I tried a bite of his shrimp and declared it bland.

Mr. T looked at me like I was crazy and pushed a piece of the soaked toast into my mouth. Um...okay I was wrong. The bread had soaked up all the spice that the shrimp obviously could not. It ended up being a pretty decent dish but we agreed we wouldn't order again because it still needed something to bring out the seafood flavor a little more.

For our entrees we both ordered the Filet Mignon. I honestly wasn't expecting much as this was our what, fifth, sixth choice of restaurant maybe?! But I was pleasantly surprised. 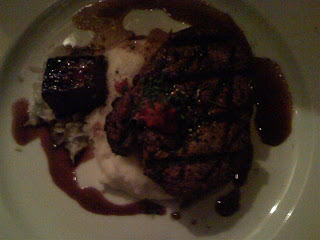 The filet itself was extremely tender and huge! So huge I ended up taking half of it home with me! It came atop some buttery mashed potatoes and a side of braised leeks.

The Leeks were the only thing I didn't really care for since they seemed too limp and watery, but see that chunk of something on the side there?

Oh yeah!! That's a big piece of Double Smoked Bacon!! It really doesn't get any better than this! The smokiness of the Bacon was intense and would have overpowered the meat if you weren't careful. Luckily I just had a little nibble with each bite and it was perfect.

So even though I took half of my filet home I caved in for dessert. (Honestly what girl doesn't!) We decided to split their Vanilla Creme Brulee and got some Butterscotch Ice Cream on the side.

The Creme Brulee was great...I've honestly never met a Creme Brulee I could hate. But the ice cream stole the show!

It was so rich, creamy and decadent I don't think I would be able to eat a whole scoop on it's own. I really needed the vanilla from the brulee to take a little of the rich flavor away but it was good!!! Mr T. is no where near the ice cream fanatic that I am and he declare it one of the best he's ever had.

So we had a very nice experience at Punch overall. You really can't beat it as far as value goes. The Filets were only $24 each and our fantastic bottle of white was $26!! The appetizer was the only pricey thing and we didn't even enjoy that much.

Punch is not a destination place but a solid place for the neighborhood that we will be returning to soon.