December 25, 2007
Between the holiday season and everything else going on I am a little behind on posting. Some reviews may never make it, we'll see what happens but I'll try and give it a go!

So last weekend my friends from home came to visit to see NYC at holiday time. We did all the touristy stuff like Rockefeller Center, Times Square, Time Warner Center, etc. We even stopped for a drink at Hawaiian Tropic Zone since we figured we were already acting like tourists we might as well do it up!

By the end of the day we were starving and wanted to get out of all of the crowds. I figured Tribeca would be pretty devoid of people so we hopped in a cab and headed to EN Japanese Brasserie for dinner.

We got there about 6:15 and were seated right away even though our reservation was for 6:45.

We ordered some beers and shochu while we looked at the menu. 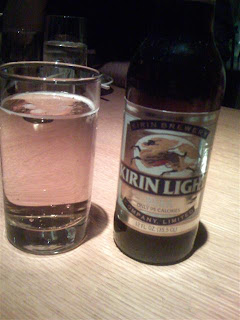 EN is basically an izakaya where you order small plates of food to share while drinking. We decided to go slow and order only a few dishes at a time and then stop when we got full. 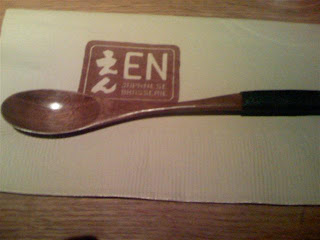 The first dish we started out with were the Ebi Shinjo. 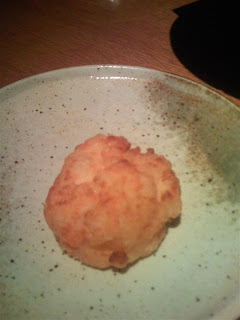 These are basically balls of ground up shrimp that's covered in sea salt and fried. I don't need to tell you that anything fried has a good chance of being tasty and this was no exception. 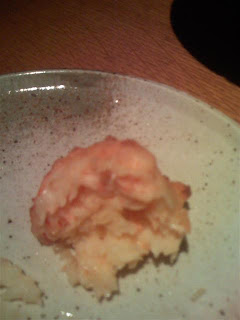 The outside had a nice light crust and the inside was filled with hot chunks of shrimp. A perfect dish for drinking with beer!

Next up was one of my all time favorite dishes Miso Black Cod. I've talked about having this before at Nobu, where it was first made. I was impressed with EN's version. The fish was cooked perfect and although the sauce seemed a little bit thicker than Nobu's the flavor wasn't as sweet. Very good! 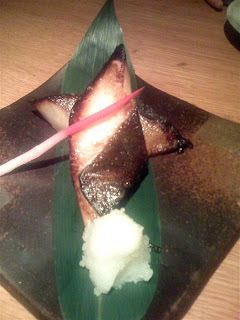 Our next dish was probably my least favorite of the night the Crispy Fried Chicken. 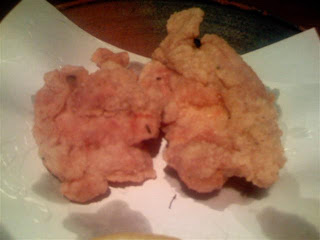 The chicken came out a little too greasy (I hate when you can see the grease spots- gross!) The poultry itself was moist but it lacked flavor. Our next dish was the Stone Grilled Wagyu. This is kobe-style beef that was so tender and moist it was falling apart a little bit. It came with a ponzu citrus sauce that gave a nice acidic taste to the meat. 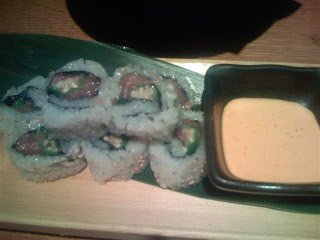 Our last dishes were some pieces of cho toro (which I can't find the picture of) and a spicy chu toro roll. Both were fantastic but a little on the small side for the price I thought.

We still had some room left at the end so we ordered some desserts to share. First up was the trio of ice creams. 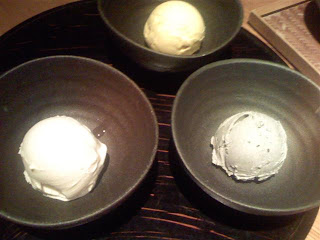 That's black sesame, pumpkin and vanilla. I was really excited about trying out the pumpkin but it ended up being only so so. The black sesame and vanilla both were great but no where near as good as at Chinatown Ice Cream Factory.

Next was the Flourless Chocolate Cake with Green Tea Ice Cream. 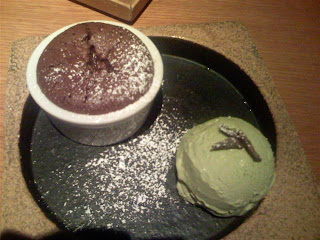 Kind of a classic dessert dish you always see on the menu in Japanese restaurants nowdays. This one didn't disappoint with the bittersweet chocolate of the cake balancing perfectly with the green tea ice cream.

We went all out for our last dessert and decided to try something new. This is the Oshiruko. 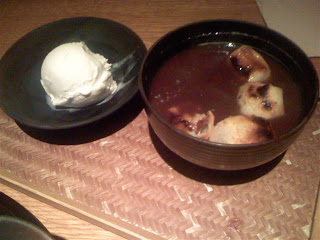 It's described as a Sweet Red Bean Soup with Mochi Rice cakes. I thought it was pretty disgusting. I have never been a big red bean fan and that's all this was. My friends liked to dip some of the ice creams into the soup as a topping but no one enjoyed the rice cakes.

Towards the end of the meal my friend and I were getting sick of all of the beers and decided to try out their cocktails. The waiter recommeneded this one to my friend and it was awesome!!! 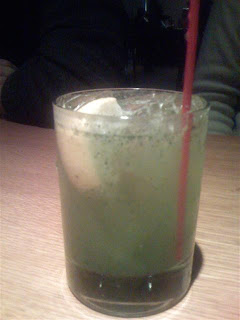 It's called the Seppun. It's shochu mixed with yuzu citrus, grapefriut juice and shiso. Really tasty. Much better than my White Peach drink that had a little too much peach pulp.

Our waiter was attentive the entire dinner and it was nice to have a quiet place to relax after the hustle and bustle of the day. I think EN is a great place but maybe a little too pricey. Those little dishes really add up in the end so you have to be careful of how much you order.

Macrina Aivazian said…
Good to know your review - they're participating in our food show so I'm very excited to see them! www.cookeatdrinklive.com
October 27, 2009 at 11:03 AM

Tasty Trekker said…
What exactly is En doing there? I didn't see them on the event schedule. I actually thinking about atteding this event.
October 28, 2009 at 12:16 PM