November 15, 2007
So I was out shopping in Soho early one afternoon trying to get some early Christmas shopping done. I HATE dealing with the crowd of people that swarm Broadway between Thanksgiving and Christmas. The holidays turn people into a crazed and unruly bunch. If you don't believe me try walking down Broadway in a week or so. You will never be the same!

So I set out early and went to just about every store imaginable and came up with nothing. I was pretty depressed by the end and my stomach was running on empty. I needed some comforting food fast. That's when I remembered Soho Park.

Soho Park opened about a year ago and is basically just a cafe/ grill sort of place that caters to the SOHO shoppers. I figured I could grab some good food fast and be on my way.

I decided to order some Pomme Frites with a side of Garlic Aioli and a bottle of water. 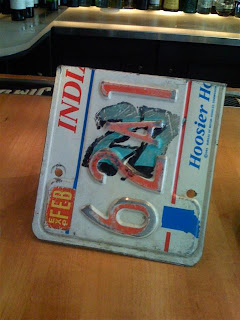 They gave me this license plate and told me to sit wherever. The license plate was to act as my order number so the waiter could find me.

I thought this was kind of neat and went with the kitschy decor of the place. Since I was solo I just grabbed a seat at the empty bar and got a better look at the place. 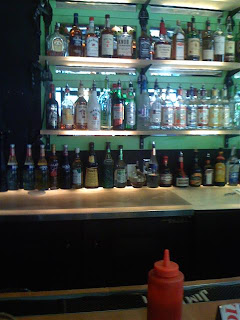 For just a grill type place they have a surprising amount of top shelf liquors and some good beers!! For example, they had Kindl Berliner- Weisse, War of 1812 Amber and one of my personal favorites- the Sixpoint Sweet Action!

So I happy relaxing and just taking the place in but I was thirsty. It had been about 10 minutes and my bottle of water had never come. I got the attention of one of the waiters and asked him if I could have my water. He nodded and came back a second later with a glass of ice water.

Now clearly this was not the $2.75 bottle of water that I had paid for. I tried to say something to him but he was gone before I even had a chance to open my mouth.

About 20 more minutes went past and I just sat their watching group after group of people get their food. I kept telling myself maybe they had ordered after me. Maybe the fries are backed up. Maybe I'm not invisible!!

Finally I watched a group of six people come in, order their food, receive their food and leave all within about 10 minutes. I had had enough.

Not that I wasn't trying to get someones attention- I was. I had been trying to flag down a waiter forever. I finally got us and went to the counter with my dilemma. They immediately asked me where I was sitting and said it would only be a second. I went and sat back down and my fries came out right away.

Now clearly these were not MY fries. My order had been lost but there was no apology or anything from anyone. I was kind of upset and wanted to complain but I was starving and needed some food. 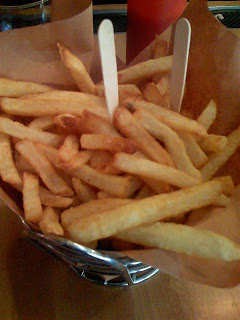 My basket of frites were decent. Half of them were cooked perfectly crispy and half were a little limp. Sometimes I would get one with tons of salt. Sometimes one with none. I think they must have put an old batch in with a fresh one.

The garlic aioli I didn't care for at all and I ended up using ketchup instead:( So overall, I was pretty disappointed in my meal. In the end I spent about an hour in this place and came out a little less happy than I had going in.

Oh- and I never got that damn bottle of water either.