November 29, 2007
We've lived in the area for over 6 years now and never tried out the steakhouse 5 blocks away, Angelo and Maxie's. Even though we love steak!! A couple weeks ago we noticed they had opened a little outpost of their steakhouse called Maxie's Bar and Grill. I walked by it one day and noticed they had a lot of plasma televisions and it looked pretty nice.

Once Sunday rolled around both of us wanted to go watch the football games but we were in no mood to sit around a dank bar all day. We decided Maxie's might be a good choice.

We got there right before 1:00 and only about 3 tables were filled, There was an older couple at the bar drinking large martini's (at 1:00 gasp!). I was a little surprised to see that the bar itself only had a view of one of the TVs. The rest were spread out in the dining area.

Since we were watching multiple games I decided to ask the waitress where our best choice would be to sit. They were extremely accommodating and told us to sit wherever and they would make sure to put on the games we wanted.

So Mr. T and I grabbed a seat, ordered some drinks and settled in.

We decided to order a Caesar salad and some chicken wings to split. Why we started with this order and no beef I'll never know. We were in a steakhouse for goodness sake!

Needless to say the wings were pretty bad. One whiff of sauce and I knew it was Franks Red Hot mixed together with some other sauce that gave it a strange fluorescent orange glow. The wings themselves looked big and meaty but were actually about 50% fat. No good.

The Caesar salad was exactly like you would expect at a bar and grill. Good thick dressing- pretty standard salad except that it was pretty big for $4.95! I would get it again just because it's such a great value.

After our disappointment with our wings we decided to try out one of their burgers. They have about 10 different burgers ranging from a Coffee Burger with Roasted Shallots to a Mexican Burger with Salsa and Guacamole!

We finally decided to order the Snake River Kobe Beef Burger with truffle butter and Munster Cheese. They have about six different cheeses you can choose from including goat cheese which I hardly ever see. 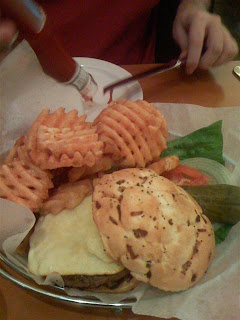 The burger itself was cooked perfectly and super juicy. I honestly expected the patty to be a little thicker but it ended up being a nice bun to meat ratio. As you can see the burger came on a Onion Bun. I actually enjoyed the flavor of this roll a lot but I think they should say something on the menu about it in case people prefer plain.

The burger is also supposed to come with shoestring fries but I asked to sub in their waffle fries which they happily did. They were very crunchy around the edges but could have had a little more crunch throughout the middle. Not to bad though. Pretty decent waffle fries.

One small con was that they had way too many waiters on shift for the amount of people. Our waiter was extremely friendly and attentive but sometimes we felt like the others were just hanging out listening to our conversations. I assume this is something they will change though, as they ease into their new space more and get a feel for the times and crowds.

Overall we enjoyed this place. The burger and salad were very good and cheaper than many other places in the neighborhood. On the way out we noticed they had menus out saying they delivered.

We were so happy!!! Our other go-to bar food delivery place has gone severely downhill and we had been looking for a replacement for months!!

So this means we probably wont be back for a while because we will be ordering it 3 times a week but hey- we'll be giving them lots of business!