Cha-an is just my kind of place

November 14, 2007
So I have a couple posts from a few weeks back ,since our computer decided to break down and we had to send it away. Leaving me a shell of a human being behind!! Just kidding!

Anyway, during this time, I had two of my best friends in the world come visit for a weekend. Yey Me!!! They came in early afternoon on Friday and we kind of just chilled out for a little while and then walked down to the village.

Our first stop was the Stoned Crow for a couple beers. I love the Stoned Crow- It's one of those divey bars where I could chill out at all night and listen to some good music on the jukebox. They have Sixpoint Sweet Action on tap as well, which is always a plus for me.

Once we finished a beer or two we realized we were starving! None of us had really eaten any lunch but we also didn't want to spoil our dinner so we spilt a burger between the 3 of us.

This was actually the first time I have ever eaten at the Crow although I do know the chef is the former burger slinger from Corner Bistro, so I knew it had to be good. And oh boy- it was!!!

Unfortunately there's no picture because we were all so famished we attacked it right away! But it was a perfect medium rare, with a salty char on the outside and a good toppings. A very good burger and pretty cheap by NYC standards as well.

Once Mr. Trekker met us at the bar after work we decided to head over the East Village for drinks at Angel Share. Mr. T felt he had to "catch up" with us since we had been out for a while and sucked down a couple of Groovy cocktails! Man they were good! That place is dangerous with their awesome drinks!

Since the burger did little to cover all of the alcohol we were ingesting we decided to go no further and just have dinner next door at Village Yokocho. We got a table in the back where we could cook our own meat Japanese BBQ style and it was awesome! We ordered WAY too much food and had hardly any room left on the table for our plates! This is really such a great place to go to with a group of friends. Interactive dining:)

We were all incredibly stuffed after dinner but I really needed something sweet. I remembered Cha-an was just down the block so we headed there. The place was full when we walked in but after about a 10 minute wait we got a table.

This place is just a very tiny and cute Japanese Tea House which serves up some of the best desserts in the city.

We sat down and ordered some sake. 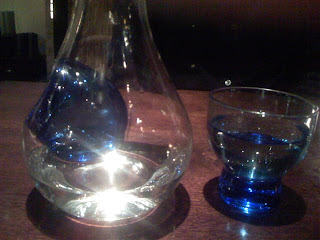 This is one of the few places where they pour your sake into a bottle like this. The sake is at the bottom in the clear part and then they put an ice cube in the blue bubble so it keeps the sake nice and cool. Pretty neat!

Then came our desserts!! 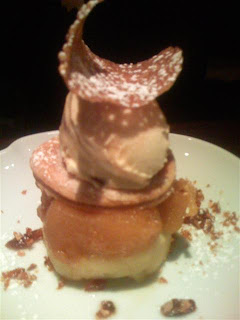 Okay, their black sesame creme brulee is to die for!!!! But it was time for something different so this is the Sweet Potato Apple cake with Carmel ice cream on top and the signature cookie! As with all Ch-an desserts this was a heaven!!! The cake itself was super moist and sweet but not sugary (if that makes sense)! Carmel goes perfectly with apples of course and it was just all around tasty! 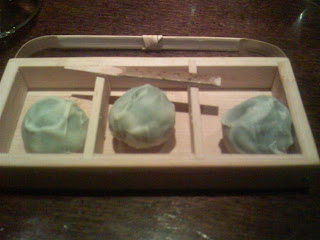 We couldn't leave without getting one order of Green Tea truffles. I am really starting to become obsessed with the flavor of green tea. Green tea cookies, ice cream, cupcakes (oh yes cupcakes, I'll post about those soon!) The truffles are the most decadent of the bunch and more than one would be too much for me but it was a perfect treat for the end of our meal.