November 12, 2007
I've been trying to come up with fun things to do on the weekend that don't involve spending a lot of money. I had read in the paper about this "Canstruction" gallery going on at the New York Design Center. It sounded pretty neat so we decided to check it out.


Canstruction® is basically a design competition held in many cities throughout North America. Teams of architects, engineers, and students compete to design and build giant structures made entirely from canned food. At the end of the competition, all of the canned food used is donated to help in the fight against hunger.


With such a great cause we just had to go. The designs were absolutely amazing. There were so many great pieces- here's a few of my favorites. 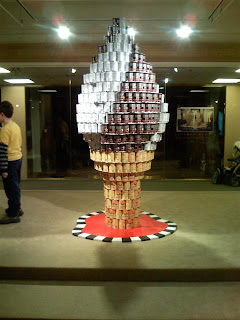 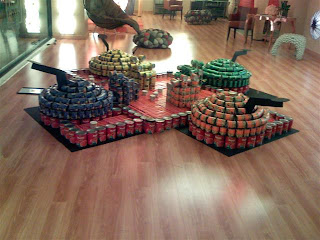 My favorite game from my younger years! Hungry Hungry Hippo!! 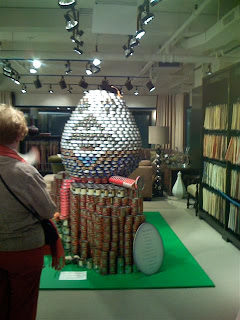 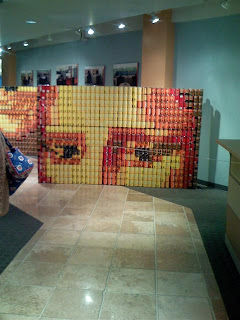 This one was my favorite piece of all. With only the naked eye, I couldn't make out what these cans were supposed to represent. As soon as I looked at it though the camera lens however, the Mona Lisa came right into focus. Truly creative and really awe inspiring.

After enjoying such a great show we decided to head down to Union Square and check out the new addition to our neighborhood, Irving Mill, which opened in the spot that previously housed Candela.

Since it had only been open a little over 2 weeks, reservations were hard to come by and we were only able to get a 6:00. I thought we would be the first ones there at this early hour but surprisingly the bar was full and there were about 5 other tables of people already seated!!

First off I really enjoyed the look of the place. They completely changed the decor from the dark, candlelight Candela to a bright, airy place with lovely wooden panels that gave the whole place a great rustic feeling.

Since it was still within the first month I was expecting some hiccups here and there. The first one started at the door. The hostess asked if we wanted to check out coats. I was freezing and declined but Mr. T handed his coat over and it was taken away as the other hostess took us to our table. We were expecting to be handed the usual coat check number but one never came. We thought this was a little odd but decided they probably knew what they were doing and we proceeded to browse the menu.

Our waiter came over and at first I was reminded of the over-the-top personality you sometimes find in an Applebees or Bennigans. He was loud and boisterous, a little too much at first, but truth be told I ended up loving him by the end of the night! He answered our questions and steered us towards a great bottle of Sauvignon Blanc. We had been thinking about doing the tasting menu but it didn't look as exciting as some of the other menu items so we decided to go a la carte.

We placed our orders and a minute later another server came over with a tray of bread and asked whether we wanted white or seven grain. I opted for the seven grain which ended up being the better of the two. The bread had a perfect crisp exterior and chewy soft interior. The butter was also nice in that it was close to room temperature so it spread easily.

Then the kitchen delivered an amuse bouche of Toasted Rounds accompanied by a White Bean and Garbanzo Puree with Radish. I have to say this was pretty unexciting. There was no flavor to the puree and the everything just tasted bland.

Next up came our appetizers. 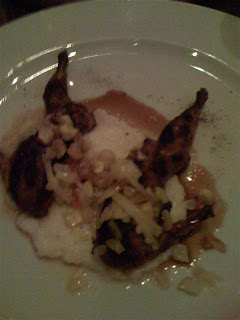 I ordered the Grilled Quail with Sweet Corn Relish, Cheddar Cheese Grits and Smoked Paprika. This dish had lots of different flavors going on that worked well together. The quail was a bit too salty for my tastes but it was cooked perfectly! The grits had a strange "un-gritty" consistency which was a little odd. If you've ever had the mashed potatoes at Gramercy Tavern it was kind of like that. They tasted good though. 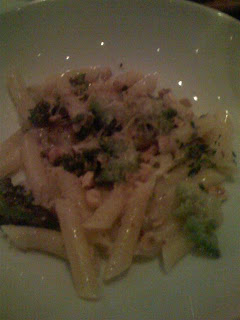 Our other appetizer was the Penne Pasta with Romanesco Cauliflower, Capers, Red Onions, Hazelnuts and Parmesan. I was expecting a little bit more from this dish in terms of flavor combinations and it fell a little flat. The hazelnuts contrasted with the other ingredients and there wasn't enough spice to make anything else really stand out. 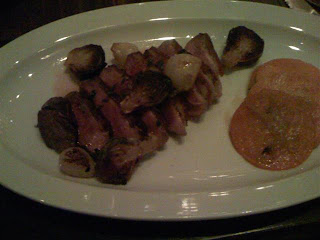 For my entree I ordered the Spiced Muscovy Duck Breast. This was fantastic! The duck was a perfect medium rare and came with roasted brussels sprouts, pearl onions and sliced sweet potatoes.

Our other entree was the Beef Short Ribs Braised in Stout Farro, Roasted Tomatoes, Marrow, Horseradish Cream and Stout. This was also fantastic! The short rib was soft and succulent while the horseradish cream played up the rich texture of the meat.

I feel the entrees were where Irving Mill really accomplished what it set out to do. Both of these dishes were not only executed perfectly but clearly focused on the best of the greenmarket while keeping that old rustic flavor. Just spectacular.

But in everyone's life a little bad food must fall. We decided to order a side of Roasted Cheese Pumpkin Purée with Chestnuts, Chestnut Honey and Sage since it sounded interesting. When I asked our waiter to describe it he used the word puree about 4 times and seemed less than thrilled. That should have been my cue that this wasn't a good dish.

This was truly horrible. The consistency was that of watered down baby food and it had a faint taste of burnt nut. Ick!! I think this is a case where the chef has a great idea in theory but it just doesn't work.

I was honestly too full for dessert but I just couldn't help myself when I saw the menu. 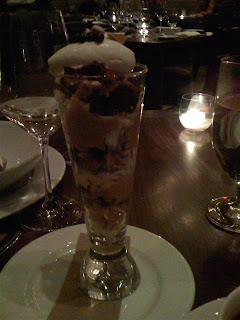 I ordered the Peanut Butter and Milk Chocolate, Caramel Parfait with Crunchy Meringue and Peanut Brittle.

Holy S**t this was SO good!!! If your a chocolate peanut butter fan this dessert is for you! I was so into eating this I couldn't even pay attention to anything else going on in the room. No conversation's were had during the consumption of this sundae!

So overall I thought the food was great and I intend to go back after they work out some of the kinks. For one, the courses need to be sent out a little slower. I had barely put my fork down on the plate of my appetizer when it was whisked away and my entree was served. When I go out to eat I want to relax and have a leisurely dinner. We were basically inside for a little under an hour from start to finish.

Secondly, they need to work a little better on effective communication between the staff. We got a little nervous about the coat check/no ticket and asked informed our waiter about it before we ordered. He said he would take care of it and we were all set.

Well.. the waiter never brought us a coat ticket and when we got up to leave it took about 10 minutes for him to find our jacket. The place had filled up and Mr. Trekker was basically searching through everyone's coat to try to find his! Luckily he did!

But some kinks were expected and I'm overall quite happy to have this new addition to our neighborhood. I see many chocolate peanut butter parfaits in my future!

Oh- and check out Canstruction to support City Harvest! It's a great cause!