November 24, 2007
My aunt happened to be in town for a conference the other night and we meet her and a friend out for some drinks at The House. After some great conversation and a couple glasses of wine, Mr Trekker & I found ourselves alone once again and feeling pretty hungry.

We didn't want to venture to far away so we decided to head over to The Smith, which had just opened in the former Pizzeria Uno spot. I had seen they had fish tacos listed on their website so I thought we might check it out.

The place itself reminds of Schillor's Liquor Store with it's black and white tiles. We grabbed a seat at the bar and ordered a couple beers.

They have a good selection of beers on tap and the menu looked quite good but we didn't end up staying more than one drink. Why? Because it was kind of creepy.

It seemed like there were about 50 to 60 people working there. There was literally a busboy per table. They all would stand at the back of the restaurant and stare out over the room. I have never seen anything like it.

I'm not sure if it was opening night or maybe they just thought they would be more busy! We just found it really strange so we decided to leave.

Now we were REALLY hungry and just wandering around the East Village when we wandered right by Momofuku Ssam Bar! I love Momofuku!!! And there were two seats left! Success!

We had a seat and took a look at the menus. 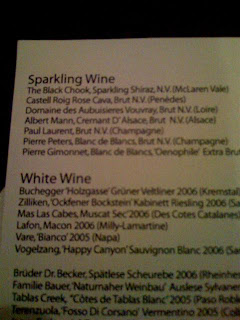 I ordered a glass of the first white wine on the list and Mr T ordered the regular Hitachino Ale. The Hitachino Ale was really nice! I've had the white and red ales before and never cared for either of them so I was surprised to like the regular one so much but I did.

We decided to start out with the bread and butter and some pork buns. 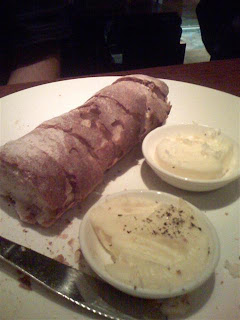 I'm not going to talk about the pork buns because I think everyone knows by now how fantastic they are.

The bread on the other hand was pretty good as well. They served it warm with two kinds of butter. The first was a sea salt butter from Vermont and the second was a goat butter from England.

Both were very creamy and rich. I don't think it was worth the $8 price tag since you get bread for free in many places but Mr. T really enjoyed it. 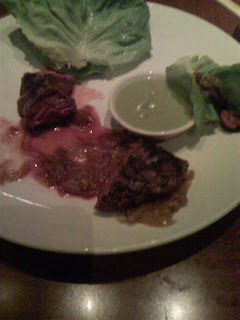 Then we got our Marinated Hanger Steak Ssam minus the kimchi (I hate kimchi). I loved this dish! A friend had ordered it last time we were there and I was so jealous I hadn't done the same.

The meat was cooked perfect and the sauce was great for dipping.

The funny thing about this dish though is that Mr. T didn't like it. He said it had no flavor!

We ended up getting into a minor argument over the taste since I just thought it was excellent.

How can two people have such different tastes over one dish is beyond me. (I think his taste buds were off that night :)

Anyway after our Ssam we decided to splurge for dessert. 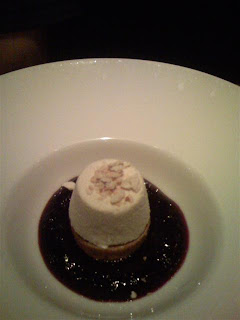 This is their PB & J concoction.

Oh well- I have way too many desserts that I'm already obsessed with anyways!

I woke up the next day and immediately wanted to go back and get another Ssam! I think they put something in their food that makes you crave it. Unfortunately Mr T didn't feel the same way so we didn't. Until next time Ssam!!