January 26, 2016
Mr. T and I took a trip up to the Bronx over MLK weekend for some Italian eats. We had a LOT to fit into one day...we may have overdone it a little bit. 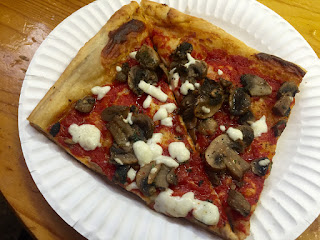 We started at Cafe el Mercato for a couple slices.  All the pies here are done Sicilian style with a thin, buttery crust cooked to a crisp golden brown and fresh tomato pomodoro. 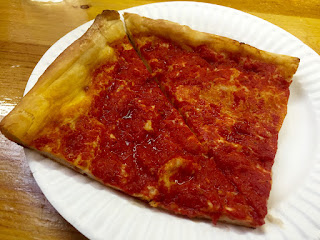 We could have gone crazier with the toppings like broccoli rabe and pesto, spinach and peppers or even a prosciutto with green fig but we stuck to the basics. There was something so simple and pure about this pizza.  I've honestly never enjoyed a Sicilian slice so much. 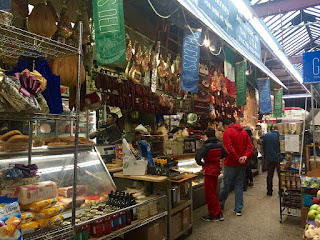 After the pizza we walked around the Arthur Avenue Retail Market a bit scoping out all the wonderful displays then stopped into the The Bronx Beer Hall, located in the center of the market for a flight of beers. 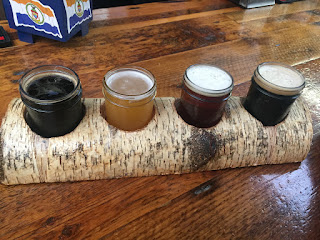 Everything's a little bigger in the Bronx right?  Well even the beer flights fall into this category where the usual 4 oz pours were replaced with half pints!  Most of the beers were from NY state breweries like Southern Tier, Sixpoint and Finback and even though we were still inside the market they had big TVs set up around the bar creating the perfect atmosphere for watching the Rangers game.

The next stop on our crawl was going to be Mike's Deli but then I realized we could order Mike's sandwiches right to the bar- BONUS! 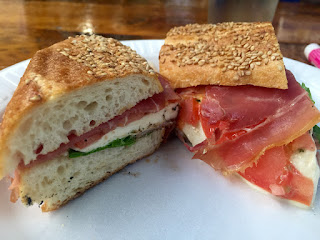 First up the Michelangelo with layers of prosciutto, fresh mozzarella, lettuce and tomato all on an incredible sesame seed roll.  Next the Big Mike's Combo- two fluffy squares of focaccia stuffed with luxurious slices of mortadella, ham, salami, capicola and provolone. 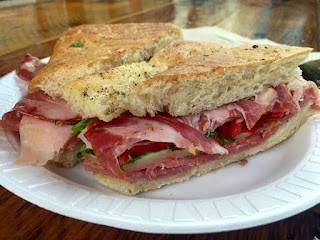 Wow- both of these were delicious but the Big Mike's was incredible.  The meat was so tender and not overly salty; easily the best Italian combo I've ever eaten.

When the Rangers game ended we headed to the actual Mike's Deli for some arancini to go then it was across the street for dinner at Dominick's...because obviously the goal was to see how much we could eat before exploding. 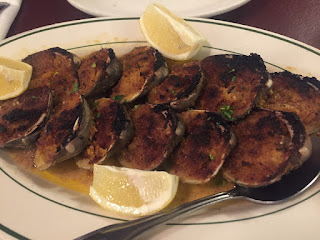 We began with an insanely delicious order of Baked Clams stuffed with garlic, olive oil and breadcrumbs toasted golden brown. 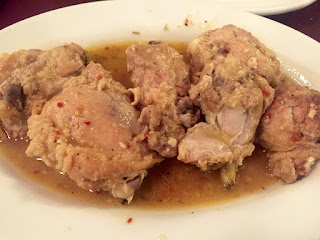 Then onto the Chicken Scarpiello, an incredibly tender plate of bone in chicken cooked with lemon, rosemary and hot peppers. 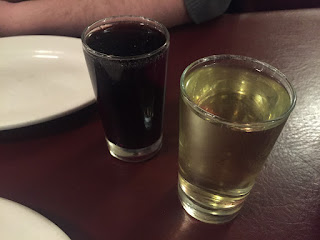 (wine by the glass options)

Dominick's was awesome but it definitely has some quirks. Here's a few things to know before dining:

1.  There's no menu.  You either know what they serve already or the waiter will read off the nightly specials and you pick whatever he chooses to tell you about.

2.  The seating is communal and it's tight.  Don't come here expecting to have a romantic night out because chances are you'll be elbow to elbow with two other people trying to twirl up their big bowl of pasta with a spoon just like you.

3.  Don't come expecting a bottle of Brunello.  Dominick's offers only two kinds of wine-red or white.

4.  It's cash only and don't expect a check either.  The waiter usually just reads the final amount at the end of the meal. 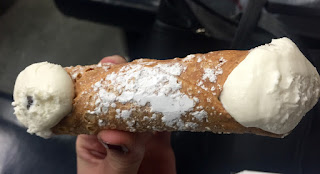 We were getting so full we ended up taking most of the chicken home to enjoy later that night then moved back onto the streets of Arthur Avenue in search of dessert at Madonia Bakery.  We picked up a thick vanilla creme cannoli piped to order... 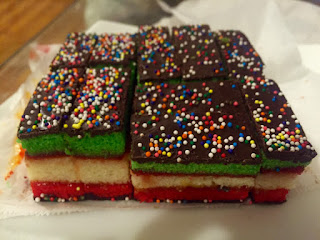 ...and some delightfully cake-like Rainbow Cookies that shamed just about every sad, stale version I had growing up.   We were actually spending the next day with friends out east so we picked up some extra cookies for them and then walked over to Calandra Cheese for something I've always wanted to try Burrino. 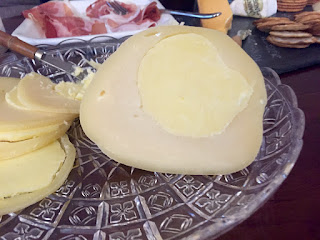 Burrino is the sister to more well known Burrata; however in place of fresh mozzarella cheese the outside casing is Provola (aged mozzarella) and instead of cream inside there's a big round of butter.  I'll admit when we sliced it open the next day everyone found it a bit odd at first but something about that firm fleshy cheese and deliciously creamy butter really hit the spot.  I can't wait for the next great excuse to slice open another one.

So there you have- an incredible Arthur Avenue Saturday in the Bronx.