May 19, 2014
After our lovely afternoon in Beersel we trekked back into Brussels.  Mr. T said he felt well enough to check out one more place so I took him to Moder Lambic which he missed out on the day before.  We grabbed a table outside and took a look at the bottle list.  I had been so psyched about all the Cantillon's on draft the day before this thought hadn't even occurred to me.

Oh my goodness that list...there were beers on there I never thought I would see in this lifetime.  We were both floored and quickly started formulating a plan to justify the expense of one of these gems.  Well Mr. T really hadn't eaten anything since we got to Brussels and I skipped dinner last night in favor of macaroons.  It seemed that we had actually been saving money so it was only right that we treat ourselves to one of these beers.  See how wonderful that worked out:) 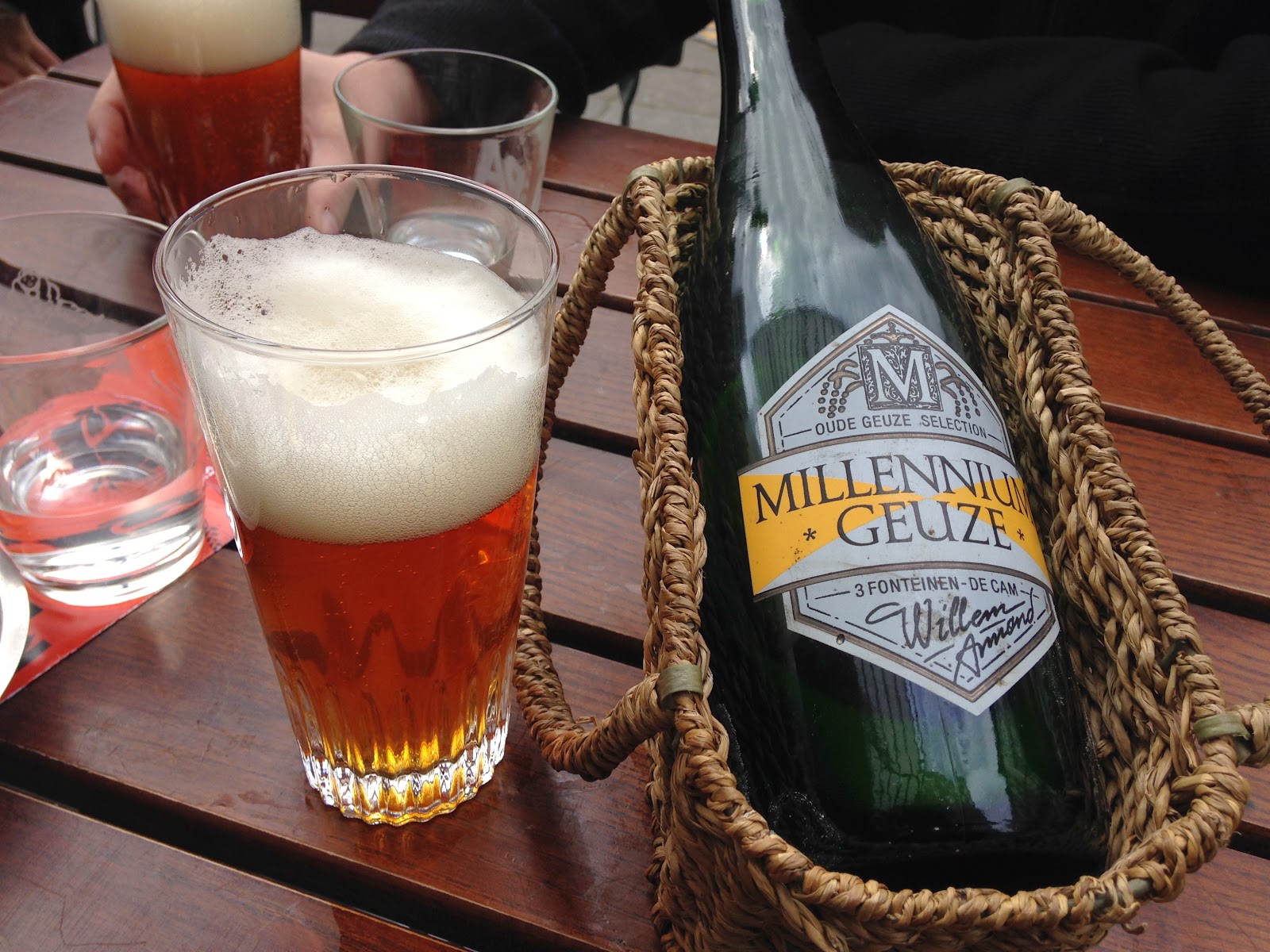 We began with an incredible rarity from Drie Fonteinen the Millennium Geuze.  We had just left the brewery so it just seemed fitting and this certainly did not disappoint.  The smell was super damp and funky with aromas of earth and cheese...the taste surprisingly soft with flavors of hay, citrus and honey.   This was just a phenomenal treat. 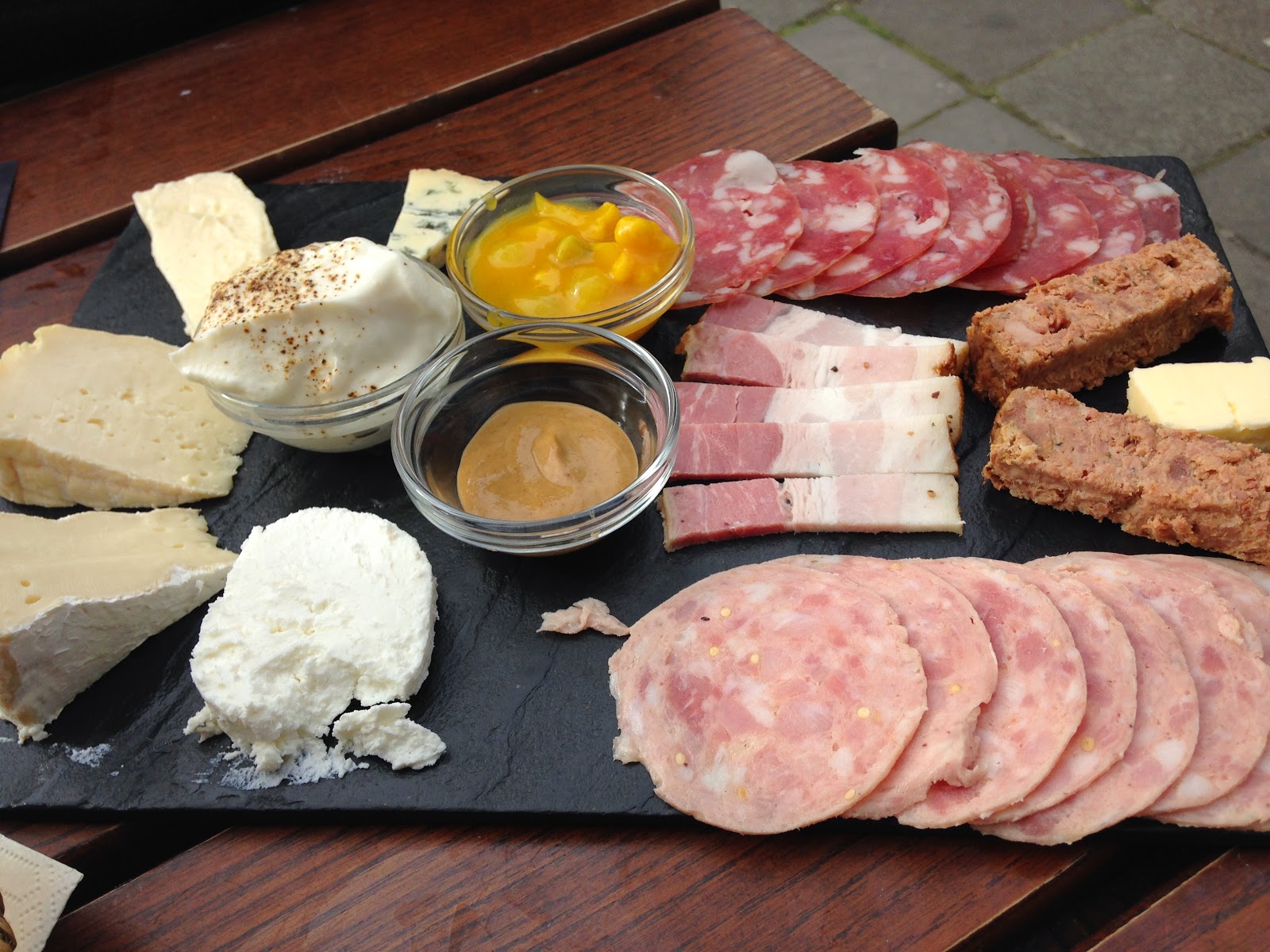 Apparently ordering a Millennium Gueze means you deserve something to eat.  This platter arrived complements of the house (they probably overheard our conversation about not eating).  I steered clear of the Pottekee from yesterday but the rest of the cheese and meat were wonderful including a thick duck liver pate. 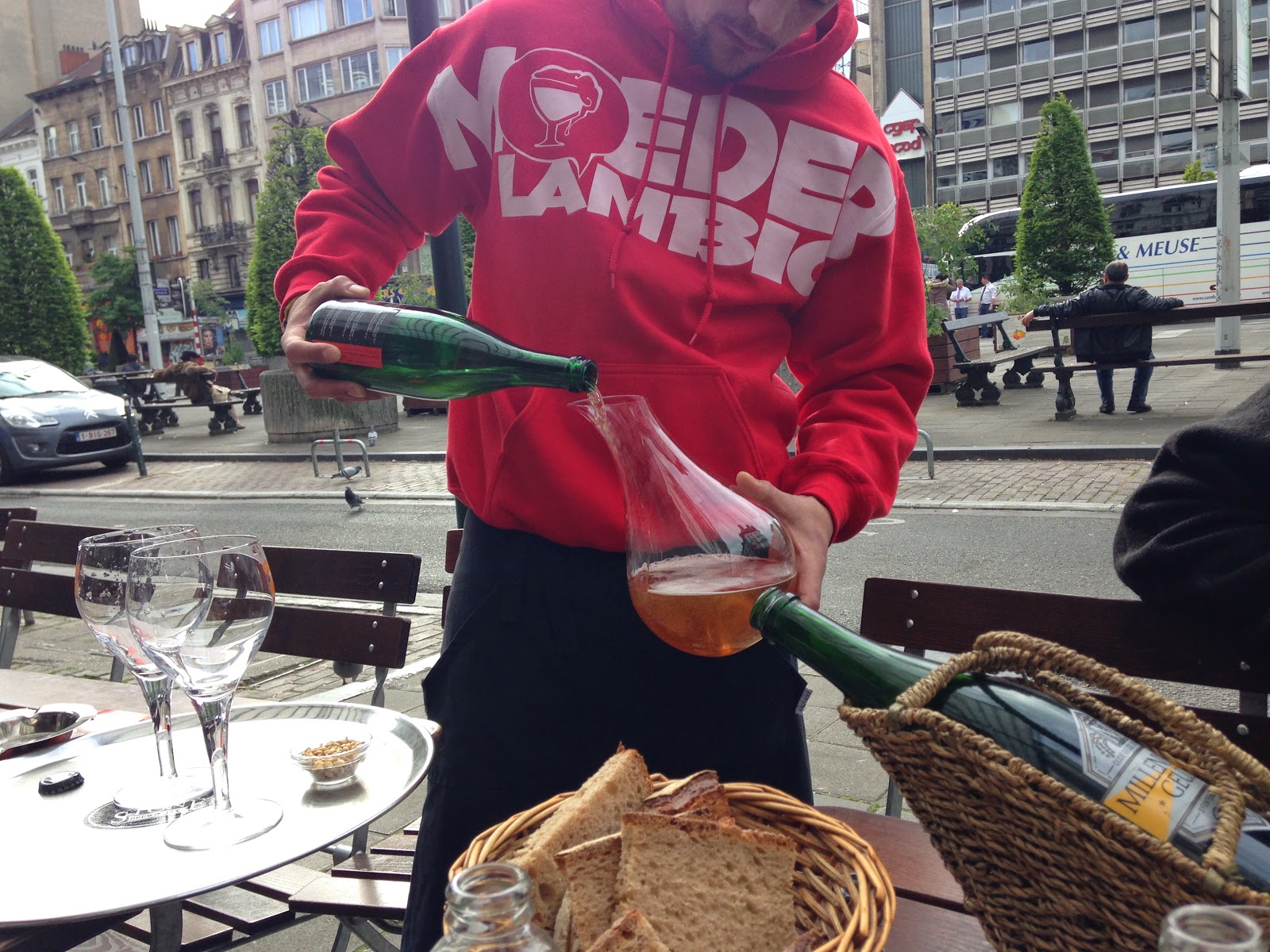 We moved on from the Millennium to a bottle of Cantillon 50 Degrees North- 4 Degrees East.  This particular geuze had been aged in French cognac bottles for 2 years.  The waiter decanted it in order to get all the incredible aromas and flavors from that process. 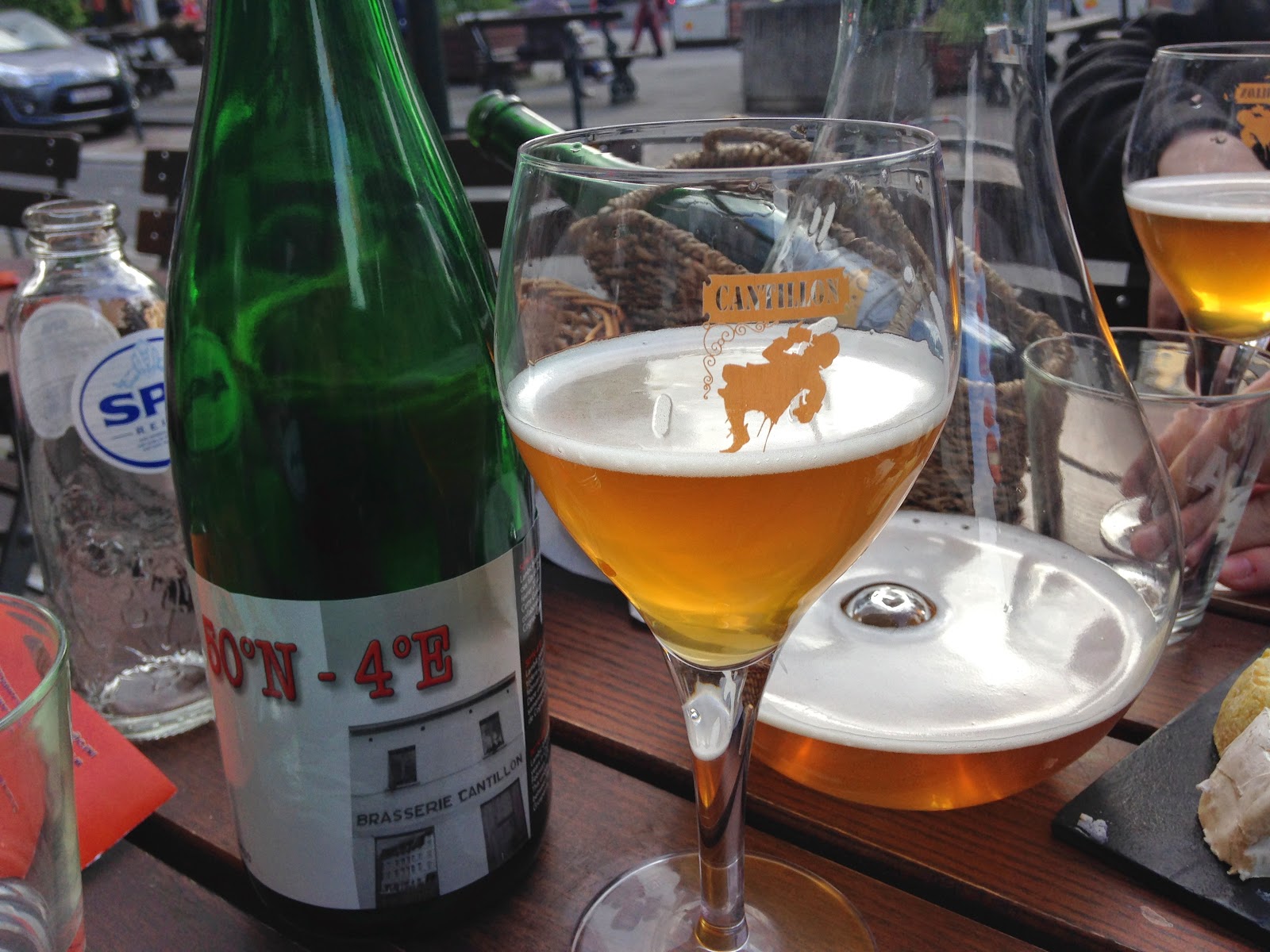 This was honestly unlike anything I've ever had before. There was that classic musty Cantillon smell but with the sweet aroma of booze on the end.   Lemon, vanilla and oak seemed to dominate but it was so complex I kept getting something different each time I took a sip.

After those two bottles Mr. T was ready to pack it in for the night.  He was still nowhere near 100% health wise so he went back to the hotel to rest and I went to grab myself something for dinner- mussels! 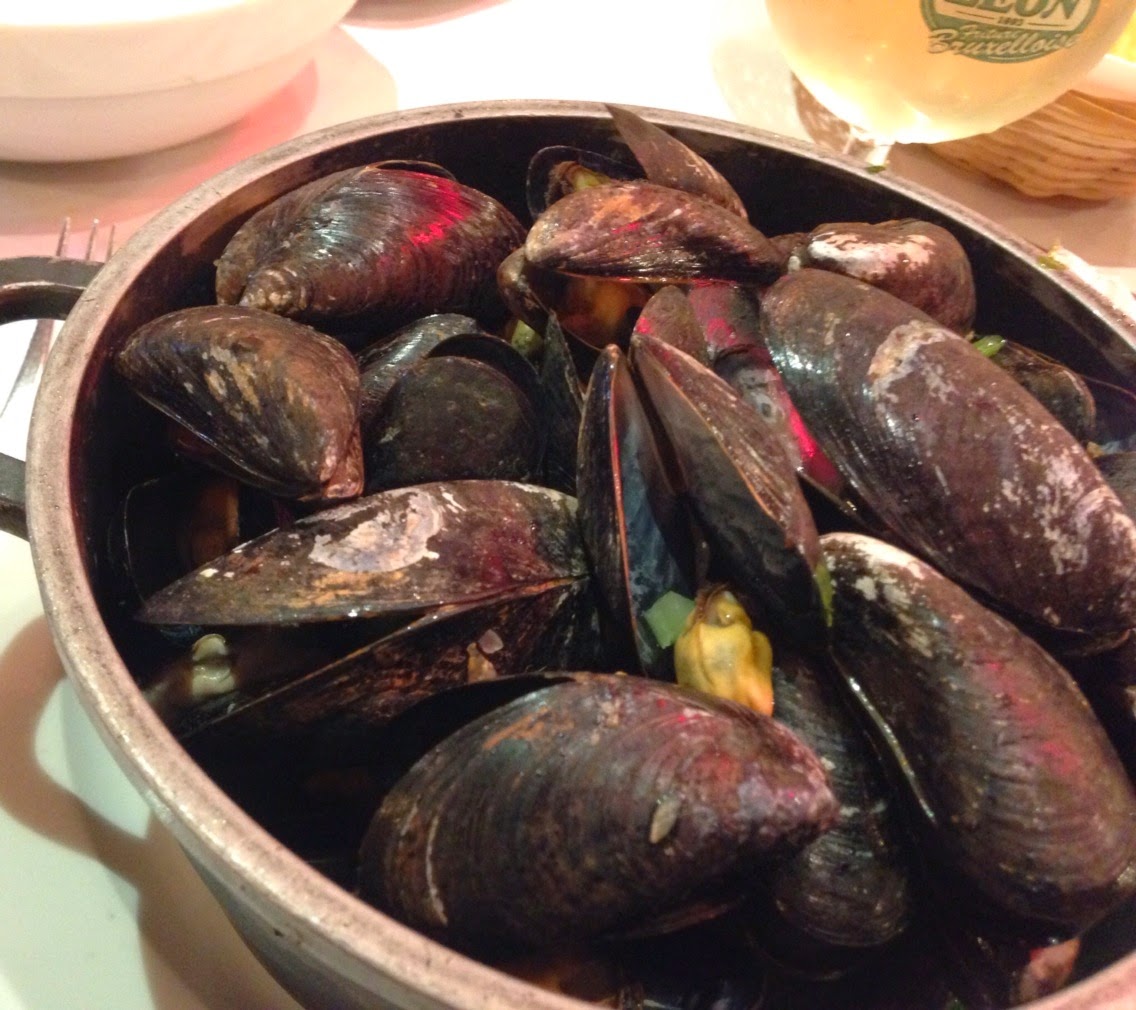 Our last visit I came to Chez Leon and watched Mr. T take down a bowl of mussels and frites while I looked on munching on bread and butter...the only thing my system was keeping down at that point.  I thought it would only be right for me to return to Chez Leon to get the meal I missed before.  Then Mr. T wouldn't be missing out on anything new either. 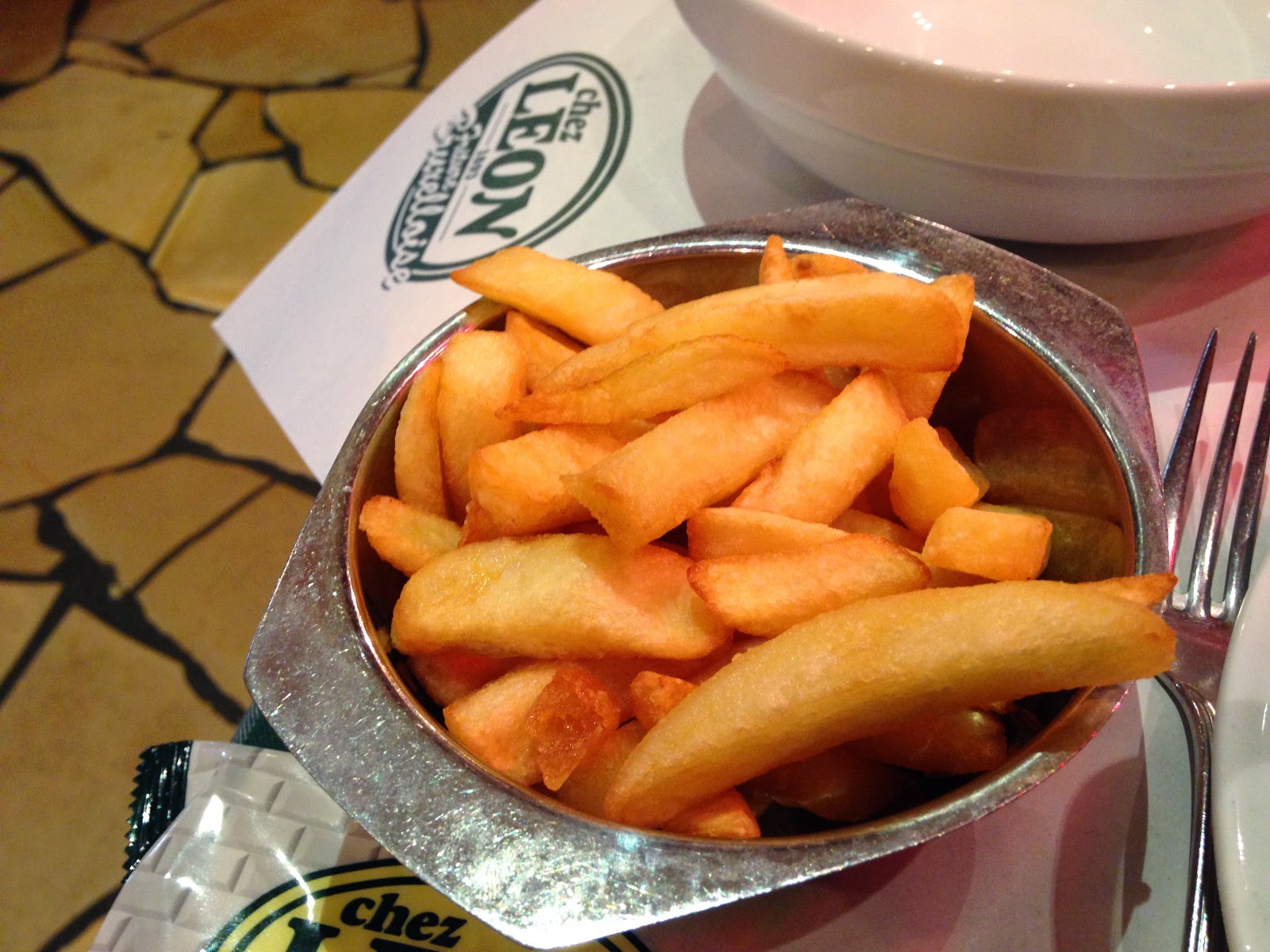 I was absolutely exhausted after my meal and made my back to the hotel (after stopping at Pierre Marcolini again for a little treat of course) and went fast to sleep.  We packed in a LOT our 2nd day and tomorrow we only had the morning to do a few more things before heading to the second stop on our trip- Copenhagen!