September 02, 2009
I found myself in Coney Island the other day for work right during one of the nicest summer days we’ve had this year. It was 80 degrees, lots of sun and I could smell the ocean air in the breeze. I decided to take a quick walk down the Boardwalk for lunch, to one of the most famous spots on the island- Nathan’s.

Nathan’s has been around since 1916 and it was started by a Polish immigrant. He used the little amount of savings he had to open up a small stand selling hot dogs. The hot dogs became such a hit people came from far and wide just to try them out. The rest is history. Now this is one of the most popular hot dog spots in the country.

Look at the size of this place! Not just a little stand anymore. 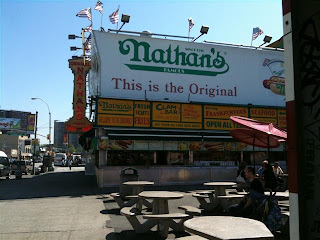 Now Nathan’s is home to the infamous hot dog eating contest every 4th of July and there are locations all over the USA. Quite a story.

I had only been to this original location once before, years ago when Mr. T and I came to Coney Island for the first time. It was early November and the weather was brisk and chilly. I remember being bundled up in a huge winter coat and thinking to myself that this was NOT the best time of year to visit!

This day however was perfect, so I quickly glanced over the menu and noticed they had a lobster roll. 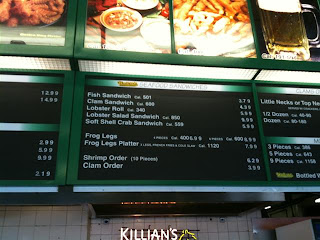 I thought about it for a minute but then common sense took control. Who goes to Nathan’s to get a lobster roll??

Instead I went for the classic dog. Here it is slathered in some spicy brown mustard. 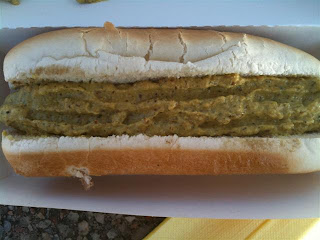 The dog was okay but I’ll have to say it was a little disappointing. It was around 11:45, so definitely early for lunch, but it just tasted so old. The casing didn’t have the same snap I’m used to and the ends of the dog were downright rubbery.

I’ve had fresher, better tasting Nathan’s dogs from Yankee stadium. The cashier was a little bit odd as well. I paid with a $20 bill and he gave me back my $15.65 change all in singles and nickels. 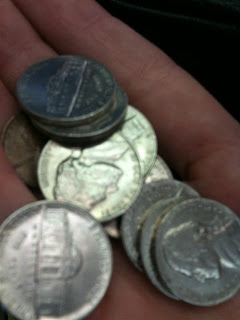 Maybe he was mad I used a $20? I had apologized saying I just went to the bank but I guess that didn’t matter.

Oh well- even though the service was strange and the dog kind of funky, I still enjoyed myself completely and here’s why.

Something about Coney Island made me feel like a kid again. I thought about all the times I walked on the boardwalk of the Jersey shore with my parents. I thought about the countless hot dogs I’ve had at different BBQ’s in Buffalo with my brothers. I thought about that cold and miserable first day when Mr. T and I were too broke to afford the Cyclone.

So many memories! It was really great.

I wish more people would come out to visit Coney Island. It’s not very pretty, it’s kind of dirty in a way even, but it’s not about that exterior stuff. It’s about returning to your youth, those simpler times in life and the way it makes you feel inside. Sometimes I can get so wrapped up in the NYC hustle and bustle I forget what it feels like to be relaxed for a moment. To forget about all of the stress and aggravations of being an adult and for just one moment, be a kid again. It’s a nice feeling.