October 12, 2008
The weekend was the NYC Food and Wine Festival and I have to say it was pretty awesome.

We had tickets to the second session of the Grand Tasting Saturday from 3:00-6:00. We showed up at the welcome center first and were greeted with free chocolates, a generous gift bag filled with all sorts of goodies and a free Waterford Wine glass.

I was pretty jazzed already and we hadn't even gotten into the Tasting yet!

The tasting was held on Pier 54 and it couldn't have been a more perfect day for the event. The sun was shining and everyone just seemed to be in a great mood.

Mr T and I got a chance to try everything! I mean everything! There wasn't a station we missed.

The best dish of the night goes solidly to Alex Urena from Pamplona. 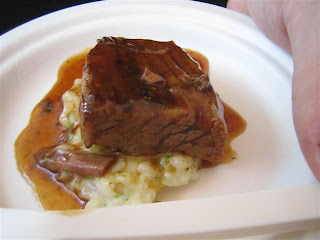 This was braised Washugya Brisket with Manchego rice and Black Olive sauce.

OMG this was so good! The meat was so tender it just fell apart as you cut inside.

The sauce was excellent as well as the rice but the meat really stole the show on it's own.

Towards the end we came back for another bite and he had run out of the sauce and rice. We tried the meat on it's own and it was still beyond delicious.

Pamplona is now on the top of my list to try out.

The second best dish of the night was the pizza from Bayard's events catering. 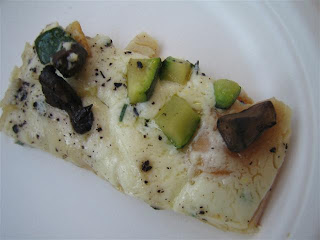 This is no ordinary pizza. It's made with Ribola cheese and topped with white truffle oil.

Wow! Both Mr T and I were kind of blown away. We weren't expecting much from this pizza but it was insanely delicious.

The crust was extra crispy and the truffle oil and cheese just made it decadent.

The next dish wasn't the best of the night but I have to include it because it was made by Dave "I'm not your bitch, bitch" Martin from Top Chef. 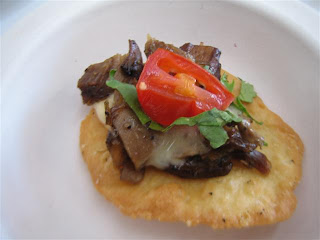 The duck on the top was very good but the bottom cracker was a little overwhelming, taking away from the flavor of the duck.

However, Dave was super friendly and just seemed to be having a good time so I have to love it..and him!

Other food highlights were the amazing toffee milk chocolates from XOXO chocolates out of Boulder and the mushroom dumplings from Waikaya.

But what was even more prevalent than the food was the drinks!!!

They had so much alcohol it was unbelievable. Tons of wine vendors everywhere doing tastings of everything,including my favorite La Crema. There was also beer like Blue Moon, Corona and Sam Adams.

And then there was the liquor!! OMG! There were shots of Jim Beam, Mini mojitos, tons of different flavored vodkas, Peanut Liquors, tequila...on and on.

Mr. T and I stuck to wine and beer only and after an hour after being there we were already feeling no pain.

It was an awesome event.

We did the Meatpacking Uncorked on Friday night which was pretty cool as well.

All of the Meatpacking boutiques opened their doors for a shopping and wine tasting event throughout the area.

They were very generous there as well! Diane Von Furstenberg was giving out mini bottles of champagne to everyone!

So all in all it was an awesome weekend.

It was so cool just to see so many chefs as well.

Over the course of the weekend I saw, of course Dave Martin, Cesar Casella, Anita Lo, Anne Burell, Paula Dean and the best one ever....Morimoto himself!!!

I cannot wait till next year and am even thinking of making the trip to the South Beach one in February. We'll see what happens!
NYC Food and Wine Festival