How Sweet It Is

October 14, 2008
I was walking home from work today and had my mind on getting some sweets. My plan was to walk through Chinatown, up the LES a little bit and then stop at the Chikalicious Pudding store on my last leg and pick up some cupcakes since I’ve never tried them out.

Well as I was walking up Allen street I literally stumbled across this dessert shop. How Sweet It Is. 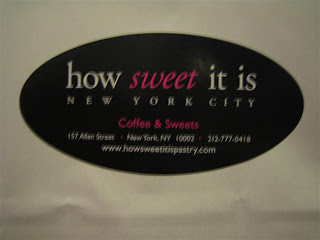 Since that was exactly what I had in mind, I went inside and loved what I saw.

A little counter housed a bunch of pastries, muffins, brownies and most of all different kinds of cupcakes!!

The woman behind the counter was extremely nice and she explained each off the different flavors of cupcakes, to me: Red Velvet, Peanut Butter & Jelly, Nutella, German Chocolate…I could go on but I think you get the picture.

The last one she said got me though. Their special of the week.

The Chocolate Guiness Stout cupcake with pumpkin icing and pumpkin cream cheese frosting in the middle.

I somehow made it all the way without digging in just so I could get some pic.

How cute and festive is this?

Now from the outside it looks like just a normal old chocolate cupcake.

But as soon as I started to unwrap the paper I knew this was going to be different. 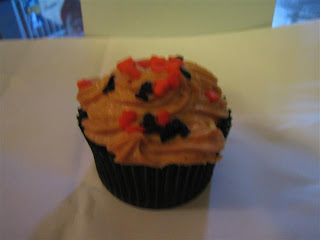 As I peeled away the edge I was hit full force with the smell of nutmeg and cinnamon.

It was like I had autumn wrapped up right in front of me. 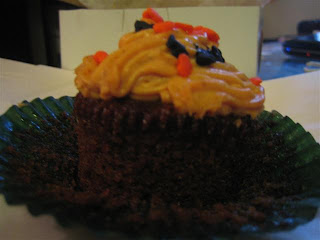 An then I saw the inside. 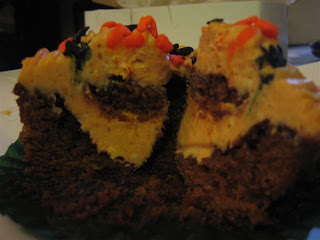 Wow! This had a lot going on.

Now I had been a little worried because these ones had been in the refrigerator and sometimes that kills the cake.

Now if the smell was any indication of the flavor capacity of this baby, I was blown out of the park.

There was so much going on in this cake..the chocolaty thick Guiness cake, the rich creamy pumpkin cream cheese filling, the pungent and powerful pumpkin in the icing.

It was almost a little too much. I could only get through half of the cupcake and I felt little overloaded.

I think that the cake was so rich that having both a frosting inner and icing outer was a little much.

However, separately everything was fantastic!

Not all of their cupcakes had filling in the middle and next time I think I would try one of them. But the shop is super cute, the staff are super friendly and hey..they had some free brownie samples on the counter..what more do you want in your dessert shop.
How Sweet It Is