August 28, 2008
I had a half day of work last week just for the hell of it. I realized a little too late that summer was almost over and I wanted to enjoy it a little more. It was a perfect day outside- 80 degrees and sunny. I decided to take myself out to lunch and soak in some late summer rays.

I got out of the subway in Soho and thought I would wander around a little bit and find an outdoor place. Well I had really only gone about 10 feet when I saw Spring Street Natural.

I walk home from work by this place at least twice a week. The tables are always occupied with the Soho shoppers and tourists of all kinds.

Today there was actually one small rickety table unoccupied in the sunlight. Just what I was looking for- I grabbed the seat.

The table itself wasn’t actually rickety. It just happened to be right on top of those grates leading into the restaurant cellar.

Okay- I have a serious phobia of those grates. I don’t even walk on them in the city because I am so scared of them opening up and swallowing me whole.

Luckily, after shifting around my seat here and there I was able to at least get my seat onto the sidewalk and stable ground. I figured only my food would be lost now if the grates opened and I would be safe. I decided to order a glass of wine though just to sooth my nerves :)

This place boasts itself as a neighborhood restaurant that focuses on serving up fresh, healthy food at affordable prices. Apparently they try to serve foods that haven’t been processed.

All I know is that they had a special swordfish sandwich with roasted garlic mayonnaise which sounded really good!!

So I placed my order and a basket of bread arrived.

The man put the bread down so quickly I barely even saw him at my table. It was almost like the bread appeared out of thin air! 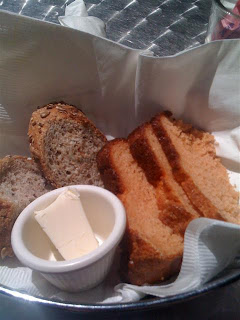 First I tried a bite of the multi-grain which was really thick and tasty. Unfortunately this place suffers from the rock butter syndrome which was so hard I thought I was going to slice my hand open trying to spread it on the bread.

Well the other kind of bread didn’t look like it required butter so I tried a bite of that next.

Yum! This was excellent. For the life of me I could not figure out what it was made of but it was moist and slightly sweet with a great tangy bite at the end. I found out later from the waiter that it was their house made tomato bread.

Tomatoes-I eat those damn things everyday and I never would have guessed that was the flavor!

Well about 3 minutes after I had ordered, my fish sandwich arrived.

Now if I was a busy Soho shopper or someone on a lunch break, the quickness of the order would have pleased me.

I was kind of more into relaxing and enjoying the sun so I found this a little too fast. It also made me wonder about the quality of my meal because really! How can they put it all together in that time?

Luckily my fears were for naught because the sandwich and fries were piping hot and right off the griddle. 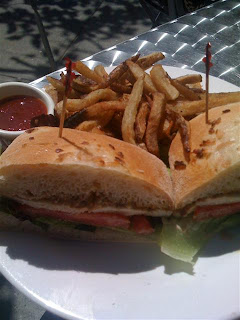 The swordfish sandwich was good albeit a little boring. The fish was a little thin in texture but the buttery toasted onion ciabatta roll made up for it.

The roll was soft and squishy with plenty of pores to soak up the garlicky goodness of the mayo on top.

The hand cut fries were a little hit or miss, as it seems is always the case with this style. Some were soggy and limp because they had been cut too big, but the ones that came out crispy simply rocked! I only wish they could have all been cooked that way.

So I sat there munching on my sandwich and happily enjoying my spot in the sun. It was nice to people watch on the busy sidewalk and enjoy the last days of summer with a peaceful solo lunch.

Not too shabby for a glass wine and a sandwich! It really hit the spot as well. A pretty good place for a quick bite.

And FYI I didn’t fall through the grate. Whew!!
Spring Natural