BBQ Face Off!! Dinosaur vs. RUB

August 06, 2008
So we went out to two BBQ dinners this past week and I have to compare them since we got basically the same things.

Okay- just to start- I have eaten at both RUB and Dinosaur BBQ before, although the dinosaur I ate at was in Syracuse, but I knew what to expect walking in.

At Dinosaur we started off by splitting an order of their Honey BBQ and Garlic Chipotle wings. 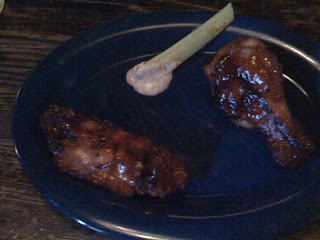 This is one of each and once I saw them coming to our table I couldn't help but smile.

These were actual wings!!

They were big, meaty and oh so close to the Buffalo wings I grew up with!!

The Honey BBQ sauce was nice although I thought it could be a little sweeter
The Garlic chipotle however rocked!!!

They had an excellent smokey garlic flavor which just enough spice at the end to leave your lips and mouth burning for a few seconds after.

For my main I ordered the 1/2 rack BBQ Plate that came with a choice of two sides and cornbread. 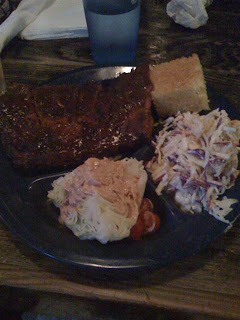 The ribs were just as I remembered from Syracuse. Meat that was juicy, moist and covered in a sweet, tangy and thick BBQ sauce.

I was pretty boring for my sides, I admit. The coleslaw was alright but I've had better. The iceberg wedge with blue cheese was nothing special but it was nice to see salad offered as a side at a BBQ joint.

It made me feel little bit better about all of the red meat I was consuming.

Everyone also got a piece of cornbread that was so moist it must have been made with about four sticks of butter. No joke.

Three nights later we found ourselves at a neighborhood joint RUB. We decided to order the same stuff and check out the differences.

Here is our order of buffalo wings. The wings were a tad smaller than Dinosaur's but still bigger than most. The sauce on these were pure spicy BBQ with a salty kick. 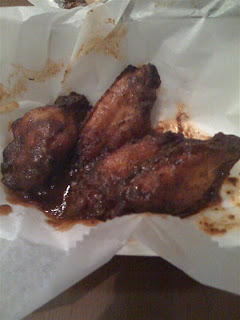 These were good but I found the sauce a little too salty for my tastes although I did enjoy the bbq flavor.

Here we split a full rack of St. Louis style ribs with an order of BBQ baked beans and coleslaw on the side. 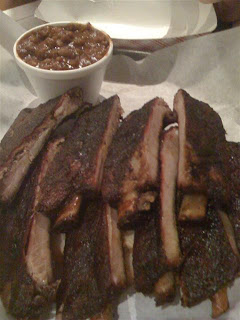 We had a full rack at RUB so we got both the long and short end of the ribs.

I have always loved RUB ribs. They are moist and beefy without tons of fat. The sauce is good as well, but I usually add a little more of the spicy sweet sauce on the side to give them a little more flavor.

The sides at RUB are really great.

It's one of the few places where I can get vinegar based coleslaw rather than mayo. And Mr. T swears they have the best baked beans in the city.

They are thick, rich and have burnt end pieces swimming about. Quite decadent!

So here's what it breaks down to.

Dinosaur had huge juicy wings that almost stole the show from the ribs- 1 point Dinosaur
Dinosaur's Ribs were more moist than RUB and had such great flavor that I never even thought about adding more sauce- 2 points Dinosaur
Dinosaur gives you free buttery cornbread that is awesome. RUB gives you wonder bread- 3 points Dinosaur
The beans and coleslaw at RUB are pretty awesome although Dinosaur gets a little nod for having lettuce as a side offering. 1 1/2 points to RUB 1/2 to Dinosaur
RUB aesthetically is alright but kind of small and cramped where as Dinosaur is a large, boisterous, fun place. 5 1/2 points Dinosaur
RUB is 3 blocks away. Dinosaur is about an hour subway ride- 2 1/2 points RUB

So there you have it. Where it matters most Dinosaur is the big winner.

Not to say I don't still like RUB...Its just not on the same level as Dinosaur for ribs and wings. Dinosaur is BBQ the way I like it and I guess that just makes me an up state kind of girl:)

My goodness how I love meat!!
Dinosaur BBQ RUB

Pitted Pruner said…
I see that you hold the Honey BBQ wings at Dino BBQ in high regard, but how do they stack up against the Honey Butter BBQ wings at the world famous Bar-Bill Tavern? Also, now that Dino has won the first leg in the BBQ challange, I think that Blue Smoke should now challange Dino for the BBQ belt. Keep us posted.
August 8, 2008 at 8:43 AM

Tasty Trekker said…
Ah yes...Nothing will ever beat the Honey Butter BBQ Wings at Bar Bill. Those will always be the best! But if Bar Bill started to make a garlic chipotle sauce like Dino's??? Now that would be interesting.

Anonymous said…
Great Blog. Mike left me with his computer and your blog and have been enjoying it. Have only been to the Dinosaur of the restaurants on your list but you are right on.

Don't know how you keep your figure from all the eating that is going on.