August 19, 2008
This is going to be kind of a quick post. We've been so busy lately with guests it's been a little ridiculous. I am kind of happy the summer is ending so stuff will slow down but also sad because summer is over :(

Anyway, Mr. T had family in town so we wanted to meet up for dinner at a casual fun place. I figured Mercadito Grove would be a good because we could sit outside in the sun and they have a bunch of vegetarian options.

I made reservations a week before for 8 people outside.

The day of the dinner I called the restaurant to confirm and was told they had no reservation recorded.

I was a little upset but said okay then can I make one for 8 people outside.

The man then tells me they can't sit that many people outside.

Okay now I'm a little pissed. I wouldn't have suggested this place if I hadn't had a reservation outside. Not only that but we already planned the entire night around going to this place. We argue a little and then he says fine. Come in by 5:30 and we'll seat you outside.

Well 5:30 rolls around and as we walk up to the restaurant I see all of the outdoor tables filled.

I walk inside and the host says "oh someone called and I explained to them you would be sitting inside and they said that's fine."

Please pardon the use of the O Rly bird but this is exactly how I felt.

Obviously this guy didn't realize it was me that he talked to and was trying to pull a fast one. I could feel my blood pressure rising as I looked at the tiny table inside that was supposed to fit our large group comfortably.

Not wanting to cause a scene I close my mouth and take a seat. The tables were so small that we end up smashing a couple glasses in the process of sitting down. Not exactly how I wanted to night to start out.

Once seated the host comes over and tries to sell us on doing this tasting menu that is going to cost a lot more than we were planning to spend. Once he FINALLY stops talking we tell him we are just going to do the regular menu.

He seems a little perturbed but turns and leaves us to decide.

Okay I'm not going to keep going on about this guy because it's obvious he's an idiot and the rest of the dinner ends up going pretty well.

The important stuff in the end is the food, right?

I ordered the fish tacos which are hands down the best in the city. 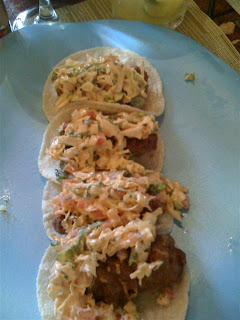 They beer batter some Mahi Mahi and serve it with a Mexican style coleslaw and a chipotle aioli.

The tacos are pretty small for the price but they are really good. The fish is nice and crispy and the chipotle gives it a spicy kick at the end.

The margaritas are pretty good as well. They use only fresh fruit and come in all different flavors like pineapple, mango and even habenero.

Fresh fruit make such a difference! I always feel so full and gross after a frozen margarita. These guys I could drink a ton of (which might not be such a good thing)!

In the end Mercadito was okay but I wouldn't go back to that location with a group again. I have had much better service at the East Village one and no attitude at the door.
Mercadito Grove