One of the Worst Meals of my Life at Ushi Wakamaru

August 11, 2008
Okay, I want to preface this post by saying that I really don't enjoy giving bad reviews. Who Does? I wish every meal out could be a fantastic culinary experience.

But you know what? That just does not happen all the time. And it really didn't happen to Mr. Trekker and I this past Thursday night.

It started out nice enough.

We meet up after work at Pegu Club where we enjoyed some really tasty cocktails.

When I walked inside I immediately fell in love with the look of the place. Long hardwood floors and candle lit tables gave the room a hip but cozy feel. I ordered the Pisco Punch which is pineapple infused pisco brandy with grapefruit, lemon juice and lime syrup. 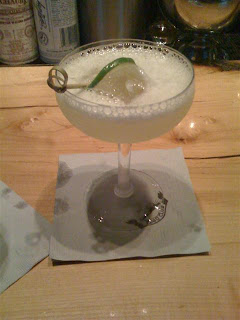 It was so tasty I easily could have had four or five of these things. Dangerous for sure.

Mr. T tried out their signature Pegu Club cocktail and the Tantric sidecar which were both awesome although definently stronger than my Pisco Punch.

After a couple drinks we headed across the street to Ushi Wakamaru for what I thought was going to be a fantastic Japanese dinner.

It was not to be. I am kind of sorry I didn't take pictures but honestly they probably wouldn't have done this review any justice.

Things were bad from the start. We sat down and were given our menus. After looking over them briefly we decided what we wanted and then waited. And waited. It took about 15-20 minutes before anyone acknowledged our presence. Finally a waitress came over and took our order.

Luckily she was much quicker in bringing out our drinks.

Maybe a little too quick.

About 2 minutes later she comes out with Mr. T's sake and my glass of wine. As I go to have a sip I notice something brown floating in the bottom of the glass. Now this isn't just a small piece of cork...This is something quite large and gross looking, possibly some sort of food but I couldn't really tell.

We flag down our waitress and show her and she quickly takes it away and brings me out another glass.

Whew..A couple bumps in the road so far but I'm hoping things will get better once the food comes.

Our first order, the special Toro negori with Bonita flakes. Out comes a bowl with what looks like ground up tuna with some black chunks in it.

The Toro has the consistency of slimy baby food. I could hardly pick it up with my chopsticks because they just went right though it. And the taste..well it kind of tasted like slimy baby food as well. It was so gross texturally I couldn't even get down more than a bite or two. Mr. T was able to eat most of it but kept saying, is it supposed to be like this, with every bite.

Next came the black cod miso.

The cod was so overcooked it was difficult to even cut into it. The protion was tiny as well but out of all of our dishes this was to be the highlight of the meal.

At least it was at least edible.

Next out is our Japanese Beef Sashimi. Five tiny triangles of beef that were so oily and gristled they were disgusting. Mr. T likened the taste to what we assume dog food would be like and I agreed.

Mr. T had gotten an order of soft shell crabs and was busy trying to enjoy those.

About halfway through he stops and says, "something is wrong with these" He couldn't put his finger on it but decided to stop eating them.

Not being a soft shell crab eater I couldn't weigh in but I applauded his decision to stop eating them if he was unsure about the taste. Unfortuntely it would be too late.

The abalone came next and fared no better. Mr. T discreetly spit his first piece out because it was too tough to even chew or swallow.

Upon inspecting the other pieces we realized this was the case for them all.

At this point I just wanted to leave but we only had one more thing coming out which was the eel sushi. I took one look at it and knew I wasn't even going to give it a try.

At this point I look over at Mr. T and notice drops of sweat coming down the side of his suddenly very pale face and I realize he is about to be sick.

Those soft shell crabs didn't taste funny for no reason.

But one look at Mr. T and I know he just wants to pay and go, so he can be sick outside rather than in the restaurant.

So we do. And the entire rest of the night we are both sick.

This is by far the worst meal I have ever had and I will never be returning to Ushi Wakamaru.

I have no idea how it gets such good reviews, maybe we just had an off night but I really don't think so. The quality of all of the food was so bad and the cleanliness of the restaurant as a whole is seriously in question.

With so many great Japanese places in the city like Shushi Yasuda, Abiyura Kinnosuke, Le Miu...why would anyone go here?

It is the one place that I don't think deserves my second chance.
Pegu Club Ushi Wakamaru