The Best Dumplings in Chinatown

I honestly am not even sure that's what we needed but it seems like we are always buying something that requires a new cord or cable.

I had been walking around the Seaport earlier because I hadn't been there all summer.

BTW I wasn't missing much! At least on the main drag of the Seaport itself. It was overrun with tons of people! More than I have ever seen! I could hardly move there were some many people and so many different languages going on I felt a little woozy.

I did find a nice calm street right off the strip though.

Front street actually was completely empty and filled with lots of cute shops and restaurants.

That's why I love New York. One block can make a world of difference!!

Anyway after we were unsuccessful finding the cord (or whatever it was) Mr. T needed we decided to walk over into Chinatown a little and get some food.

We couldn't decided what we wanted. Noodles, Pork Buns, Beef Jerky...We finally decided to walk all the way through and go to Prosperity for some Dumplings.

Prosperity Dumplings is a tiny little storefront that can really only fit about 6 people eating inside comfortably.

Although there s usually many more people than that.

Luckily it was kind of an off hour so we placed our order and grabbed a seat on the side.

We started out with an order of the Steamed Pork Dumplings. 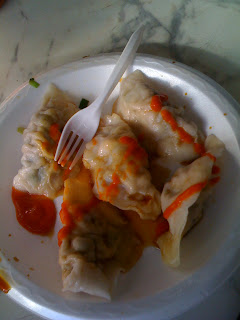 Oh Yum! These babies were steaming with pork goodness!!

That orange stuff on top is hot sriracha chili sauce which we douse the dumplings in. Prosperity also offers a soy vinegar sriracha sauce that is almost as strong as the chili sauce! We like to put a little of both on our dumplings.

What can I say- we're greedy!

We also got an order of the pan fried pork dumplings which are simply fried instead of steamed so they have any excellent crunch on the bottom and top. 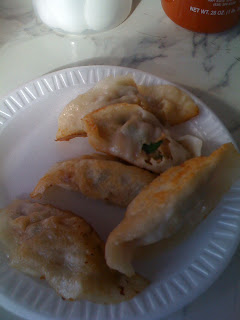 I like the pan fried a little better than the steamed. Almost anything that's fried is going to taste better!

We gobbled these up like we had been on a starvation diet all week! They were just really fantastic!

Oh and the best part of all- the cost!

It's okay to swear out loud right now. The first time I went there I said Holy Shit too!

That's a bargain. And a tasty bargain at that.

Don't expect any frills- this is a no nonsense dumpling house. You get in, order and get out. But it's excellent.

Try the sesame pancake as well- you won't be disappointed!
Prosperity Dumplings