Seymour Burton- Does It Get Better Than a Burger Fried in Butter?

February 02, 2008
We were hanging out in the LES this past Saturday having some drinks at Marshall Stack when I got a huge burger craving. And not just any old burger - I wanted a good gourmet style burger. I remebered hearing about a new place Seymour Burton opening up so we decided to head over and see if we could grab a table.

From the outside Seymour Burton struck me as odd looking. It's on sleepy East 5th street which houses Sophie's and Lavagna. For some reason the outside didn't seem to fit on that block. It was a little too bright and sterile looking. Once I went inside though the place felt much better.

We were greeted at the door by the chef. Now this has never happened before. We asked for a table for 2 and got the last one available. They had a large communal table that ran down the center of the room that was open but reserved for a private party.

The place itself was nice. They made good use of the amount of space avaiable. Besides the communal middle there were tables on either side, and the back was the open kitchen. I always love an open kitchen It just makes it more exciting.

The walls were painted red and kind of worn looking. Not in bad way! The whole place felt lived-in. It was kind of cozy. Unfortunately though I had an extremly wobbly chair and the whole meal I was kind of afraid that it would collapse at any moment. Luckily it didn't but that's something they should fix.

There are no printed menus here. Everything from food to drinks is written on the Chalkboard aganist the wall.

The first thing I noticed was the beer selection. Every beer except Pork Slap was from the Ommegang brewery. Ommegang makes all Belgain style beers which Mr. T & I love so we were really excited. Unfortunatly I had already had a bunch a "big" beers at Mashall Stack so I needed to put some food in me before having another one so I just ordered a Pork Slap while Mr. T got the Witte Beer.

There were wine glasses on all of the tables and when the waitress came over with our drinks she asked if I wanted my Pork Slap in the wine glass! I thought this was really funny! So I said sure- why not! And I have to tell you it was pretty damn good in that wine glass.

Well anyway, we were both starving so we decided to start with an order of Latkes and then get the burger and macaroni & cheese for our mains to share.

We placed our order and they brought over some bread and this. 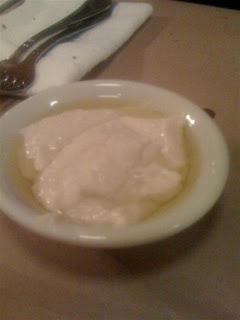 This is hummus and olive oil together. Pretty untraditional but pretty awesome!

Then out came our Latkes.

These were enourmous. I was not expecting them to be so thick. Somehow the entire Latke stayed really crispy even though it was so large. I thought these were pretty good. I still enjoy Zum Schneider style of Potato Pancake the best but I would give these a close second. 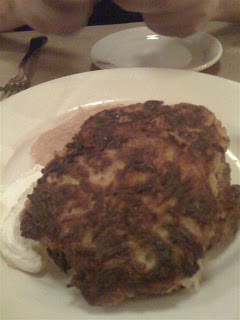 Once we finished the latkes we were pretty full. As I said they were huge! But we still had tons more food coming. Offdah..Luckily we decided to split the rest. 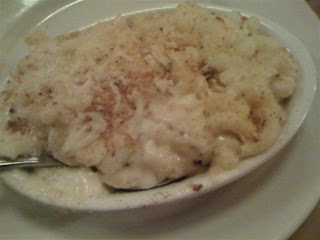 The Macaroni and cheese was a generous portion of elbow Macaroni topped with three different cheeses and breadcrumbs. 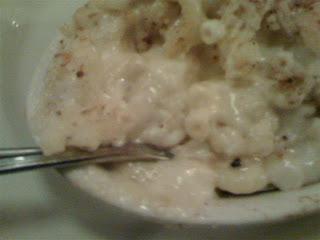 The cheese was nice in that it kept some of it's stringyness so that when you pulled your fork away some would linger on the bowl.

Th best thing of the night though has to be the burger. 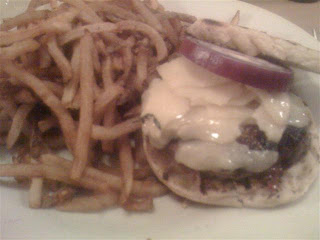 It came topped with Vermont White Cheddar cheese and raw onions atop a huge English Muffin. The juices were already starting to stream out onto the muffin before I even bite into it. This was super juicy and amazing!!!

The meat had that great salty char that every burger should have but rarely does. The chef came around and I asked him what kind of meat he used. He said it was 50% chuck and 50% brisket which is formed and then fried in butter.

Something about the way he said it just made it seem so bad. But hey a burger isn't healthy anyway so why not go all out! Yum!!! I was in love. 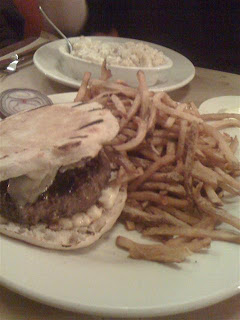 It came with a huge pile of fries that were similar to the fries I get at a local takeout cheesesteak place Ziggiz. The small ones were nice and crispy while the bigger ones were kind of limp. They were decent but could have been a little more uniform. All in all though a great burger. 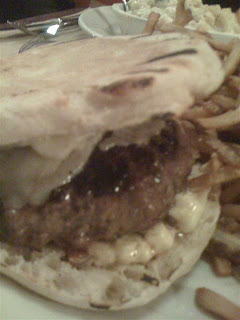 We were so full we couldn't even come close to finishing the mac & cheese or the fries. We decided next time to either just get the Latkaes or just the burger. Both is way to much. The bill came and we were happy with the prices. Quite an affordable place.

The chef came over again before we left to make sure we liked everythng. I thought this was nice and he seemed to have a friendly rapport with our waitress which is always nice to see as well.

Seymour Burton is a great addition to the neighborhood. We will be back- maybe sooned than later. That burger is calling my name!!

What's up hun? How you been?

Thanks for the comments.

I read about Seymour Burton the other day from the New York Times' Frank Bruni who said this burger approaches greateness. Here's the link:

Thanks for the comment. Ziggiz Rocks. Those fries from Burton look money too. Look forward to seeing more reviews from you.

I commented to you on my site and left you an interesting question. A bit of a challenge. check it out.

Thanks for the response. As far as waffle fries go, I've never experienced them in any way shape or form except the frozen variety at places like Big Nick's. It would be pretty killer if someone whipped up some fresh ones, huh?

I like your selection of fries, they're quite diverse. Les Halles' were delicious. I had them a few weeks back and I have to agree, being packed in like sardines takes away from the experience a bit, but the food was great.